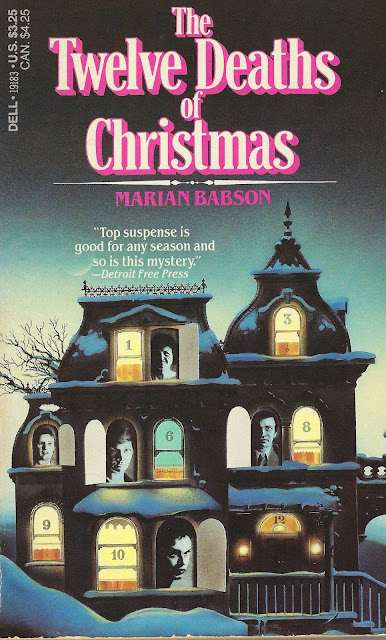 I am still in a holiday mood on the 2nd day of the new year, so I am writing about my last Christmas read from mid-December. The Twelve Deaths of Christmas is set in a boarding house, and based on the title it sounds grim. But it is more of cozy mystery, although there are many deaths throughout. Published in 1979, the story is old-fashioned and I liked that. Random deaths are taking place all over London, although the police suspect that one person is causing all the deaths.

Most of the narrative is focused on Christmas preparations and plans at the boarding house and the killer's thoughts and and activities. The killings are haphazard, not usually planned in advance, so the series of deaths seem to be the perfect crime with no links to the killer.

Iris Loring, a freelance artist, serves as the character who introduces the tenants of the house. As a distant relative of Maude, she has her room for free in exchange for serving as the housekeeper. As the tenants enter and return to the building each day Iris meets then as she does her chores and decorates the hallway for Christmas.

Again the style of each chapter feeding hints about the villain but leaving the reader dangling annoyed me (as in The Hunting Party by Lucy Foley), but overall the story is a page turner and a fun Christmas read (and short). The setting of the boarding house is an appealing one. A group of disparate persons, some young, some older and retired, provide some interesting characters and relationships. The policemen on the case do not play a large part, but the characterization of the two men is very well done.

My impression is that Marian Babson wrote many mysteries, but with variations in style, so I think it will be worthwhile to follow up on some of her other books. They don't show up a lot at the book sale so I shall have to make and effort to find some. (Any suggestions are welcome.)

Curt Evans at The Passing Tramp has written a couple of very informative posts with an overview of Babson's career and a focus on one of her novels.

See reviews from Richard Robinson at The Broken Bulhorn and Kate at Mystery Please.