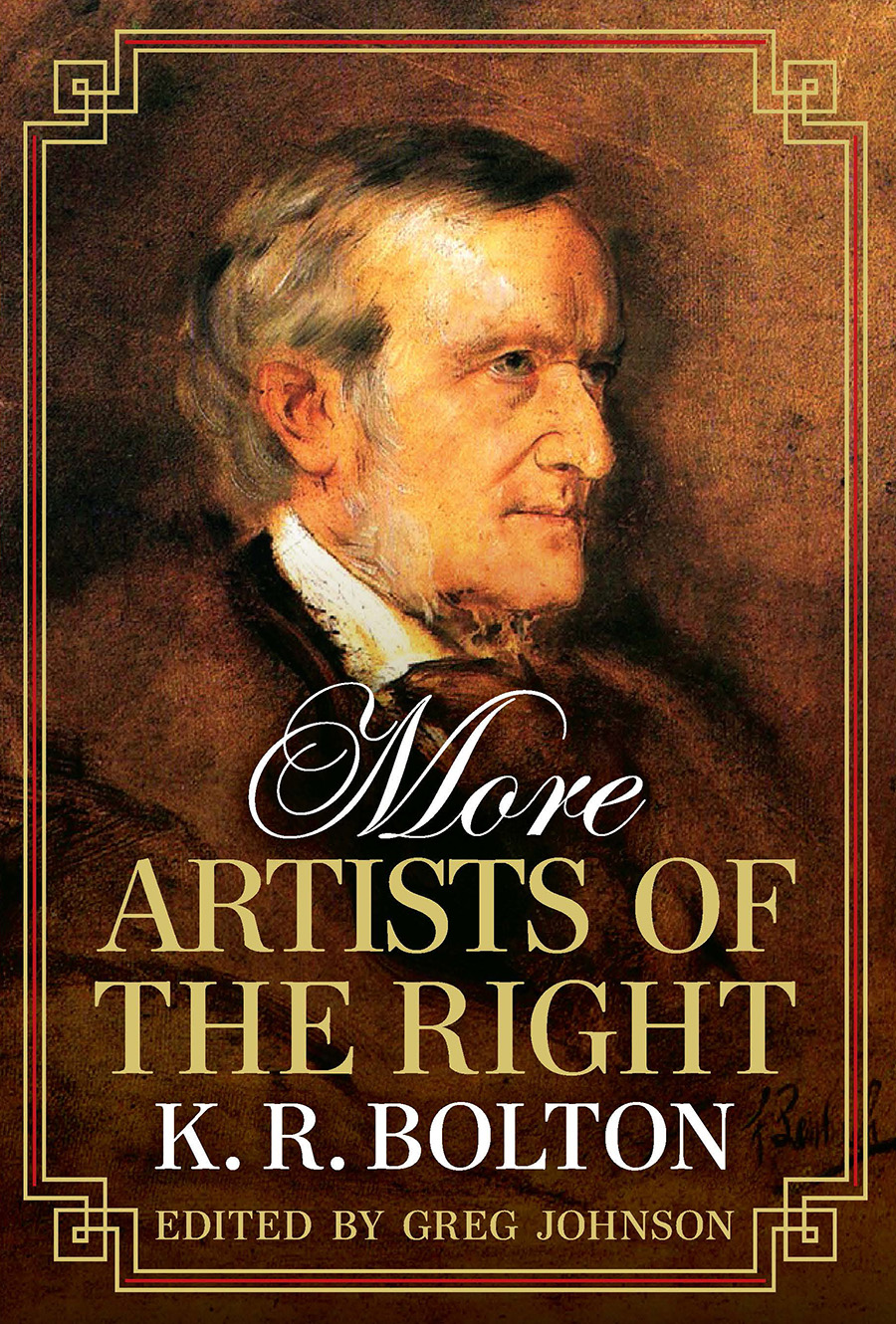 There are three formats for More Artists of the Right:

How to order More Artists of the Right:

There are three ways you can send payment:

To use a credit card or bank transfer please email orders@counter-currents.com

Steps for paying with crypto-currencies:

About More Artists of the Right

It is a perennial embarrassment to the Left that some of the greatest creative minds of the 19th and 20th centuries were men of the Right, and not just conservatives, but men of the far Right, such as fascists and National Socialists—or their precursors and fellow travelers.

Praise for the first Artists of the Right volume

“Kerry Bolton’s book Artists of the Right blows away the notion of right-wing philistinism and, instead, leads to a radically different assessment of the arts during the first half of the 20th century. For it now appears that almost every significant artist of the period rejected both materialism and the egalitarian solutions of the Left. Bolton’s analysis is brash, opinionated, peppery, honest, and trail-blazing. In the biographies of his major figures he tends to include the material which is habitually left out or skirted over.”

“Kerry Bolton is a maverick among scholars. In Artists of the Right he distills for us the political, social, and religious thinking of some of the most outstanding artists of the 20th century in infinitely readable prose. This is a book that belongs on the shelf of every free-thinking patriot and defender of European man.”

“K. R. Bolton’s Artists of the Right is something that we have needed for a long time: a clear and unapologetic study of those literary and artistic figures of the last century who explicitly and forthrightly rejected leftism and left-liberalism. Marxist and socialist ideologies are too easily assumed to be the natural badges of modern artists. Bolton shows that was certainly not the case for a great many major figures of the 20th century. His straightforward exposition of the lives and work of these men shows two things: first, that many important poets, novelists, and thinkers of the 20th century were profoundly rightist in their political views; and second, that they by no means presented a seamless front of solidarity in their opinions. Their independence of mind saved them from leftist groupthink, but it also guaranteed that even among themselves they would be strongly divided on many issues. Bolton’s approach is sympathetic and appreciative, and that in itself is a welcome departure from the condemnatory or patronizing tone that a typical liberal academic would have brought to this task.”

“Kerry Bolton is the Noam Chomsky of the New Right. His double doctorates in theology and encyclopedic knowledge of 20th century history qualify him as a guru, and as such I recommend his writings on geopolitics, culture, and spirituality to anyone with more than a passing interest in these subjects. Every day since VE Day has been a Marxist holiday for the culture makers of the West. Artists on the Right is a declaration of the manifest bankruptcy of this legacy.”

“Eye-opening, exhilarating, and inspiring, Bolton examines figures both familiar and almost unknown, constructing a counter-canon to show that, no matter what your teachers told you, the great minds of the 20th century were culturally, politically and spiritually of the Right.”

The post More Artists of the Right first appeared on Counter-Currents.