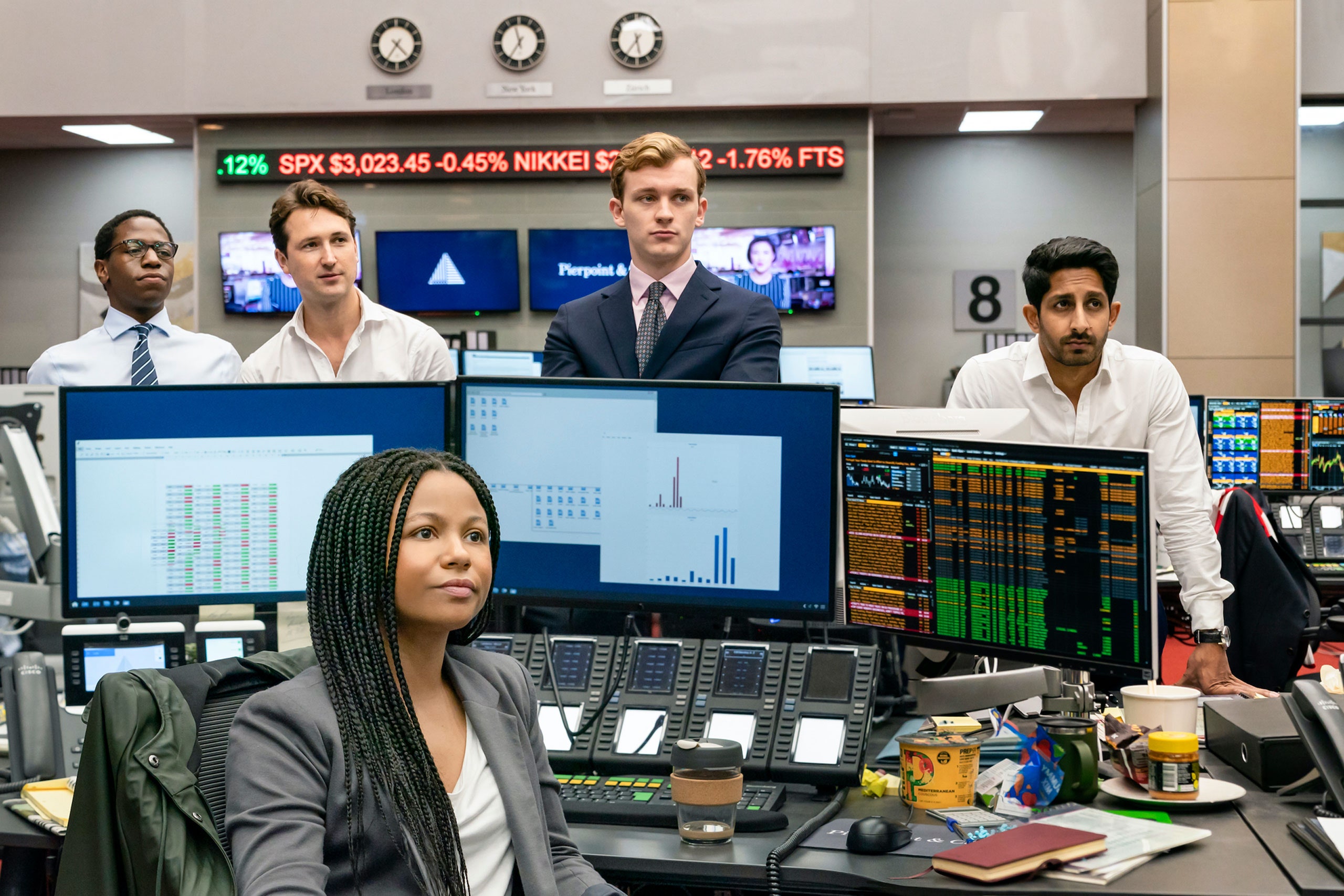 The Thatcherite Brutality of “Industry”

I kept thinking back on this scene as I watched “Industry,” another recent British series, now available to stream on HBO Max. Unlike the rich and vivid period setting of “The Crown,” with its geographically and temporally varied vistas, “Industry” takes place in the very recent past of 2020, and depicts a tightly framed milieu: a group of entry-level employees at Pierpoint & Company, a fictional investment bank in the City of London. Much of the plot unfolds on the charmless trading floor, which is scattered with plastic takeout containers and coffee cups and energy-drink cans—the sticky, linty detritus of long days spent unblinkingly in front of computer monitors, attempting to turn a profit. The show’s protagonists, recent university graduates, who are the lowest on the bank’s totem pole, have six months to prove their utility to Pierpoint in order to receive permanent job offers; at the end of the trial period is an annual culling known as “RIF” (reduction in force). This “Survivor”-like setup, rife with lonely, sleepless nights of feverish plotting and of alliances made and broken—all scored to Nathan Micay’s excellent, nerve-racking electronic soundtrack—determines the harsh tenor of the series from its beginning. “Industry” is unsettling, yet compulsively watchable.

The pilot, directed by Lena Dunham, opens with the characters at their job interviews, in which they answer questions pertaining to their background and career aspirations. “I play third fiddle to two figures in my mother’s life: Jesus Christ and Margaret Thatcher,” Gus Sackey, a smug Eton and Oxford grad (David Jonsson), says. “And where do you stand on them?” one interviewer asks. “One’s the reason we’re all here,” Gus answers, with a smile. “And the other’s a carpenter.” In the world of “Industry,” the bonds of kindness, obligation, and community that Michael Fagan longs for seem like prehistoric relics. This is the free market, which rewards a certain brutality of self-interest. No one cares about carpenters, or house painters, for that matter; and no one questions whether the Thatcherite revolution has triumphed.

Alongside Gus, others interviewing for a job at Pierpoint include Yasmin , a pencil-skirted, pussy-bowed posh girl with a naughty side (Marisa Abela); Robert, a working-class, party-animal Oxford graduate (Harry Lawtey); and Harper, the show’s de-facto heroine (Myha’la Herrold), a Black American grad with a murky past. (Early on, it is revealed that Harper didn’t even graduate from the middling state college that she attended, as she contemplates sending a doctored transcript to Pierpoint’s H.R. guy.) “Mediocrity is too well hidden by parents who hire private tutors. I am here on my own,” Harper says to Eric, the managing director of Pierpoint’s Cross Products Sales (the very good Ken Leung), who later becomes her boss and mentor. “I think this is the closest thing to a meritocracy there is,” she adds. “And I only ever want to be judged on the strength of my abilities.” Despite her unremarkable credentials, this declaration, which might have nearly been delivered by the Iron Lady circa 1982, gets Harper the job.

Harper had been sympathetic to Hari when he was alive, offering him a place to crash when she noticed him looking particularly anxious and fatigued one night. But rather than mourning his death, she appears to gain a renewed vigor and sense of direction in the immediate wake of his passing. She closes her first deal with a major client—an older-woman financier who sexually harassed her at a meeting the night before—and goes through with sending her bogus diploma to H.R. Harper is determined not to be a loser in this game. Unlike many of her fellow-grads, she’s going to secure a permanent position at Pierpoint. Unlike Hari, she is going to live.

But what does living mean, here? The series displays not just the spoils but also the costs of the path that Harper and her peers have chosen. (This type of exploration, mind you, is not for everyone: “I don’t care what happens to these horrible people,” my husband would grumble every time I’d sit down to watch the show.) The spaces in “Industry,” which are rendered in a dingy, pallid palette of grays and whites and blues and blacks, feel deadeningly claustrophobic, not just within the workplace but also without. Outside the office, the grads go fast and hard—the show is one of the dirtier, more explicit programs I’ve seen lately, even considering HBO’s historically T. & A.-friendly standards—but the sex and drugs they indulge in while off the clock are their own kind of labor. Although the debauchery might appear to provide a mindless respite from the characters’s constant jockeying for a leg up, it is, in fact, an indissoluble part of it.

Yasmin, fed up with her low-ambition boyfriend, who lives on her dime and, while handsome, is apparently too indolent even to have sex with her, embarks on an amorous contest with her fellow-grad Robert, taunting him with increasingly suggestive gestures, in what amounts to a sexual game of chicken. In one of the more vanilla moments, the two flirt at the company gym, with Yasmin wordlessly increasing the speed on the treadmill that Robert is running on, as if to say, Show me how fast and hard you’re able to go without collapsing; in a later encounter, she ups the ante, demanding that he swallow his own ejaculate after masturbating. For Robert, meanwhile, whose professional strength is not in numbers or strategy but in showing clients a good time (“This is still very much a belly-to-belly business,” he tells his bosses), working, working out, sex, and drugs all coalesce into one long endurance test, which must be withstood to achieve not enlightenment, nor oblivion, nor pleasure, even, but, rather, domination. After one wild night spent ingesting a grab bag of ketamine, cocaine, nitrous, and MDMA, Robert arrives at the office to represent Pierpoint at a recruitment event for university students. Yasmin, who is also on the job, tells him, “It feels weird to be in a position of power here.” Later, he repeats the sentiment back to her, if not more bluntly: “I reckon I could fuck anyone I want in here.”

Despite the relative diversity of its employees, Pierpoint is peppered with casual instances of sexism, racism, and classism. Early on in the series, Harper is mistaken by Yasmin for another Black graduate—a cringey moment that is echoed in a later episode, when Harper’s ex-boyfriend Todd, visiting from America, is told by a clueless finance bro at a club that he looks “like Travis Scott.” Gus, meanwhile, is also Black, and, when the bank produces a brochure in which his grinning likeness is Photoshopped next to that of an Asian colleague, Robert is quick to point out the opportunism of this corporate claim to wokeness. (“I doubt they’ve ever been in the same room. Look how much they like each other!” he jokes.)

Ultimately, however, such microaggressions are worth bearing in the face of the singular macroaggression of the market. To harness the market, to best it, justifies almost any indignity, and this willingness is also a sort of power—or is, at least, sold as such by the main characters’s superiors. “People like us, born at the bottom . . . that’s intimidating. We intimidate people here,” Harper’s boss, Eric, explains, while the two take a cigarette break outside the office. Reminiscing about an early mentor of his, Eric, who is Asian-American, tells Harper that the man “knew from Day One he could trust me, so I trusted him.” And though the mentor wasn’t big on compliments, Eric continues, “I heard him compliment me once.” “What did he say?” Harper wonders. “That little Chink’s a born salesman!” Eric answers, before tossing his cigarette and turning to reënter the building.

“Industry” is a hardhearted show about a hardhearted world, and it can falter when it attempts to divert from this line. This is especially true when it comes to Harper. Over the course of the season, she lies, wheedles, and plots in order to retain her place at the bank, remaining largely cipher-like throughout, which makes for an internally consistent, albeit disturbing and unsympathetic, character. We are meant to understand her, I think, as something like a character in a naturalistic novel. Harper cannot act differently; she is a product of her socioeconomic environment. This is also why the moments that provide glimpses of Harper’s backstory—a vanished twin brother, a history of debilitating anxiety attacks—feel meagre and unconvincing as explanations of her behavior. Even the other characters seem skeptical. “You know, you play broken really well, but, to be honest, you’re just a bit of a cunt, aren’t you?,” Yasmin tells Harper. This feels similar to a comment that Yasmin makes to Robert at the recruitment event, earlier: “Surely you knew we entered a career that connoted, you know . . . cuntiness.” She is joking, but also not really. In “Industry,” the right to be frail, to be human, is gone. Now, it’s every cunt for himself.

The Thatcherite Brutality of “Industry”