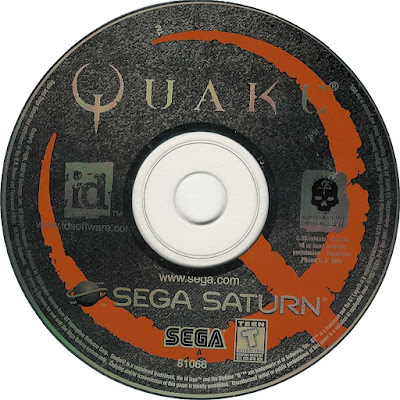 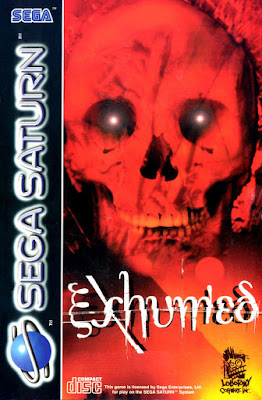 The moment I dipped my toe back into the healing waters of Saturn gaming back in September of 20217, I was immediately hit with a tsunami of experiences, that I had in no way anticipated. The dawn of the Pseudo Saturn in my gaming life, meant that rather than exploring my small back catalogue of bought PAL games, I would be playing the very cream of the Saturn's software offerings on burned CDs and repros…
For the rest of the year and far into 2018, I would predominantly be playing Japanese shmups, provided for me by Junkyard stalwarts, Jon Lee and Daniel Turner. These included the Parodius collection, Darius Gaiden, Wolf Fang, Salamander, Gradius, The Game Paradise, Radiant Silver Gun, Tempest 2000 and Sol Divide. Later in the year I "discovered" a new genre, the puzzle game  - Baku Baku Animal, Tetris Pus and Columns ...and this consumed the tail end of 2018 as we moved into the current year. 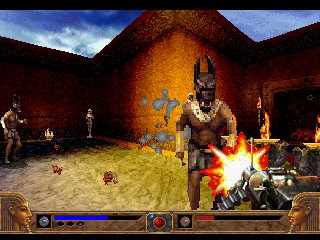 But if 2019 has been defined for me by any genre of Saturn games so far, it would have to be the First Person Shooter (FPS). In an attempt to generate a common topic for our forthcoming podcast, my good friend Mr. Brian Vines (The Virtua Sclub - remember him? He used to write here!) suggested we should all play the game Exhumed. I had had a lot of fun with Alien Trilogy in October, as part of our Halloween games drive... I didn't need much persuasion to try another Saturn FPS as January drew to a close. 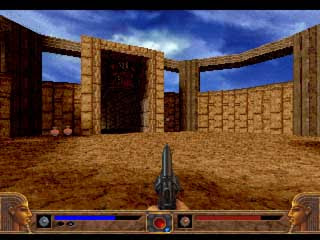 Made popular by the PC crowd in the early 90s, the FPS was an attempt at immersion by perspective, allowing the player to see the end of his hand/weapon only, as if the screen view were the players own eye view... looking down on his own body. This was an alternative to the traditional third person view, where the player's whole avatar could be seen. The incredibly dark and incredibly popular Doom, was the FPS title which captured the gaming world's attention. The game also drew the ire of the nation when the school shooters responsible for the massacre at Columbine, were found to be avid players of the game. The Call Of Duty FPS franchise would become the biggest money spinner of the entertainment world, surpassing the revenue earned by the top music of film releases of successive years... 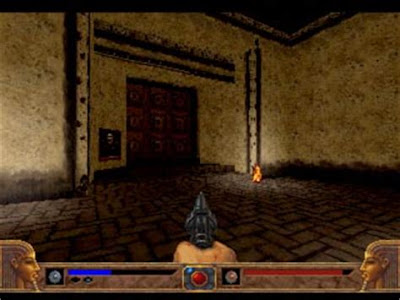 But what about the Saturn? Can it's FPS offerings still hold their own in 2019? Having spent the last month playing three of the Saturn's best, I can firmly state a very loud "YES!"
The three games do not include the afore mentioned Doom, the port of which did not fare well on our favourite console. Instead we'll be looking at a trilogy of games created by Lobotomy software… Exhumed  -'Powerslave'  in the USA, and '1999' in Japan - , 'Quake' and 'Duke Nukem 3D'. I won't be covering 'Congo' , 'Doom' or 'Hexen' (I don't own them yet.) 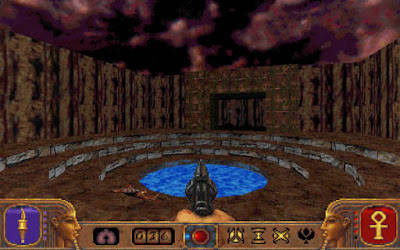 First off - confession time, I have not finished any of these games, so I'm not writing from a thorough, completist perspective. But I have spent hours and hours, much of it a considerably intense time, playing Exhumed - both the PAL and (easier) Japanese iterations - to the point of both weary frustration and intense elation. Bizzarrely, when I needed a break from this endeavour, I would often opt for a session on either Quake or Duke Nukem. So whilst none are finished, I have spent a good amount of time with them all. Enough to see common strands of both excellence and weakness in all three titles... So this is just rambling thoughts on all three, not a comprehensive review by any means... 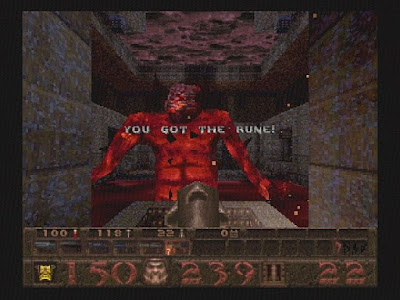 First of all, the common features - all three games are excellent. EXCELLENT! This cannot be stated enough. Whilst many games on the system fare badly compared to ports on other systems, these three games were built from thr ground up for the Saturn, using the Slave Driver Engine developed by Lobotomy themselves. Despite initially poor sales, Exhumed was a critical success and has subsequently become a much sought after game. The Saturn iteration is said to be the superior version of the game... and there are not too many 3D Saturn games that can boast the same achievement! Both Quake and Duke built on the success of that game and owe it's creation a huge debt in terms of their own success. 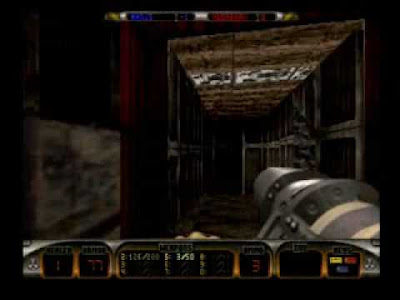 Exhumed is an Egyptian themed, adventure/platform/FPS. The player is required to work their way through a series of tombs, temples, tunnels, watery caverns, crypts and canyons, finding keys treasures and weapons in order to progress. Of course, there are a plethora of mummies, jackal headed minions, jumping spiders, flesh eating fish and secret-containing crockery to shoot and destroy! The graphics and lighting effects are gorgeous and still impress today. The frame rate and movement are buttery smooth and the player progresses through the levels at a pace! The music is outstanding and adds tons to the whole experience...

Like it's compatriots Quake and Duke, this game is HARD. It's a game I've been tempted to abandon on a number of occasions. and is in no way linear or obvious. As platforming is as much a feature of the game as the FPS element, you'll be dying as much by falling off platforms and into lava, as much as being eaten piece by piece or killed outright by one of the game's enemies. The game is hugely reliant on the player's desire for exploration. Only by lots of trial and error (and let's face it, endlessly repetitive, agonising death) will you learn where to go, or what order in which to complete tasks. And herein, lies the flaw with all three games, as far as I am concerned. 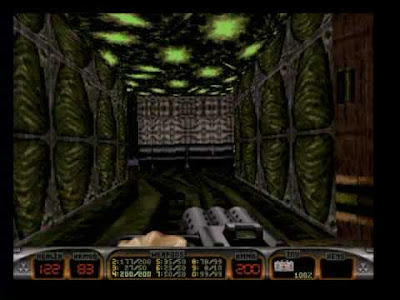 If you had paid £45 (or $45) for this game back in 1996, you would not want to complete it within a day. You might have to make this game the ONLY game you were able to play for a long period of time for financial reasons. Not everyone had public libraries to steal games from, after all...
Once you had forked out a hefty sum for your game, you would want it to present you with a challenge. Something to keep you engaged and intrigued for weeks, perhaps. Nowadays, as a 52 year old gamer, with thousands of titles to tempt me to play, I definitely don't want to be locked into any one game for too long... my attention span and resilience to death, are simply not strong enough to plough on through tough times any more. Although, I do feel compelled to finish Exhumed, usually I just want short spurts of mindless fun, to while away half an hour or so... 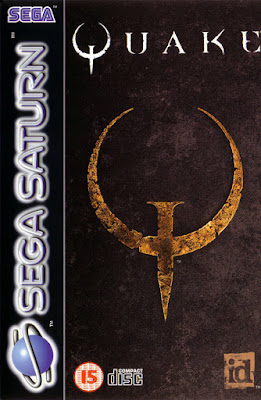 In the dark, angst laden and Trent Reznor soundtracked Quake, level design is clever and intricate, although again, it can be a little too vague at times. Secret areas are peppered throughout Quake and the same trial and error style of  gameplay is required. Whereas Exhumed is clearly Egyptian themed, I don't really know what you would say was the story context of Quake. There is no themed, cutscene driven narrative as there is in Exhumed. As the protagonist, you work your way through a dungeon laden castle full of ogres and grunts, skeletons and monsters, Like Exhumed, there are moving platforms and secret passageways, although the whole  "platforming" element is thankfully missing. The health and ammo system are notably different to Exhumed and although there are some nice lighting effects, the graphics are not as impressive, Quake can look "blocky", pixelated and dated. The gameplay is equally slick, but just doesn't have the exotic flair of Exhumed. 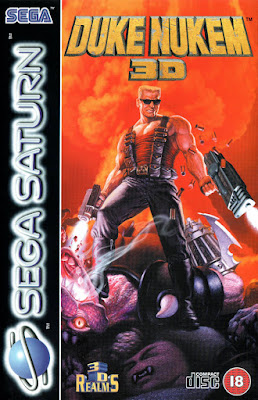 The same criticism could be levelled at Duke Nukem 3D. In this ridiculous B Movie sci-fi plot, aliens have landed and are capturing earth women for various nefarious purposes. Our all American '80s action stereotype, Duke as to rescue them by kicking alien ass. Or something like that...
The whole feel of this game is comedic. It never takes itself seriously. Purposely gratuitous images of women can be seen cavorting on various monitors throughout the levels, although they are so pixelated, they just look ridiculous and therefore no longer shock or titillate. Like the breast jiggling in Policenauts, it seems somewhat cliche'd and superfluous to the game these days, but I think revisionist moralising is a dangerous activity, so I won't dwell on it! The graphics are very different to Quake, with a lighter, less claustrophobic vibe and soundtrack. Duke's in game commentary, where he congratulates himself and comments on the coolness of his exploits, are funny and compliment the silly action nicely! The three games making up Lobotomy's FPS Saturn trilogy are worth playing at the same time for comparison and contrast, but also because they are a hell of a lot of fun! 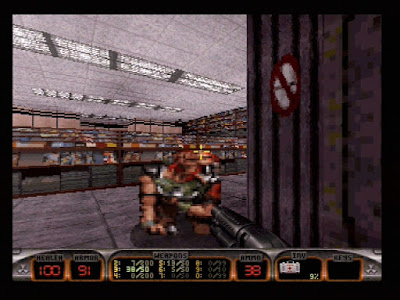 This has been a very scant, whistle-stop tour of a small section of a genre, which has consumed me this year. It wasn't meant to be a comprehensive review of the games, just an explanation of why 2019 has been the year of the FPS for me so far... In order to make up for the shortcomings of this article, I will add some informative videos, including DF Retro's fabulous breakdown of Exhumed!
I will be trying to play both Doom and Congo, before my birthday in May. It could well be the case that these less than spectacular titles are enough to kill my current enthusiasm. 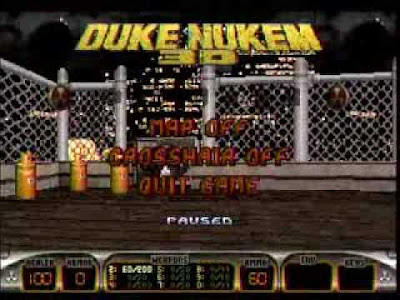