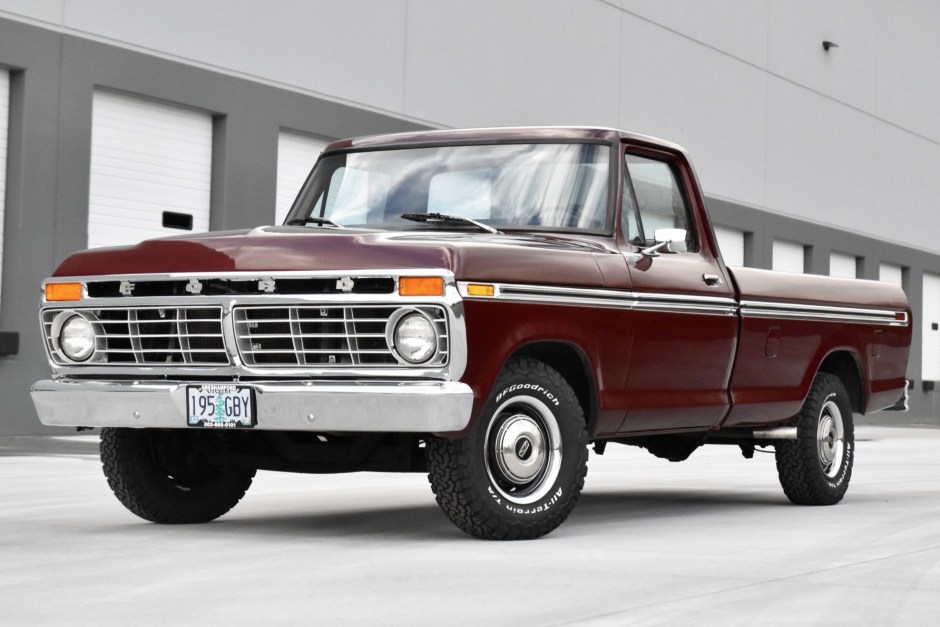 This 1977 Ford F-150 Ranger is a single-cab Styleside pickup that was originally ordered for the Seattle, Washington sales district and is said to have remained under original ownership until 2018. The truck was acquired in April 2020 by the selling dealer and subsequently refinished in maroon over a black interior that was fitted with replacement carpeting and upholstery. Other parts replaced by the seller reportedly include the bumpers, exterior lighting, wheel studs, tires, valve-cover gaskets, carburetor diaphragm, rear pinion seal, and front-brake components. Power comes from a 302ci V8 paired with a three-speed automatic transmission, and equipment includes the Ranger trim package, 15″ steel wheels, Holley valve covers, a chrome air cleaner, dual exhausts, a bedliner, and a Motorola push-button radio. This F-150 is now offered with partial service records and a clean Oregon title. 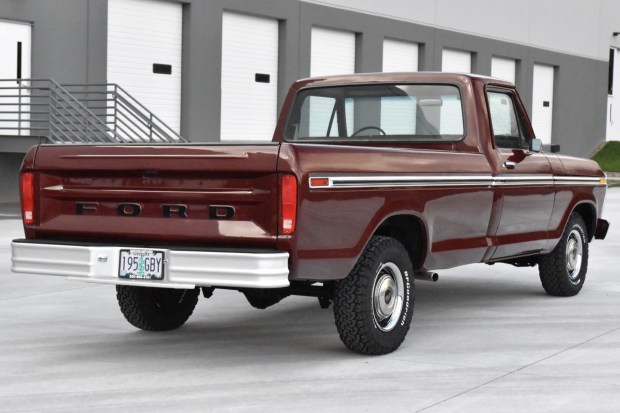 The regular-cab truck features a Styleside bed and a 133″ wheelbase, and the seller had the body refinished in maroon in December 2020. Other work included replacement of the front and rear bumpers, the grille, the tailgate lettering, and exterior lighting. Bright-finished trim and side mirrors are installed, a drop-in bedliner has been added, and a dual exhaust system exits ahead of each rear wheel. Cracks are noted in the grille, and a ding at the front edge of the hood is detailed in the seller’s video. 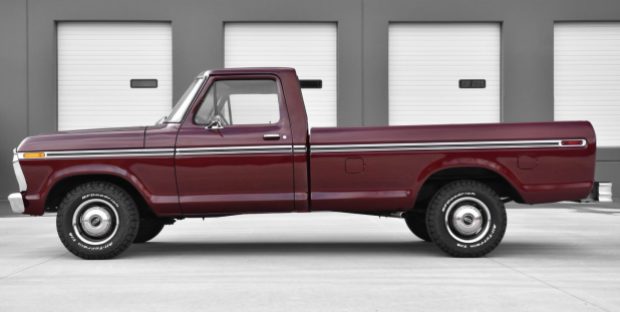 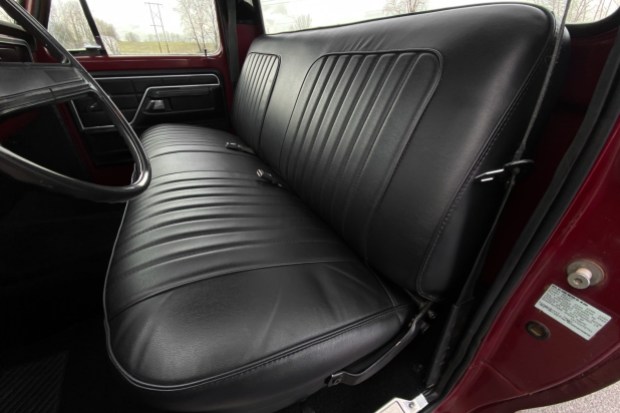 The cab features a bench seat that has been retrimmed in black with a matching dash pad, door panels, and replacement carpeting. Equipment includes a heater, three-point seatbelts, and a push-button Motorola AM radio. 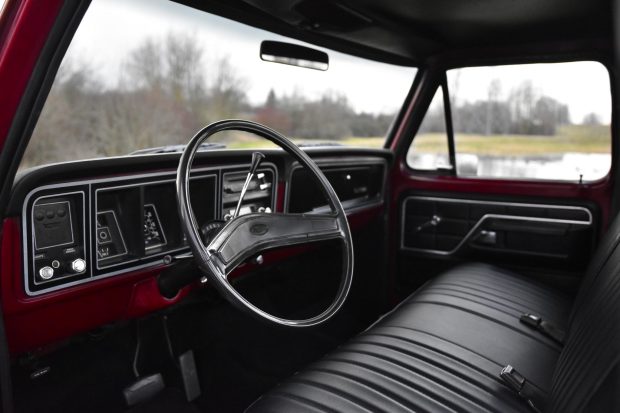 A two-spoke steering wheel exhibits cracks and frames instrumentation that includes an 85-mph speedometer and auxiliary gauges measuring oil pressure, coolant temperature, voltage, and fuel level. The five-digit odometer indicates 36k miles, and the selling dealer indicates that the odometer has rolled over once. 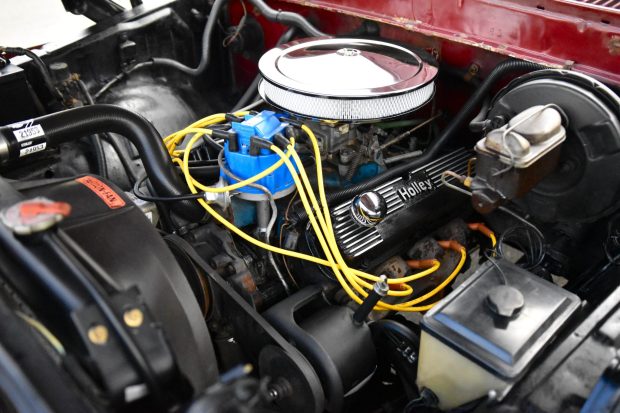 The 302ci V8 was rated to make 130 horsepower when equipped with a factory two-barrel carburetor. Modifications include ribbed-aluminum Holley valve covers and a chrome air cleaner. Work since 2019 is said to have included replacement of the valve-cover gaskets, engine valve-stem oil seal, the PCV valve, spark plugs, and a carburetor diaphragm. 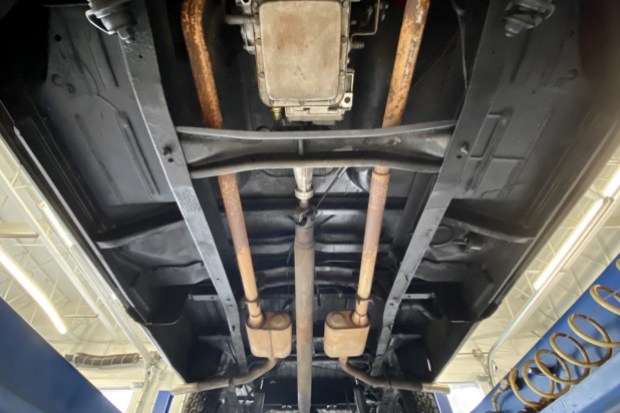 Power is sent to the rear wheels through a column-shifted three-speed automatic transmission and a Dana 44 rear end with 2.72:1 gears. The rear pinion seal was replaced in January 2021 by Paden Drivetrain of Portland, Oregon. Additional underside images are presented in the gallery below. 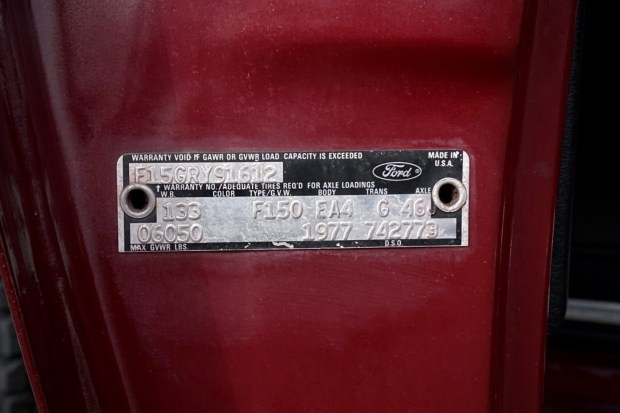 The vehicle’s chassis number indicates that it is a two-wheel-drive 1977 F-150 that left the factory in San Jose, California with a 302ci V8 under the hood. The warranty tag further decodes as follows:

The video above includes a walk-around, a tour of the interior and engine compartment, and an in-cab driving demonstration. Additional walk-around footage from prior to the selling dealer’s exterior refurbishment is also featured, beginning around the 7:40 mark.