Two former health officials have a plan to reopen the economy that, refreshingly, isn’t “just let a bunch of people die, I don’t know, lol.”

Andy Slavitt, former director of Medicare for President Obama, and Scott Gottlieb, former FDA chief for the Trump administration, issued a joint letter this morning calling for a $46 billion investment in a nationwide tracing and testing program. (Uh oh. A Democrat and a Republican agreeing on spending. Maybe it is the end of times.)

The hilarious odd couple of Slavitt and Gottlieb (he never does the dishes and he banned the sale of candy–flavored vapes) says if states want to reopen safely, they need to get better at tracking the virus and offer resources to those who need to stay inside and play video games for 14 days.

“The existing public health system is currently capable of providing only a fraction of the contact tracing and voluntary self–isolation capacity required to meet the COVID–19 challenge,” Slavitt and Gottlieb wrote in a letter to House and Senate leaders.

“Additional support [is] required to allow states to track and isolate infected populations, which will be a vital part of safely reopening the economy.”

To reopen the economy without needlessly killing millions of people, Slavitt and Gottlieb say Congress needs to spend a whole bunch of dough on three public health needs:

Slavitt and Gottlieb’s proposal comes as multiple states begin to reopen barbershops, tattoo parlors, nail salons, and basically any business that involves getting right up in someone’s face and coughing in their mouth zone.

On Sunday, Scott Gottlieb (who reportedly asked the guys on his indoor basketball team to start calling him Scottlieb but everyone thought it was dumb) raised concerns about Georgia’s plan to “take it sleazy and see what happens.”

“Georgia’s certainly jumping the gun I think, getting started too early relative to where they are in their epidemic,” Gottlieb told CBS. “They’re only testing about 1% of the total population.”

“It’s going to take a long time until we see sustained decline in new cases and get to the point where there’s a low enough level of spread in the country that we feel comfortable about opening up parts of the country. It’s going to probably be mid–May, maybe late May in parts of this nation.”

There’s a trope in old science fiction of tossing the word quantum in front of any old term to jazz it up and make it sound a little more science fictiony.

That car? Well, it’s a quantum car now. It can drive through time and space.

This gun? Quantum gun. It shoots particles of quantum energy at your DNA.

But as we move into the 21st century, the word quantum has migrated from my collection of awkwardly sexy sci–fi books and into the daily lexicon of computer engineers and real scientists that don’t accidentally turn themselves into horrific fly–human hybrids.

Quantum computers, more than 3 million times as fast as world’s most powerful computer, are becoming a reality. And governments who know which way the quantum wind is quantum blowing are investing quantum bucks in putting the word quantum in front of things.

Of that, the Department of Energy has requested $25 million be allocated to accelerating the development of a quantum internet. (How’s that for a buzzword salad?)

The quantum internet wouldn’t be much use to ding dongs like you and me. (We don’t need 3 million times the processing power to binge watch whatever crime Joe Exotic is doing in 10 years.) But it has the power revolutionize and reinvent the fields of medicine, science, and cybersecurity.

According to an in–depth investigation by CNBC: Researchers could use it to develop drugs and materials by simulating atomic behavior on networked quantum computers, for instance, and financial institutions and governments would benefit from next–level cybersecurity.

As you can imagine, a whole bunch of countries are pursuing quantum research programs and competing for that first mover advantage.

China has already developed an early application of quantum internet between certain cities. But the Trump administration is ramping up U.S. efforts with its 2021 budget proposal.

“That level of funding will enable us to begin to develop the groundwork for sophisticated, practical and high–impact quantum networks,” says David Awschalom, a quantum engineer at the University of Chicago, told CNBC. “It’s significant and extremely important.”

P.S. Quantum computing (and quantum pants) may be years or even decades down the road. But it may already be too late for investors to get rich off the next generation of internet, the 5G revolution.

According to this new video from my colleague and America’s #1 Futurist George Gilder, you may have missed the boat on 5G. But that doesn’t mean you’re out of luck entirely. George just revealed an opportunity that could be 3x as big. He’s calling it “15G” (George is a visionary but he’s not very imaginative).

Prepare Yourself for Round Two of Crisis

The #1 question I’m getting right now is… when are you restocking the official One Last Thing Warren Buffett body pillow, available soon at the low–low price of $59.99?

And the #2 question we’re getting right now is… “Is the crisis over?”

Stocks are up. And yes, they could continue to go up for some time. But according to our macro–economic expert Graham Summers, the worst may be yet to come.

Graham has the story in today’s one last thing.

We need to be clear about what has happened in the U.S. in the last six weeks, Shane.

The Federal Reserve and the federal government threw trillions of dollars at the issue… but that doesn’t fix the economic damage the shutdown has caused.

After all, do these large–scale bailouts, loans, and quantitative easing (QE) measures:

We don’t know the answer to any of the above. And it’s going to be months before the economy/financial system has fully digested the damage caused by the shutdown/meltdown.

So while stocks are up and could indeed go higher from here… there are several large nasty problems lurking in the financial system.

And from what I can tell, the Fed cannot fix them.

Take a look at the Junk Bond ETF (HYG) to see what I mean.

The junk bond market in the U.S. is a little over $2 trillion. This is a relatively small market. And the Fed has announced it will be buying these bonds with unlimited funds.

This announcement lead to a large bounce in the Junk Bond ETF. However, HYG has since rolled over and is struggling to move higher. 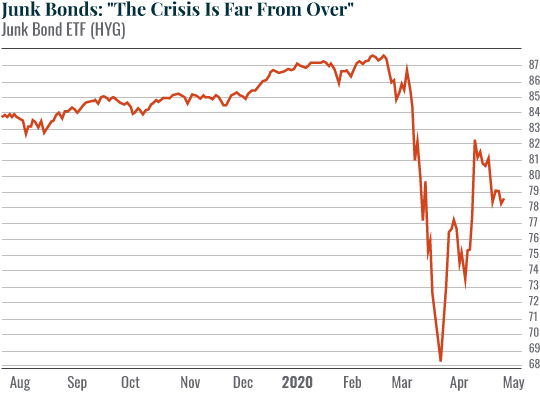 This is happening because the junk bond market knows that even if the Fed spends trillions of dollars buying junk bonds, it can’t fix the underlying issues for the companies that issued these bonds.

After all, if the companies that issued these bonds go bust, it doesn’t matter if the Fed is buying their bonds. Those bonds are still worthless.

This is why I know the crisis is not over. If anything, Round Two is coming in the next few months.

Be careful out there!