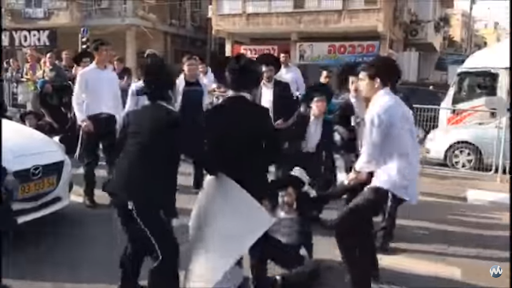 I am not all that surprised. But I am nevertheless saddened every time I see something like this. (see video below).
What has become of us? Where are the ‘people of the book’ that speaks about us as a nation following ways of God. And thereby will be seen by other nations as filled with wisdom?

Young Charedim in Israel were once again involved in a protest (no doubt about the draft issue) were blocking traffic in Jerusalem, angering innocent non Charedi Israelis. Which is not going to make them any friends. And will probably gain them more enemies. Some of whom might even be Charedi
This complaint might seem odd coming from someone that so strongly supports the protests going on in the US right now. But it shouldn’t be. For one thing I don’t support blocking traffic for an undetermined amount of time.
It is one thing for protesters to march down a street stopping traffic for a relatively short time until the protesters pass. That is a perfectly legitimate form of protest. It’s another to sit down and not allow anyone through at all for - who knows how long!
Then there is this. The 2 protests are over issues of a different magnitude of importance. The protests going on in the US (and all over the world) are about fighting the injustice of racism that has been oppressing black people for centuries and taken many innocent black lives. Not to mention the daily indignities that so many black people suffer - while the rest of us hardly even notice. Until something like ‘George Floyd’ happens.
That is not what the protests in Jerusalem were about. They were protesting the ‘injustice’ of  even the slightest possibility of serving their country. A country where others protect them at risk to their own lives while they sit comfortably in their study halls.
These young protesters are mainstream Yeshiva students that are apparently (according to YWN) from Peleg, the Jerusalem faction of the Charedi world in Israel. Whose views and behavior are rejected by other mainstream Yeshiva students of the Charedi world. Who  I believe are in the majority.
And that is precisely the point. They are both mainstream. And not all that different in their religious outlook from each other. They both oppose serving in the military. The only difference is in how to go about accomplishing that. Whether to compromise a bit so that they can continue their exemption as before, or to oppose any compromise that is in the slightest way a concession. Even though it would allow them to remain exempt as before. This uncompromising view is what motives them to act as they do. To protest and disrupt.
They could not care less about who - and how man they inconvenisnce. In fact they seemed to enjoy doing it.
As an aside (and I have said this many times) I could never understand how any decent human being can say as a matter of principle that as a group they should be exempt from being placed in harm’s way while every other group is required to do so. That has never been fully explained by anyone to my satisfaction.

This is not to say there shouldn’t be individual exemptions. There can and should be in many cases. But entire groups of able bodied people should not be given carte blanche in that regard. The risk should be spread evenly among all.  As long as service is mandatory all groups should participate. The only way that an entire community should be exempt is if everyone else is exempt. An all volunteer army would accomplish that. (Which I actually favor – the reasons for which are beyond the scope of this post.) But if I am Charedi and my non charedi brother has to serve, so should I.
For purposes of this post let us leave out my objections. The Charedi world wants exemptions from service for all who study Torah full time. Israel has granted it to them that provided they register. So that if they they decide to and go to work, they would then fulfill their obligation with some form of national service. And then be done without spending one day in the army. That has been accepted by most of the Yeshiva world. But not Peleg.
They are the ones protesting. And they are not outliers. These are mainstream Charedi youth who have bought into the uncompromising position of the late Rav Shmuel Auerbach. He passed away a few years ago. But the movement lives on. I don’t know who leads it now. But it is clear that many followers remain. They are just as mainstream Charedim as those who oppose them. What are often called ‘black hatters’.  Their values are otherwise identical.
There was a lot of understandable anger expressed by people who were prevented from getting through as the protesters sang religious songs, while smirking at the anger and frustration they were causing others. It was almost a carnival atmosphere. They were having fun at the expense of others.
And they think this is OK?!

Because I think it is disgusting and shows a complete lack of values. What kind of a person laughs at the trouble they cause others? (Aside from a psychopath.) Even if their cause were just, that does not give them the right to laugh at people they are causing problems to.  What kind of perverse pleasure do they get from that?!

It is a sickening display of violating Bein Adam L’Chavero for which there is no forgiveness by God unless they first get it from the people they laughed at. And what are the odds they will ever do that? Never mind. I’ll tell you: Zero!
I guess I am not alone in feeling this way. They have finally been confronted by their own. Young mainstream Charedim on the other side of this issue understand the Chilul HaShem they weare making and got involved. They are not going to take it anymore!
God bless them for doing the right thing and minimizing the Chilul HaShem.
That said, I am pessimistic.  I do not see the Jerusalem faction is not going away. Religious Jewish youth fighting other religious youth – both of which share identical values except on this one issue - is something I never thought I would see. And who knows where this conflict is going to lead.