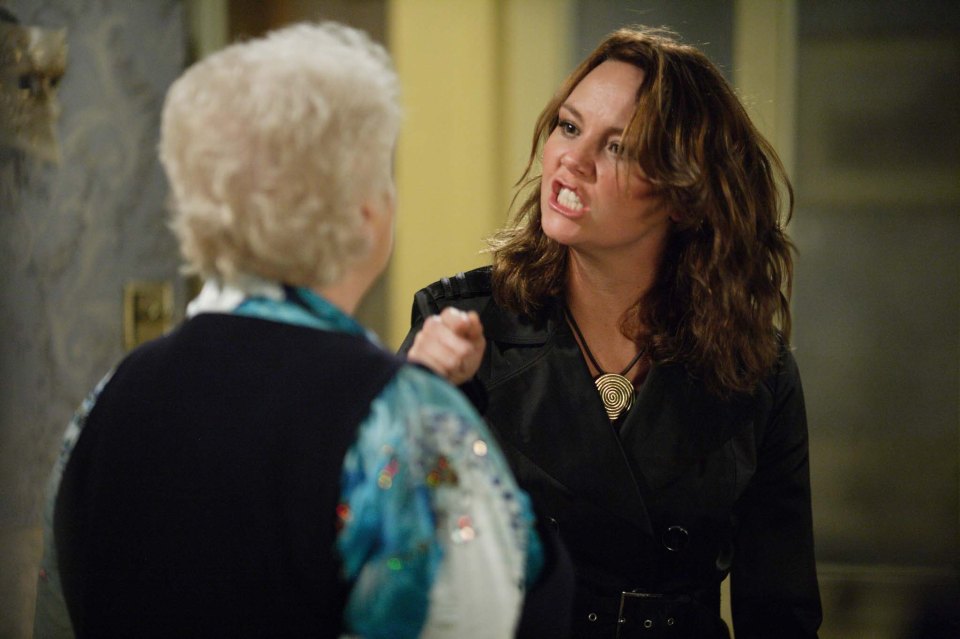 SOAPLAND can be an extremely dangerous place to live.

And with the news Charlie Brooks, 39, is returning to EastEnders as villainous Janine Butcher this year, the residents of Walford better watch out.

But in soap standards how does Janine’s rap sheet weigh up? We rate the biggest sociopaths by body count, attempted murders and their weapon of choice.

MEGA-BITCH Janine schemed to scam car salesman Barry Evans out of his inheritance. They married after he was diagnosed with a life-threatening heart condition but when he made a recovery, she pushed him off a cliff and managed to avoid conviction.

Laura Beale also fell to her death moments after rowing with Janine, but she again narrowly escaped prison thanks to her step-mum Pat providing an alibi in court.

Later she accidentally ran over and killed Ronnie Mitchell’s daughter Danielle Jones, but was cleared of any blame.

When Janine discovered her third husband, Ryan Malloy, was having an affair she poisoned him, but he survived. She then knifed herself in order to frame his lover Stacey Slater.

She fatally stabbed her next hubby, Michael Moon, after he attacked her, and then tried to run over her stepbrother David Wicks over a blackmail plot. But he was only injured.

At trial for Michael’s killing, she was found not guilty.

ON his 16th birthday, Lachlan – played by Thomas Atkinson, 22 – took his grandfather Lawrence hostage and shot him in the stomach. He later killed him and his grandmother Chrissie in a car crash.

His aunt Rebecca was left brain-damaged in the incident and Lachlan later kidnapped her when she remembered he was to blame.

After friend Gerry discovered Lachlan caused the fatal crash, he bludgeoned him to death with a rock.

He also killed conman Paul Tozer and buried him in the forest. Spotted in the act by Sam Dingle, Lachlan attempted to beat him to death.

He also tried to kill Liv Flaherty and her half-brother Robert Sugden by causing a carbon monoxide leak.

As his murderous ways began to unravel, Lachlan kidnapped girlfriend Belle in an attempt to flee.

He was finally caught and placed behind bars.

SHORTLY after moving to Weatherfield in 2013, psychotic builder Pat blackmailed Anna Windass into having sex with him, and later framed her for pushing Seb Franklin off a ladder.

After Michael Rodwell rumbled one of his scams, Pat watched and taunted him as he died from a heart attack. The incident fuelled his bloodlust and he went on to kidnap Andy Carver and hold him hostage for months.

Pat, played by Connor McIntyre, 60, later forced his hostage to shoot Vinny before eventually killing Andy himself and tossing their bodies in the canal.

When Luke Britton came close to exposing his crimes, Pat shot him in the head, inset, and set fire to his car.

Pat kidnapped his grandson Zack on the wedding day of Michelle Connor, who he also attempted to kill before accidentally shooting his daughter Nicola.

Eventually Anna got her revenge by stabbing him.

TEN-YEAR-OLD Bobby killed older sister Lucy when lashing out with a jewellery box in 2014.

In one of the show’s biggest whodunnits, Lucy was discovered dead on Walford Common – with her lover Max Branning looking like the main suspect.

The following year, it was revealed in flashbacks that little Bobby, then played by Eliot Carrington, 18, had whacked Lucy over the head. Dad Ian and stepmum Jane covered up his involvement and hid the terrible truth from even Bobby himself. But on learning what he had done, Bobby hit Jane over the head with a hockey stick. He ran to the Queen Vic where he announced that he had killed Lucy and had just killed Jane too.

Jane survived the attack but feared she may be paralysed.

He was sentenced to three years in a young offenders’ institute for murder and GBH.

Full of remorse, Bobby – now played by Clay Milner Russell, right – returned to the Square in 2019 and converted to Islam.

JUNIOR doctor Lindsey was a morally sound character when she first appeared in 2013. But when she and Cindy Cunningham discovered her sleazy colleague Dr Browning trying to kill Mercedes McQueen, they murdered him and dumped his body in a freezer.

She then tried to kill her hospitalised sister Kim Butterfield by poisoning her IV drip, but stopped at the last minute. After Cindy and Mercedes rumbled her, she attacked them with a copy of the book, Little Women.

She later confessed she tried to kill Esther Bloom and her sister Kath Butterfield as a child.

WHEN women start going missing after arranging internet dates in the Channel 4 soap, nobody suspected sweet widower Silas. But inside he was hiding a hatred for loose women – a crime he deemed punishable by death.

He lured India Longford by posing online as suitor Cameron then murdered her when they met in person. He soon targeted India’s sister, Texas, but held back from killing her, inset.

When he discovered Mercedes McQueen was having an affair with daughter Heidi Costello’s husband, he held her hostage. He later went after Lynsey Nolan but in a case of mistaken identity ended up killing Heidi, which led to his arrest.

He returned to Chester in 2016 when he bumped off Lindsey Roscoe, The Gloved Hand Killer.

He left for dead by Theresa McQueen earlier this year and hasn’t been seen since.

EastEnders’ Ben Mitchell has been caged for manslaughter[/caption]

AFTER getting teased by his friend Jordan, troubled Ben attacked him with a spanner and fractured his skull. He ended up receiving eight months in a juvenile facility.

On his return to the Square, Ben showed he still had a vicious streak by pushing dad Phil’s aunt Glenda down a flight of stairs. Relations with Phil soured and Ben – then played by Joshua Pascoe, 25 – tried to smother him with a pillow. Knowing Heather Trott was on to him, he hit her with a picture frame with such force she smacked her head on a counter and died.

When Shirley Carter found the weapon in a charity shop, Ben was forced to come clean. He was initially charged with murder but caged for manslaughter.

After his release, he tried to blackmail Martin into killing rival Keanu Taylor.

But Ben does have a soft side. Recently he has been planning his wedding to boyfriend, Callum Highway.

DEBBIE Dingle fell for lorry driver Cameron’s charms but he soon showed his evil side by starting a feud with rival haulage firm owner Carl King and cheating on Debbie with Carl’s fiancée Chas.

He ended his bitter dispute with Carl by killing him with a brick – and let Chas believe she was the culprit.

Cameron – played by Dominic Power, 47 – confessed he was the murderer to friend Alex Moss but became uneasy with him knowing the truth. He kidnapped Alex, murdered him and buried his body in the woods.

When Gennie Sharma overheard Cameron confessing, he suffocated her. He was jailed for murder, but soon escaped prison.

While on the run, he held up the Woolpack at gunpoint, shot Alicia Harding and made threats to kill Debbie, Chas and Marlon.

When he tried to drown Debbie in the siege, he accidentally grabbed a light and electrocuted himself.

THE soap’s very first episode in 1985 saw elderly Reg Cox found half-dead in his flat after being beaten by Nasty Nick. He later died.

The villain became addicted to heroin and after trying to go cold turkey he fatally stabbed Queen Vic landlord Eddie Royle in a paranoid haze. He was found not guilty of murder.

After a fight with Mark Fowler in 2000, Nick tampered with his motorbike but his own son Ashley stole the motor and died in a crash.

After his mum Dot banished him, he tried to convince his daughter Dotty to poison her granny so they could inherit her cash, but she refused.

When Nick returned to the soap in 2015, Ronnie Mitchell tried to bribe him to leave the Square for good. In retaliation, he cut the brakes on her wedding car. She was left in a coma.

After convincing Dot to get him some heroin he overdosed and, rather than calling for help, she watched her son die.

WHEN a balcony gave way during a fight with his business partner Duggie Ferguson in 2001, property developer Richard, played by Brian Capron, 74, left him to die.

He went on to marry Gail Platt, but not before killing ex-wife Patricia with a spade and burying her under his new flats.

When he learned his new mother-in-law Audrey is wealthy, he tried to kill her in a house fire, but she was rescued. He then killed Maxine Peacock when she caught him smacking Emily Bishop over the head with a crowbar in an attempt to inherit her house.

Richard framed stepdaughter Sarah’s boyfriend Aidan for the murder but eventually came clean to Gail, who called him “Norman Bates with a briefcase” and left.

He kidnapped Gail and her kids, driving his car into the canal, but they were pulled to safety while his reign of terror died with him.