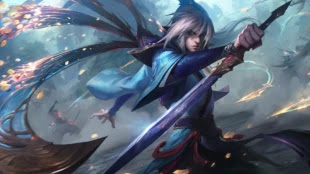 Welcome to the longest-running League of Legends tier list in the world. This tier list is created using statistical analysis coupled with nearly a decade of experience in League of Legends. Specially curated for players that aren't already God's gift to the world, this list is for the humble player looking to climb without massive hours dedicated to mastering champions.

Trusted for our consistent updates and constant feedback, this list is as much yours as it is ours. If you disagree with any champion placements feel free to post in the comment section! We'll gladly either voice our opinion or enter into a discussion on champion placement.

Read on to see the tier list that's granted millions of players around the world massive success in their League of Legends ranked climb. 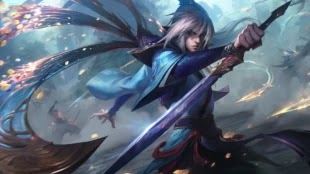 Welcome to the longest-running League of Legends tier list in the world. This tier list is created using statistical analysis coupled with nearly a decade of experience in League of Legends. Specially curated for players that aren't already God's gift to the world, this list is for the humble player looking to climb without massive hours dedicated to mastering champions.

Trusted for our consistent updates and constant feedback, this list is as much yours as it is ours. If you disagree with any champion placements feel free to post in the comment section! We'll gladly either voice our opinion or enter into a discussion on champion placement.

Read on to see the tier list that's granted millions of players around the world massive success in their League of Legends ranked climb.

Finally, some nerfs on Udyr! He's still performing exceedingly well but not quite to the extent that you NEED to permaban him...on the other hand, you SHOULD still permaban him. Be sure to check out the latest ban list for which champions to ban! Meanwhile, Seraphine's significantly nerfed to the point where her short but lively stint in God Tier is now over.
Check out the full tier list below! 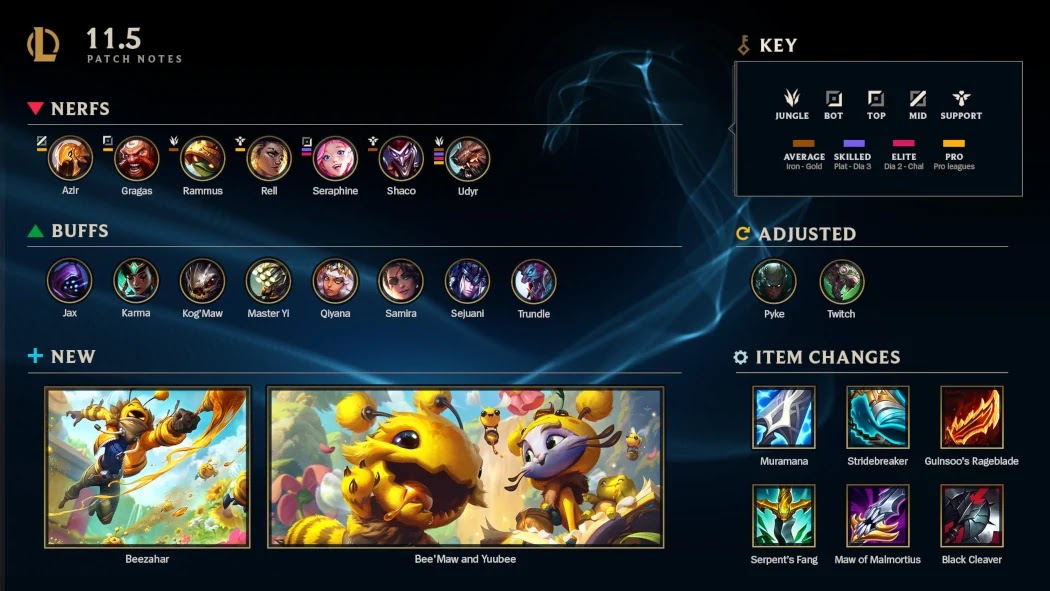 Search for a Champion:

The tier list below lists every viable champion in the game along with a few unorthodox picks that can still perform fairly well. This tier list is meant to organize every viable champion in the game into an order with the average experienced player in mind. Generally speaking, this is somewhere between silver and platinum. This tier list can also be used for higher divisions, but the higher you go, the more specialized at specific champions you become.

When making this tier list we initially considered using tier list descriptions similar to others with S-tier, A-tier etc. However, In the initial build of the tier list way back when we started, it was more popular to use a God Tier designation and then go down from there on the tier list. As a result, we've stuck by this concept through the years. However, since God Tier is supposed to be relatively exclusive on this tier list, we try and limit it to only three or four picks at most. This means that there may be champions that are close to God tier on this tier list, but don't quite make it and are instead at the top of Tier 1.
God Tier: These champions are almost impossible to keep down. If your team doesn't make it a priority to shut down these champions and shut them down hard, even if they lose their lane, lose in CS, and it's their first time playing the champion, they can be a massive nuisance for your team. On the other hand, if they're actually good at the champion...that's when it's time to throw in the towel.

Tier 2: This is the Tier of balanced champions where Riot shoots to place their designs. These champions generally do well in their own right and are very strong picks with a good chance of winning. However, they're not overpowered by any means and do have their weaknesses.

Tier 3: These champions can still do very well, but tend to need a little more snowballing to get rolling. Even if they get an early lead, it's still very possible to turn the tides on them with just a mistake or two. They may also have some weaknesses that can be capitalized on.

Tier 4: These champions are either underpowered or offer less reward than other champions for the same amount of effort. These champions basically start winning from the get-go or get made fun of for the rest of the game. They need gold to do their job correctly, and if they don't get enough of it, they become sandbags for the enemy team to punch. Chances of a comeback with one of these champions feeding on your team is almost none.

In the past, some people complained that this tier list focused too much on win rates and not enough on play rates. However, this tier list takes into account both win rates and play rates before performing analysis on the champion. Just because there's a high correlation on win rates and position on the tier list doesn't indicate that this tier list is solely based on win rates, if anything the champion power level drives the win rates and supports the claim to validity.
League of Legends is an extremely intricate game and this tier list strives to be as accurate as possible to give you the strongest champion picks. We ordered them on the tier list based on what is most likely to give you the highest chance of winning the game. However, the tier list will over time, have a bias towards win rates since this does indicate that the ordering is accurate and not prone to fluctuations in play rate.
With enough playtime, a high win rate on a champion indicates *something* generally goes right, and a low win rate indicates that whatever is happening in games with this champion isn't in their favor.

A low win rate may mean a champion is being played incorrectly and is stronger than his win rate indicates, but a top 25 win rate (with 120 champions) almost always indicates that a champion is at least a good candidate for Tier 1 or high Tier 2 if the sample size is large enough.

This means that champions with high win rates do not mean that they're necessarily GOOD right now, especially if they have a low play rate or tend to get into favorable match-ups. If we feel this is the case, these champions will place differently on this tier list than you'd think.

Similarly, champions with low win rates that are still within the acceptable deviations may end up slightly higher than you'd expect from a champion with mediocre win rates.

If there are champions on this tier list with low overall play rates but good win rates after relatively few games of practice, it may mean that players that pick those champions up just to try them are bringing down the average. If this is the case, we will place them higher on the list.

In Tier 3 of this tier list, we've placed certain champions that are good as a second pick but can get spanked hard if they end up first picking by a variety of meta champions. If you're good at a large variety of champions, picking a champion that counters your lane is a good place to start. If you can get a slight advantage and don't have a clear experience advantage, picking a champion that both places high on this tier list and also counters your enemy lane may give you enough to win a game.

Check out a few of our more popular champion counter guides:

Support in its current state isn't exactly an overpowered role. For the most part, there are no extreme outliers in the support category and the most important characteristics of a support are really to keep your marksman alive and provide some sort of crowd-control where necessary. Alistar's a good jack-of-all-trades that doesn't really pop off but is a perfectly safe pick in any situation.

Azir is an unfortunate casualty of pro play gone right. He's never been very oppressive at the majority of solo queue levels, but he's still getting the nerf bat despite that. Even if you enjoy playing Azir, you'll be feeling the nerfs this time around.

Nerfs on Udry open up a few more junglers into the God Tier status and Hecarim's been poking his head up out of Tier 1 for a while. He exhibits a lot of the traits that makes Udry obnoxious - super speed, high clear, and supreme tankiness. He doesn't have quite the sustained speed that Udyr does but makes up for it by having a much stronger team fight presence.

As noted by some of our readers, while Karthus does have a very oppressive win condition, he's also fairly easy to counter-jungle and avoid early ganks on. Although he's still capable of taking over games very quickly if left to his own devices, someone like Fiddlesticks can do so as well while also providing significantly more outs if he starts falling behind.

Nerfs to Rell were warranted, but dropped an otherwise very interesting support into a manageable Tier 2 and balanced state. Her late game plays continue to be clip-worthy but her  early game is significantly weaker with the armor drop and increase in W cooldowns.

There's not much to say about Seraphine besides the fact that they absolutely hammered her numbers and made her much more teammate reliant. Her ultimate is still great, but a 20 second increase in cooldown makes it come up much less frequently.

That feeling when Shaco support needs a nerf. Sorry Pink Ward.The base numbers on his Jack In the Box were dropped significantly, making him less effective in lane and less likely to blast enemies out of the lane before he runs out of mana.

Thresh is one of those champions that I never feel truly deserves God Tier simply because everyone who plays him has practiced him for so many years already. He's still not really all that beginner-friendly but at this point, I'd say he likely does deserve somewhere in God Tier for similar reasons as Alistar. His crowd-control and damage is high enough that he can kill most champions after missing a bunch of hooks and landing just one. That being said, he does feel "easily" countered by tank champions and also by enchanters playing safe. We'll see if I decide to drop him back down but the numbers do support him a God Tier position.

Nerfs to Udyr's damage and health this patch slowed down his clear speed and overall free effectiveness. That being said, he still performs quite well and is by no means gutted. If you enjoy him feel free to continue playing him when you can...just know that with the highest ban rate in the game it's still unlikely you'll ever get the chance.
Disclaimer:

If you're looking for a more meta based tier list based on popularity, be sure to check out the FOTM list as well!
For a list of champions with the highest *potential* in the game without regard to difficulty or team synergies, jump to the strongest potential champions in each position!
Be sure to visit Optimal Champion Bans by Division too!
Source: nerfplz.com