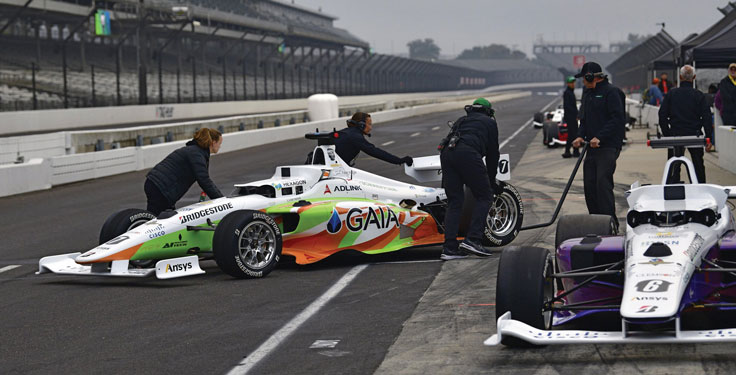 Racing to an autonomous finish

Flipping the traditional scenario, in which car racers risk their lives on a racetrack, the Indy Autonomous Challenge (IAC) aimed to help save lives by improving collision avoidance systems, train future automotive engineers, and make the public more comfortable with autonomous cars. Held Oct. 23 at the Indianapolis Motor Speedway and organized by Energy Systems Network, the race saw 21 universities from nine countries forming nine teams to compete for a $1 million grand prize. Following in the footsteps of the DARPA Grand Challenge, first held in 2004 and later renamed the DARPA Urban Challenge, the IAC was the world’s first high-speed autonomous race. The winning team was TUM Autonomous Motorsport from the Technical University of Munich, Germany.

All competing teams were given the same identical vehicle to work with, a Dallara AV-21, modified to carry no one in the cockpit and equipped with two Hexagon | NovAtel PwrPak7-Ds multi-frequency, multi-constellation GNSS receivers, six cameras (two of which faced backward), three lidar scanners and four radars. Each team had to develop its own autonomy-enabling software stack, including the algorithms and neural networks. All the components, except the computer, had to be commercial-off-the-shelf, available on the market. No sensors could be custom-made.

Since 2001, Dallara has been the sole supplier of the Indy Lights series, a championship to prepare drivers for the NTT IndyCar Series. The Dallara AV-21 is a collaboration between Dallara’s Italian headquarters in Varano Melegari (Parma) and Dallara IndyCar Factory in Speedway, Indiana. The new car offers a modern, stylish appearance and provides the proper training required for drivers as the final step on the ladder to the NTT IndyCar Series.

The process by which the automated vehicle sensors and computers were fused into a singular package and integrated into the AV-21 was led by Clemson University’s International Center for Automotive Research’s Deep Orange 12 (DO12) project. The Deep Orange process mirrors that of automotive original equipment manufacturers (OEMs), and the DO12 project scope allowed for engineering and innovation across multiple subsystems. Student groups within the DO12 team explored solutions within and across multiple subsystems, including:

Hexagon’s Autonomy & Positioning division provided GNSS receivers and subject-matter experts to the Deep Orange 12 team. The team architected the sensor kit for the Dallara reference vehicle, which AutonomousStuff then replicated 10 times. The team did not compete in the IAC to avoid a conflict of interest and allow students to work closely with competitor teams from universities around the world. The PwrPak7-E1 contains a MEMS IMU to deliver Hexagon | NovAtel’s SPAN technology, a deeply coupled GNSS + inertial engine in a single-box solution. Each GNSS receiver has two antennas to provide heading. The Deep Orange 12 team used HxGN SmartNet RTK corrections, which brought the accuracy down to a few centimeters.

Without developing a driverless decision-making algorithm, Clemson students tested the vehicle with the help of a high-precision positioning system. They developed a control algorithm that can track the optimal line around the Indianapolis Motor Speedway such that all vehicle systems could be validated in a simulated racing environment. Data from these tests were shared with the competition teams to aid in their development of driverless algorithms.

Energy Systems Network will host a head-to-head, high-speed autonomous racecar passing competition at the Las Vegas Motor Speedway on Jan. 7, 2022, during the Consumer Electronics Show. Several of the teams that competed in the IAC, including the winner and finalists, will participate. The primary goal is to advance technology to speed commercialization of fully autonomous vehicles and deployments of advanced driver-assistance systems.

Racing to an autonomous finish