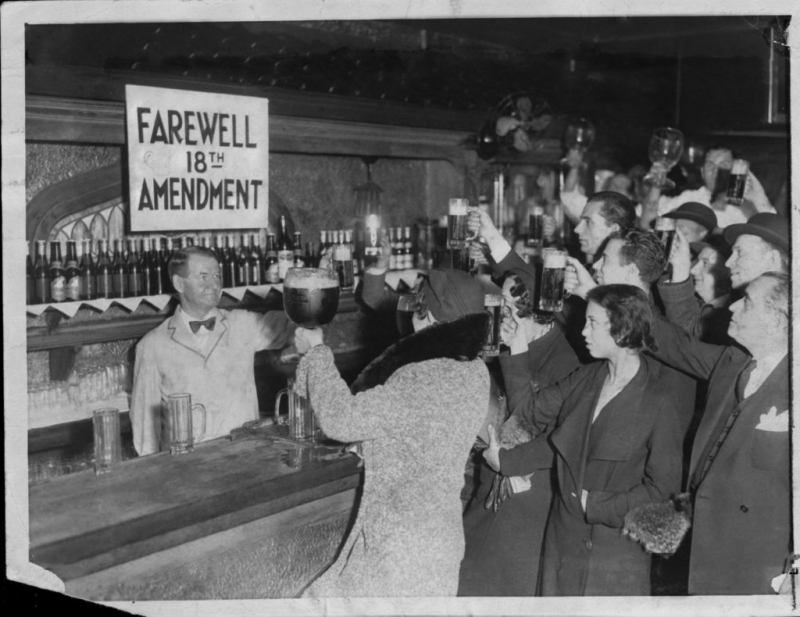 Raise a glass to today's tax-influenced anniversary of Prohibition's repeal

Today's a big day for tax geeks and craft beer aficionados, as well as for lovers of fine (or cheaper; no judging here) wines and liquors.

On Dec. 5, 1933, Prohibition ended with the passage of the 23rd amendment to the U.S. constitution.

Whenever last century's 13-year booze ban is discussed, the focus naturally tends to be on the alcohol component. But taxes also were a big part in both Prohibition's origins and ending.

In that spirit, since it's still a tad early (here at least) to raise a glass, I'm marking (for now) this his 88th anniversary with a Sunday Shout Out this weekend to several articles about how taxes led to the enactment and dissolution of Prohibition.

"Taxes and Prohibition of alcohol were related. But ironically, so were taxes and Repeal," writes Prof. David J. Hanson, Ph.D., who is with the Sociology Department at the State University of New York in Potsdam. Hanson tells us what happened in his post at Alcohol Problems and Solutions that provides, per its headline, an overview of Taxes and Prohibition: Taxes and Repeal (Effects of Taxes & Sources).

Hanson notes that while taxes were involved in instituting a national bar ban, they also were important in ending it. Illegal bootlegging blossomed, with America's Most Wanted criminal at that time, Al Capone, reporting making an untaxed $60 million one year.

Of course, award-winning documentary film maker Ken Burns, along with content creation partner Lynn Novick, cinematically explored Prohibition in a three-part series for PBS. I agree with the PBS promo that says the film is "a compelling saga that goes far beyond the oft-told tales of gangsters, flappers, and speakeasies, to reveal a complicated and divided nation in the throes of momentous transformation."

Part of that change, and an unintended consequence of Prohibition, was to the U.S. tax system. In the words of Burns and Novick:

"One of the most profound effects of Prohibition was on government tax revenues. Before Prohibition, many states relied heavily on excise taxes in liquor sales to fund their budgets. In New York, almost 75% of the state's revenue was derived from liquor taxes. With Prohibition in effect, that revenue was immediately lost. At the national level, Prohibition cost the federal government a total of $11 billion in lost tax revenue, while costing over $300 million to enforce. The most lasting consequence was that many states and the federal government would come to rely on income tax revenue to fund their budgets going forward."

That perspective is reiterated in a recent post by a tax-specific organization, The Tax Foundation. In the post How Taxes Enabled Alcohol Prohibition and Also Led to Its Repeal, the Washington, D.C.-based tax policy organization cites a quote from Burns' co-documentarian Novick: "I had no idea how important liquor was to the federal government."

I beg your momentary indulgence for my own follow-up observation on how important liquor remains to every person who has to deal with the consequences of government actions or inactions. Now back to Prohibition and taxes.

Novick points out in that interview that the taxes "started in the Civil War with the levy on beer and whiskey to help fund the war, and it never really went away. Some 30 percent to 40 percent of the government’s income came from the tax on alcohol. So Prohibitionists realized that the only way they're going to have a ban was through income tax, which was a progressive cause and was really supposed to distribute wealth and to make things equitable during the robber baron era, where the wealth was being accumulated in a very small segment of the population."

The passage of the income tax constitutional amendment in 1913 allowed Uncle Sam the luxury of banning alcohol without reducing tax revenue, notes the Tax Foundation post.

Finally, there is, of course, my post from last year marking the 100th anniversary of the start of Prohibition on Jan. 17, 1920. It examines, as addressed by the PBS documentary makers, how Prohibition made us more reliant on the income tax.

With that, we've come full circle on a unique American era. Enjoy these items on Prohibition's inextricable connection to U.S. taxes.

And as soon as it's 5 o'clock where you are, join me in raising a glass of your favorite, and taxed, adult beverage to commemorate the end of Prohibition.

Raise a glass to today's tax-influenced anniversary of Prohibition's repeal