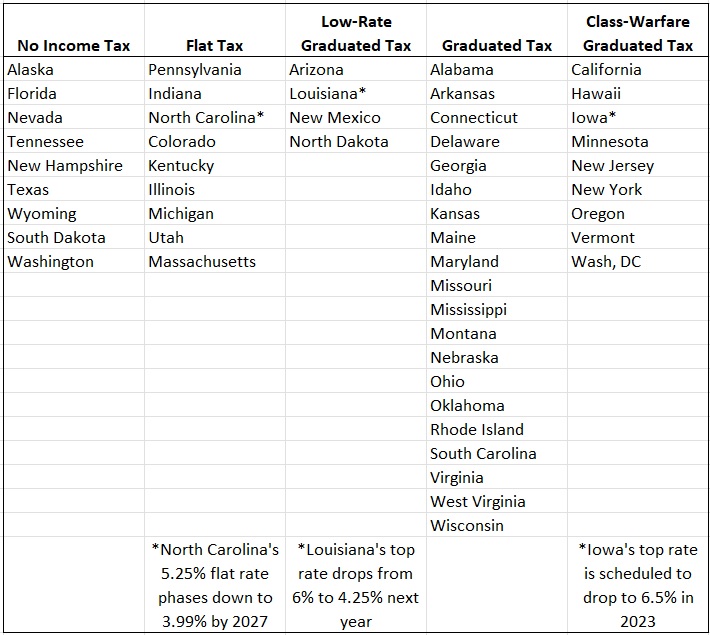 Motivated in part by an excellent graphic that I shared in 2016, I put together a five-column ranking of state personal income tax systems in 2018.

Given some changes that have since occurred, it’s time for a new version. The first two columns are self explanatory and columns 3 and 5 are based on whether the top tax rate on households is less than 5 percent (“Low Rate”) or more than 8 percent (“Class Warfare”).

Column 4, needless to say, is for states where the top tax rate in between 5-8 percent.

The good news is that the above table is better than the one I created in 2018. Thanks to tax competition between states, there have been some improvements in tax policy.

I recently wrote about Louisiana’s shift in the right direction.

Now we have some good news from the Tarheel state. The Wall Street Journal opined today about a new tax reform in North Carolina.

in stages to 3.99% by July 1, 2027. …North Carolina ranks tenth on the Tax Foundation’s 2021 state business tax climate index, and these reforms will make it even more competitive. …North Carolina has an unreserved cash balance of $8.55 billion, and legislators are wisely returning some of it to taxpayers.

What’s especially noteworthy is that North Carolina has been moving in the right direction for almost 10 years.

P.S. Arizona almost moved from column 3 to column 5, but that big decline was averted.

P.P.S. There are efforts in Mississippi and Nebraska to get rid of state income taxes.

P.P.P.S. Kansas tried for a big improvement a few years ago, but ultimately settled for a modest improvement.