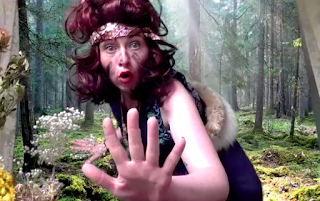 A border security guard prepares the online audience to go on an hour-long journey to Elsewhere where a changeling aided by Birdman Sweeney disrupts the wedding of Anya and Dave and causes all manner of chaos.

Big Telly are no stranger to adapting Irish myths for the stage, but in these times of isolation, Zoe Seaton has plunged into the multi-dimensional wormhole that is Zoom to create Operation Elsewhere,  a piece of experiential theatre that proves that more is possible than you’d expect for theatre in your living room.

With every actor managing their own homebound location, they’re having to manage scene changes (swapping virtual backdrops), costume changes, and props all by themselves. The level of concentration must be exhausting. There’s attention to detail in the direction as props are passed between characters, and Garth McConaghie’s soundtrack neatly links scenes playing out miles apart.

The audience are no passive bystanders or observers. They’re part of the story, instructed with movements, props to find, things to say, and even given lines crucial to the plot. Nicky Harley’s wild-haired Scatha is hard to ignore – you never know when your camera’s view might pop up on everyone’s screen – when she issues commands to do various actions and keeps the show from losing momentum.

As we adapt to living in a less-than-mythical world of coronavirus, this style of experimental theatre is no substitute for the immersive experience that can be achieved in a hushed theatre. Yet it can achieve a level of involvement that is missing in all but the most perambulatory performances in olden so-called normal times. Only a kids show would normally have this level of willing participation, yet singleton adults, couples and whole families could be seen

The mechanics of Zoom have been fully-exploited by the Big Telly team; yet hats off to ‘Zoom magician’ Sinead Owens who never allows the technology to get in the way of the plot in Jane Talbot’s tale, even managing to orchestrate breakout rooms normally reserved for big conference events that allow cast members to pop in and out with urgent messages.

There’s an overwhelming sense that live theatre will do well to hold onto the side of the life-raft (if there is one) during the coming months of distant socialising. Solo performances and edited video work seemed to be the only options for those performers whose artform could adapt to the large or small screen. Yet Big Telly have proven that a cast of seven can create something theatrical that more than achieves its ambition of going live twice a day, telling a good story that both resonates with this island and our current disrupted situation.

Operation Elsewhere continues with 3pm and 7pm performance daily until 4 May. Audience numbers are limited, and with some shows already sold out, zoom along and don’t miss out on a ticket.