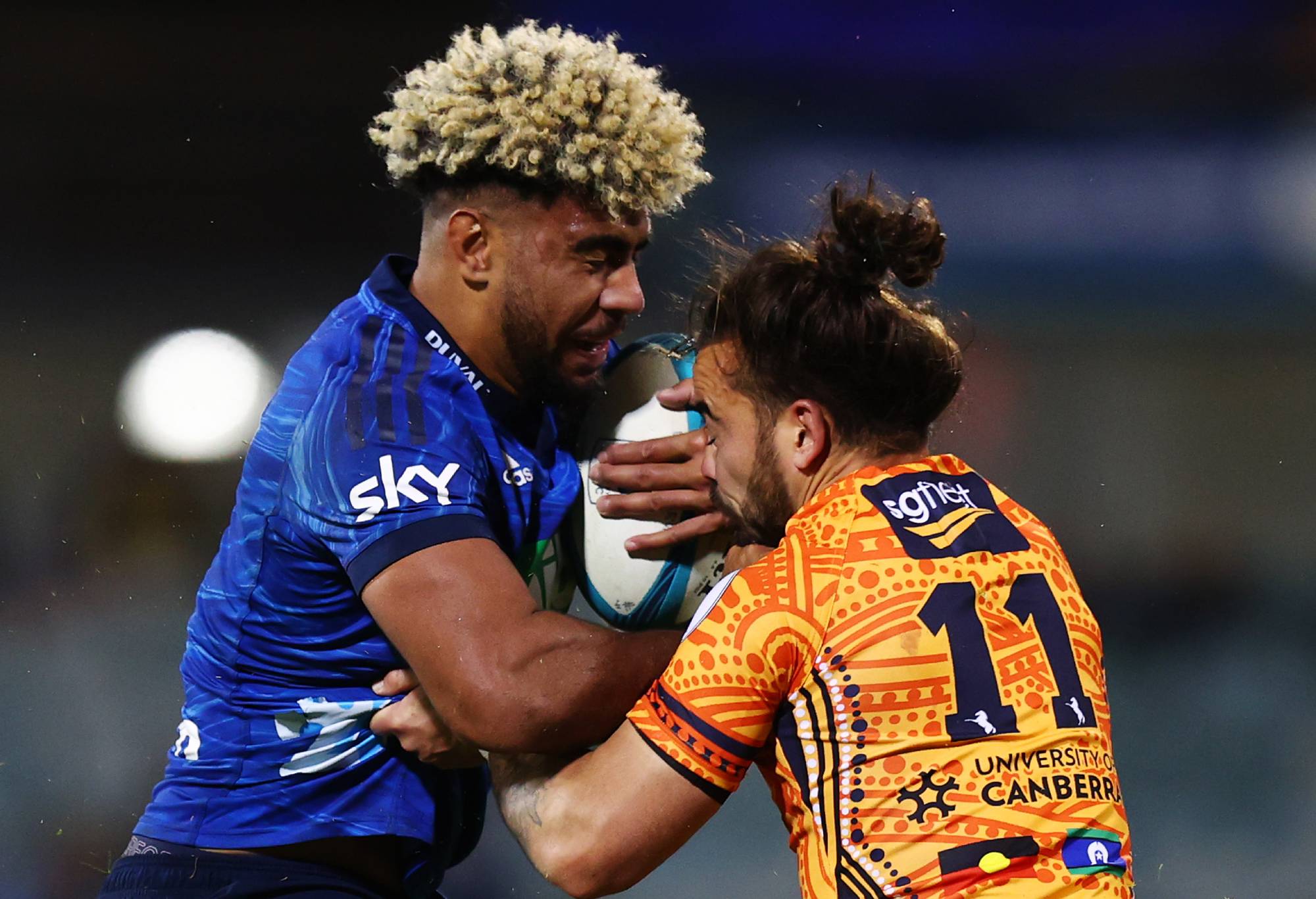 All Blacks star Beauden Barrett kicked a drop goal after the siren to give New Zealand’s top team this season a 21-19 win over Australia’s best, the Brumbies in a Super Rugby thriller in Canberra.

The Brumbies hit the front with two minutes to play, but were unable to close it out, Wallabies lock Darcy Swain with a crucial error that gave the Blues the opportunity, which they grabbed clinically to extend their winning run to 12 straight.

The Brumbies were always under the gun but looked to have taken what would have been one of their best in Super history after two rolling maul tries in the second half stunned the table leaders.

They were battered 16-5 in the penalty count by referee Damon Murphy including a 9-1 advantage in the first period.

“In general our boys showed so much heart tonight,” said Brumbies captain Allan Alaalatoa. “Our backs were against the wall all night. The penalty count was 16-5 and some were out fault but I reckon we’ll get an apology later in the week.

“We played most of the first half in our D zone and defended out hearts out. I don’t think we got the rub of the green but we managed to be ahead in 79 minutes, that’s huge.”

Hoskins Sotutu of the Blues is tackled by Andy Muirhead. (Photo by Mark Nolan/Getty Images)

The Brumbies were off to to a flying start, Swain nabbing a lineout steal before Pete Samu crossed inside three minutes. It was a lead they held until almost two minutes after the half time siren and in between it was virtually one way traffic.

That the Blues, who went to the break leading just 8-7 thanks to Beauden Barrett’s try with the final play of the half, spoke volumes for the defensive grit of the Brumbies.

Weighed down by a 9-1 penalty count, and with just 25 percent of the first half possession, the Brumbies were forced into sustained periods of desperate defending.

Folau Fainga’a and Swain both spent 10 minutes in the sin bin and for a little over a minute the Blues enjoyed a two-man advantage. But the Fainga’a did well to prevent a try before his yellow card and the Blues were held up over the line on three occasions.

Brumbies coach Dan McKellar was clearly livid with the first half performance of referee Damon Murphy, and while his claim that team was smashed 12-1 in penalties was an exaggeration, his assessment of the Brumbies’ bravery was spot on.

At one stage winger Andy Muirhead had to join the Brumbies pack as they attempted to stem the tide, the home crowd booing every time Murphy raised his arm or waved the yellow card.

Nic White put a drop out over the sideline as the pressure intensified, but it wasn’t until the final scrum of the half that the Blues found the necessary cohesion and Barrett took the second pass off the base and dived over for a try.

The halftime break gave the Brumbies a chance to reset and they took it. With 11 gone in the second half Roger Tuivasa-Sheck spilled the ball in midfield and White scooped it up, his little legs road runnering towards the Blues tryline as fast as he could.

RTS managed to bring him down 10 metres out, but did so illegally, wrangling him to the ground with a hand around White’s scruff. In the background chase All Blacks winger Caleb Clarke blew a hamy and had to leave the game

The Brumbies chose to kick for the sideline and soon after they got their famed rolling maul into action. The Blues disintegrated as Fainga’a crossed for his fourth try of the season and the 33rd of his career.

Tuivasa-Sheck, who is making a challenge to play for the All Blacks this season, seized back the ascendency with a crucial line break on 65 minutes and shortly after the Blues were back in front.  Replacement prop Karl Tu’inukuafe surprised the Brumbies by burrowing over the line moments after Swain had pilfered possession under the posts.

A Blues penalty pushed the Blues advantage to six but the Brumbies kept coming and a penalty allowed them to go back to a familiar well.

Tom Banks kicked to the line and from the lineout the Brumbies were ruthless, Billy Pollard crossing for a carbon copy of Faingaa’s try.

Lolesio was nerveless from out near the sideline.

The Brumbies had the ball with 40 seconds to play but Swain lost it. The Blues surged into the Brumbies 22 as the siren sounded. Murphy gave the Blues penalty advantage but they didn’t need it, Barrett sinking his drop goal.

“That was almost Test match intensity the impacts and the see saw nature,” Barrett said. “We knew when you come to Canberra you’re in for a hell of a fight and we got that.”