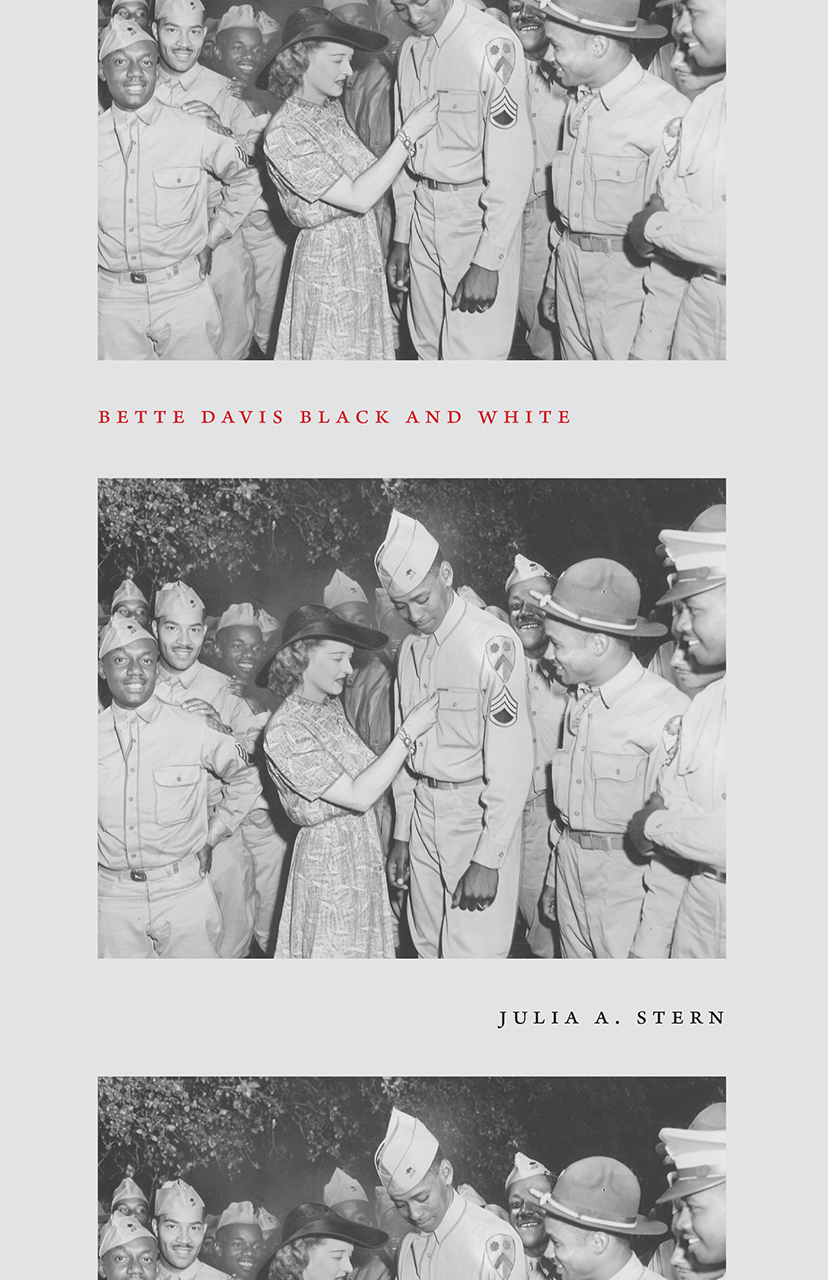 Read an excerpt from “Bette Davis Black and White” by Julia A. Stern

Bette Davis was not only one of Hollywood’s brightest stars, but also one of its most outspoken advocates on matters of race. In Bette Davis Black and White, Julia A. Stern analyzes Davis’s career against the history of American race relations. Stern weaves in memories of her own experiences as a young viewer, coming into racial consciousness watching Davis’s films on television in an all-white suburb of Chicago. We’re pleased to share a brief excerpt from Bette Davis Black and White, available this December.

Personifying vitality, emotional power, intelligence, and independence, Bette Davis was a Hollywood actress like no other. In the 1930s and 1940s, she lived and worked as a feminist, a fact she disavowed and nevertheless embodied decades before the movement’s Second Wave. For nearly forty-five years, I have been a votary of the Fourth Warner Brother, as Davis was called in 1941, in honor of her place atop the box office and her tireless war work. Yet across that half century, save in the African American press, critics, fans, and more recently film scholars have overlooked one of Davis’s most formidable contributions: her on-and off-screen embrace of cross-racial understanding and, in one instance, racist provocation. Bette Davis’s work inspires conversations Americans have not wanted to have about racial fantasy and the dream of reconciliation since well before the birth of talking pictures.

Years of viewing her pictures and working in film archives have led me to consider that Davis’s racial feeling, while almost always egalitarian, was not univocally anti-racist. She was celebrated in the Black press during the 1940s and 1950s for her efforts on behalf of justice for African Americans. In later years, she also made racially insensitive gaffes. Rather than allowing me to defend the proposition that Davis was progressive on issues of civil rights, or to refute that idea, my research has taken me in a broader direction. What can we learn about mid-century American racial attitudes by exploring Davis’s oeuvre? Were her pictures representative of 1930s and 1940s racial feeling in the United States? The movie industry remained plagued by Birth of a Nation caricature. But studios were also shifting into another phase as President Roosevelt attempted to mobilize African Americans to serve in the Second World War. How did Davis’s partnerships with Hollywood’s most distinguished Black actors influence the crafting of characters whose engagement with ethnic others helped distinguish her body of work for its diversity and its depth?

In films made between the mid-1930s and the mid-1960s, Davis starred in a series of roles in which she teamed with African American performers. Such Black actors were featured as enslaved persons, talented-tenth aspirants, and working-class domestics. Many of these movies were rebroadcast on television while I was an early adolescent, ignorant of Black history save vague notions about Harriet Tubman and the Underground Railroad and unaware of racist American theatrical traditions like Blackface minstrelsy. The Little Foxes, Jezebel, In This Our Life, and What Ever Happened to Baby Jane?, the central works I explore in Bette Davis Black and White, left me distressed and filled with questions.

Recalling Hattie McDaniel’s portrait of Mammy in Gone with the Wind (dir. Victor Fleming, 1939), which I had first seen in 1974 at a thirty-fifth-anniversary showing, only amplified my confusion and concern: there seemed to be a gigantic gap between African American leaders I had glimpsed on television and in Lincoln Park and the buffoons—another word I didn’t know then—in the old movies I loved. Through the work of Bette Davis, with whom McDaniel would play in two pictures, giving a devastating performance in In This Our Life, I slowly began to understand American racial injustice as something that extended beyond the purview of the official civil rights movement. The concept I didn’t have for the scope of this problem was “cultural.” Davis’s films eventually became my case studies for thinking about the history of racial representation during Hollywood’s Golden Age, 1929–1962. And the actress’s indignation over inequality and unfairness, on screen and off, eventually began to speak to the intellectual work I had begun to do as a scholar of American literature and culture. The questions that engaged me about racial fantasy and cross-racial exchange were alive and well in Davis’s filmography.

Julia A. Stern is Charles Deering McCormick Professor of Teaching Excellence and professor of English at Northwestern University. She is the author of The Plight of Feeling: Sympathy and Dissent in the Early American Novel and Mary Chesnut’s Civil War Epic, both published by the University of Chicago Press.

The post Read an excerpt from “Bette Davis Black and White” by Julia A. Stern appeared first on The Chicago Blog.

Read an excerpt from “Bette Davis Black and White” by Julia A. Stern