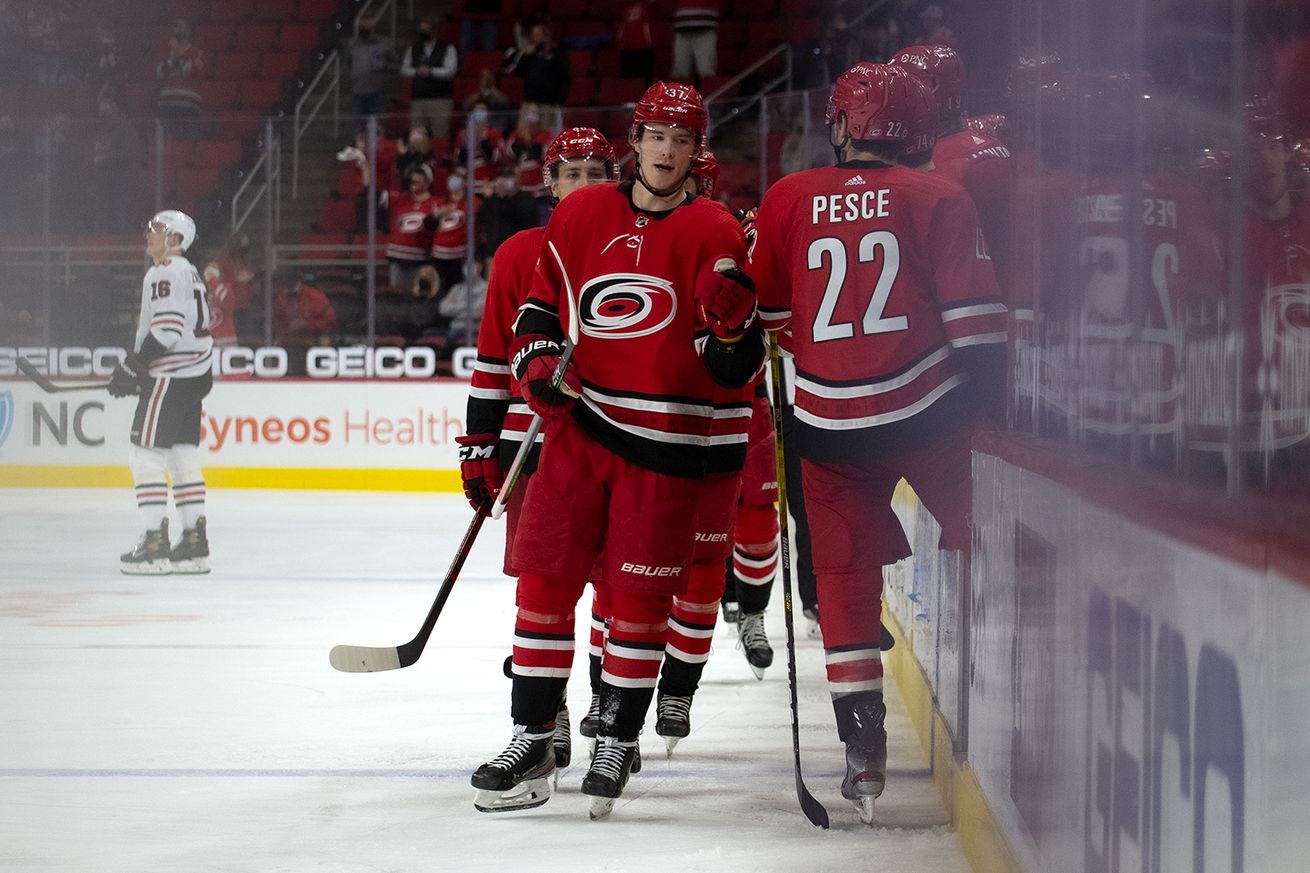 The Carolina Hurricanes overcame an early 2-0 deficit Tuesday night, winning 6-3 thanks to two goals from Andrei Svechnikov and Nino Niederreiter.

The Carolina Hurricanes battled back from an ugly first period and held on late for a 6-3 win over the Chicago Blackhawks in PNC Arena Tuesday night, as Andrei Svechnikov and Nino Niederreiter led the way with two-goal efforts.

The Canes were sloppy early on as Chicago jumped ahead to a 2-0 lead in the opening 20 minutes, with Alex DeBrincat and Mike Hardman getting on the scoresheet. Things turned around for Carolina as the Canes struck back though, with Nino Niederreiter opening the scoring before back-to-back goals from Svechnikov.

Teuvo Teravainen gave the Hurricanes a much-needed insurance goal shortly after Svechnikov’s second, as DeBrincat scored again to cut Carolina’s lead to 4-3. The Canes added empty netters from both Martin Necas and Niederreiter.

Petr Mrazek, in his first game back from injury, got the win in net, settling in after a shaky start to stop 27 of 30 shots faced. Collin Delia was the losing goaltender, making 22 saves on 26 shots faced.

The Canes went to the power play first in the opening period, as Dylan Strome sat for tripping, but things were out of synch for Carolina and it led to a shorthanded opener for Chicago. Sebastian Aho had an uncharacteristic snafu, returning a bad pass from Dougie Hamilton with an even worse one, leading to a breakaway chance for DeBrincat.

DeBrincat put it away, carrying the puck the length of the ice and finishing the shorthanded chance past Mrazek on just the second shot the Canes’ netminder faced.

Chicago made it 2-0 later in the first, as Hardman scored the first goal of his NHL career. Right before the goal Carolina got its best look of the first period on a Hamilton wrister from the slot, but Delia swallowed it up.

On the restart, Chicago got out on a break, leading to a hard shot from MacKenzie Entwistle which rebounded heavily off Mrazek’s pad. Hardman was there to control the rebound and slot it home, scoring his first NHL goal and point on the first NHL assist and point of Entwistle’s career.

The Canes took two penalties late in the first period, successfully killing off the first on Brady Skjei before killing off a pretty weak interference call against Vincent Trocheck between the end of the opening period and beginning of the second.

Carolina got one back early on in the second period, as a failed lacrosse-goal attempt from Morgan Geekie turned into the Canes’ opener from Niederreiter. Geekie went for the move patented in the NHL by Svechnikov, but couldn’t quite control the puck enough to get it fully on his stick.

Much to his credit Geekie adapted well, seeing Niederreiter cutting to the net and making a very good centering pass to the Swiss winger. Niederreiter slotted it in, his 19th goal of the season.

Carolina squandered a golden opportunity later in the second period, failing to score during 1:25 of 5-on-3 hockey. An Ian Mitchell holding and Connor Murphy cross checking gave the Hurricanes the extended two-man advantage, but the Canes just didn’t do much with the puck.

Carolina held possession but didn’t really give Delia any trouble, as Teuvo Teravainen had the only two shots on net during the two-man advantage. In fact, Chicago had another shorthanded breakaway late in the second penalty, but this one was turned away by Mrazek.

Despite that missed opportunity the Canes were able to tie the game up before the end of the middle frame, as Svechnikov ended an eight-game goal drought with a rip from the point that deflected in off a Chicago player.

It didn’t take long in the third period for the Canes to grab their first lead of the game, as Svechnikov scored his second with a great backhand shot on a breakaway. Slavin made a good defensive play to clear the puck from the defensive zone, getting it up to Teravainen who led Svechnikov into space with a pass.

The Russian winger took off from there, powering down the ice before unleashing a filthy backhand into the roof of the net.

That Svechnikov is so hot right now pic.twitter.com/QAo3WKjnzM

Just three minutes later the Hurricanes made it 4-2 with another class goal, as Aho skated in and laid a beautiful pass back to Teravainen in the middle. Teravainen wristed the puck home, scoring his third goal in the last four games.

Chicago didn’t go down without a fight, as DeBrincat tallied his second goal of the game to cut Carolina’s lead to 4-3 on a blistering snipe. Mrazek was screened and never saw the puck, not even moving as DeBrincat’s shot went past him.

The Hurricanes held on after the DeBrincat goal, killing off a penalty late. Necas made it 5-3 in the expiring seconds of that penalty kill, rolling in an empty netter from deep. The Blackhawks elected to pull Delia again, and Niederreiter added his second of the game.

With the regulation win, the Hurricanes clinched home-ice advantage for the first round of the playoffs. The Canes, now at 79 points, are guaranteed to finish ahead of the Florida Panthers, who could get to 79 points but couldn’t pass the Hurricanes in regulation wins. Carolina also now holds a six-point lead over the Tampa Bay Lightning with just one more game played.