Record warmth is forecast across Texas today as we continue to emulate April’s weather versus 15 days before Christmas. Mother Nature will be providing a shock to our systems as a strong cold front blasts into Texas later today and brings temperatures back down for the weekend.

Temperatures this afternoon will climb well into the 80s along the Interstate 35 corridor from Texoma south through Austin and New Braunfels. From San Antonio and down into South Texas, temperatures will top out between 89 and 95 degrees this afternoon. For those wondering, temperatures will be twenty-five to thirty-five degrees above where they should be for mid-December. Simply put – pretend it is April, and you’ll be all set.

Amarillo is expected to top out at 66 degrees this afternoon. Amarillo will be down to 22 degrees tomorrow morning, with a wind chill in the single digits. That’s right! Crashy, the cold front is going to be blasting into Texas tonight. Temperatures behind the front tonight and tomorrow morning will drop from the 60s and 70s down into the 40s rather quickly. Strong north/northwest winds will accompany the cold front.

Temperatures behind the front will struggle to climb out of the upper 40s to upper 50s tomorrow – with temperatures along and south of Interstate 10 dropping through the day as the cold front continues moving south. Temperatures by Sunday morning will be down into the 30s across the northern eighty percent of Texas. Those along the immediate coast and in the Rio Grande Valley will remain comparatively warmer, with temperatures down around 50-53 degrees.

The cooler weather won’t last long. Temperatures will be rebounding up back above average on Sunday and well above average next week. 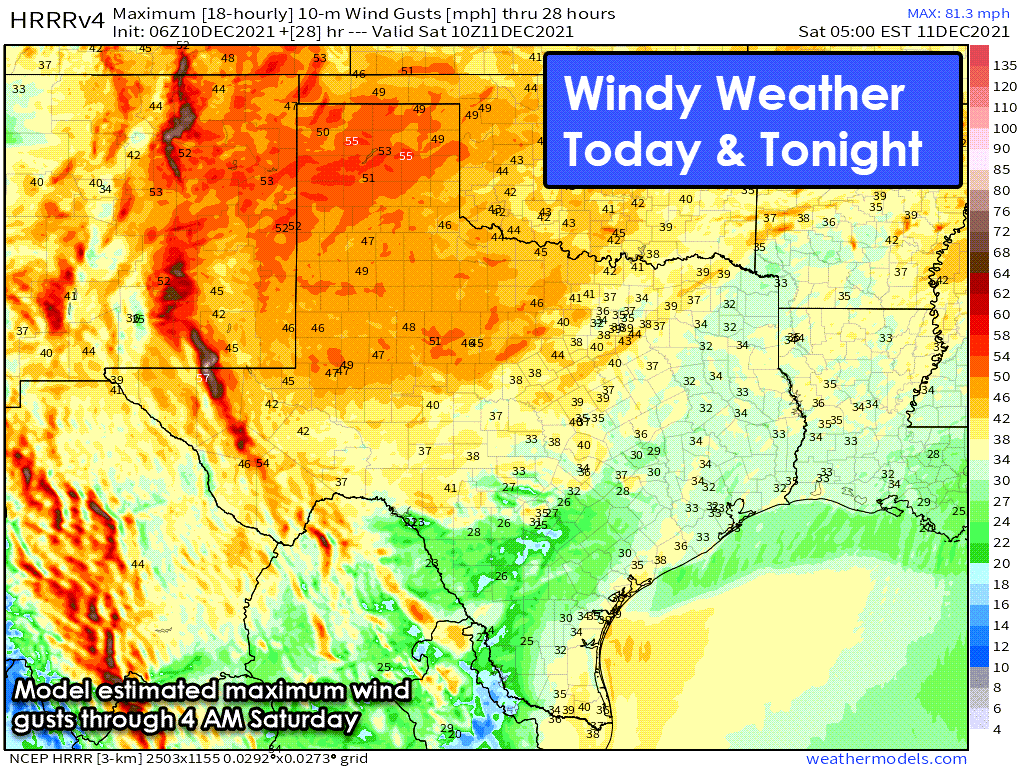 Strong winds this afternoon are likely across the western half of Texas (some wind gusts exceeding 50 MPH). Blowing dust may locally reduce visibility. Winds will temporarily slack off around dinner-time but reemerge out of the northwest as crashy the cold front blasts south into Texas. Strong wind gusts up to 45 MPH are likely behind the cold front tonight and Saturday morning as it moves further south. 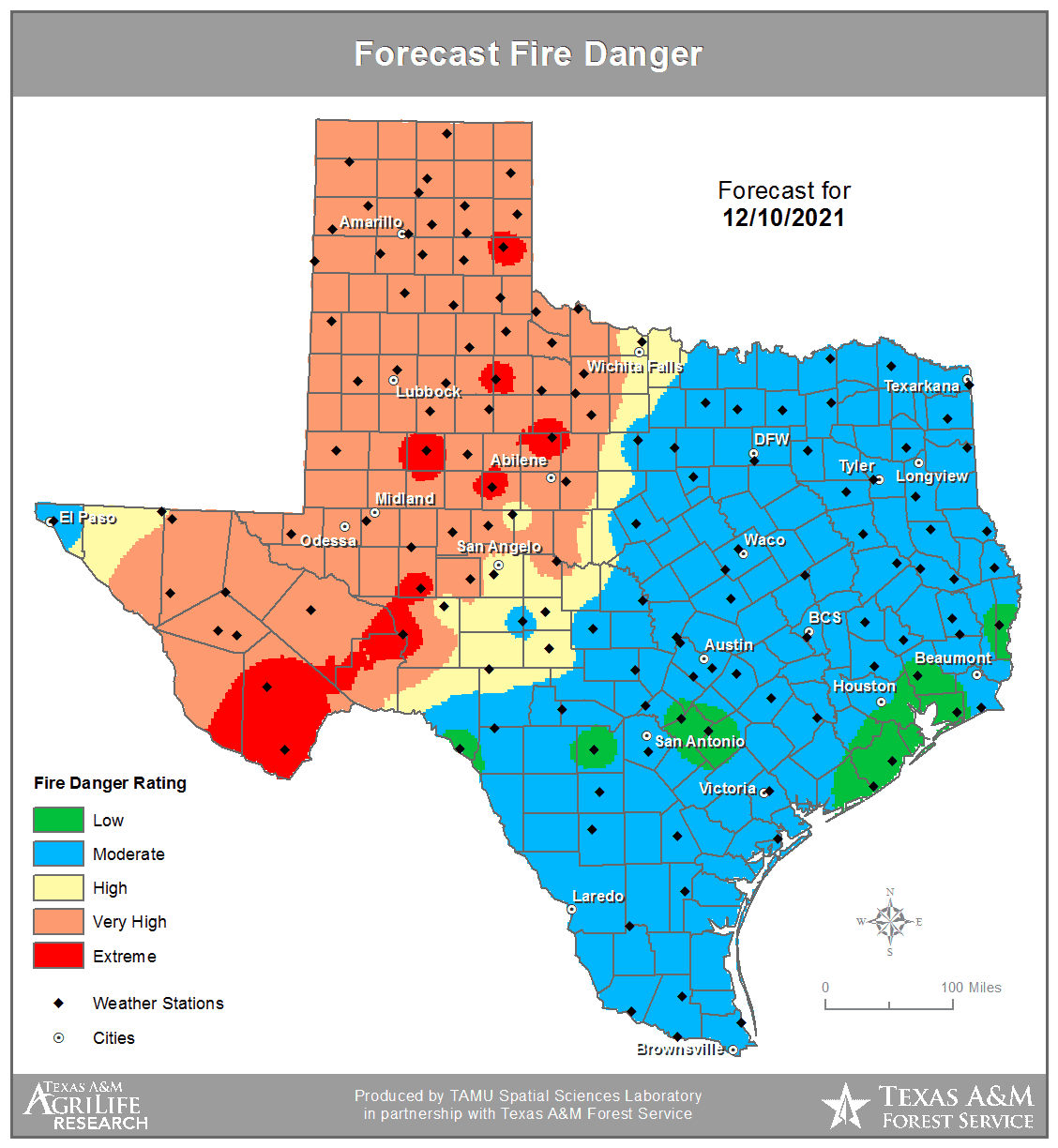 Critical fire weather conditions will occur later this morning through the early evening across the Texas Panhandle, Northwest Texas, West Texas, and Permian Basin. While relatively humidity values may not be extremely low (below 20 percent), very high ERC (Energy Release Values – a way to measure how volatile grasses and other surface fuels are if they ignite) and the strong winds could result in fast-moving, wind-driven wildfires. The Texas Forest Service has pre-positioned aerial assets in Plainview and supplemental engine strike teams via TIFMAS (Texas Intrastate Fire Mutual Aid System) from other parts of Texas to respond to any starts, if necessary. Relative humidity values will start climbing tonight as colder air moves into the region. Still, winds will shift out of the northwest. Firefighters should remain vigilant for the projected wind shift this evening. 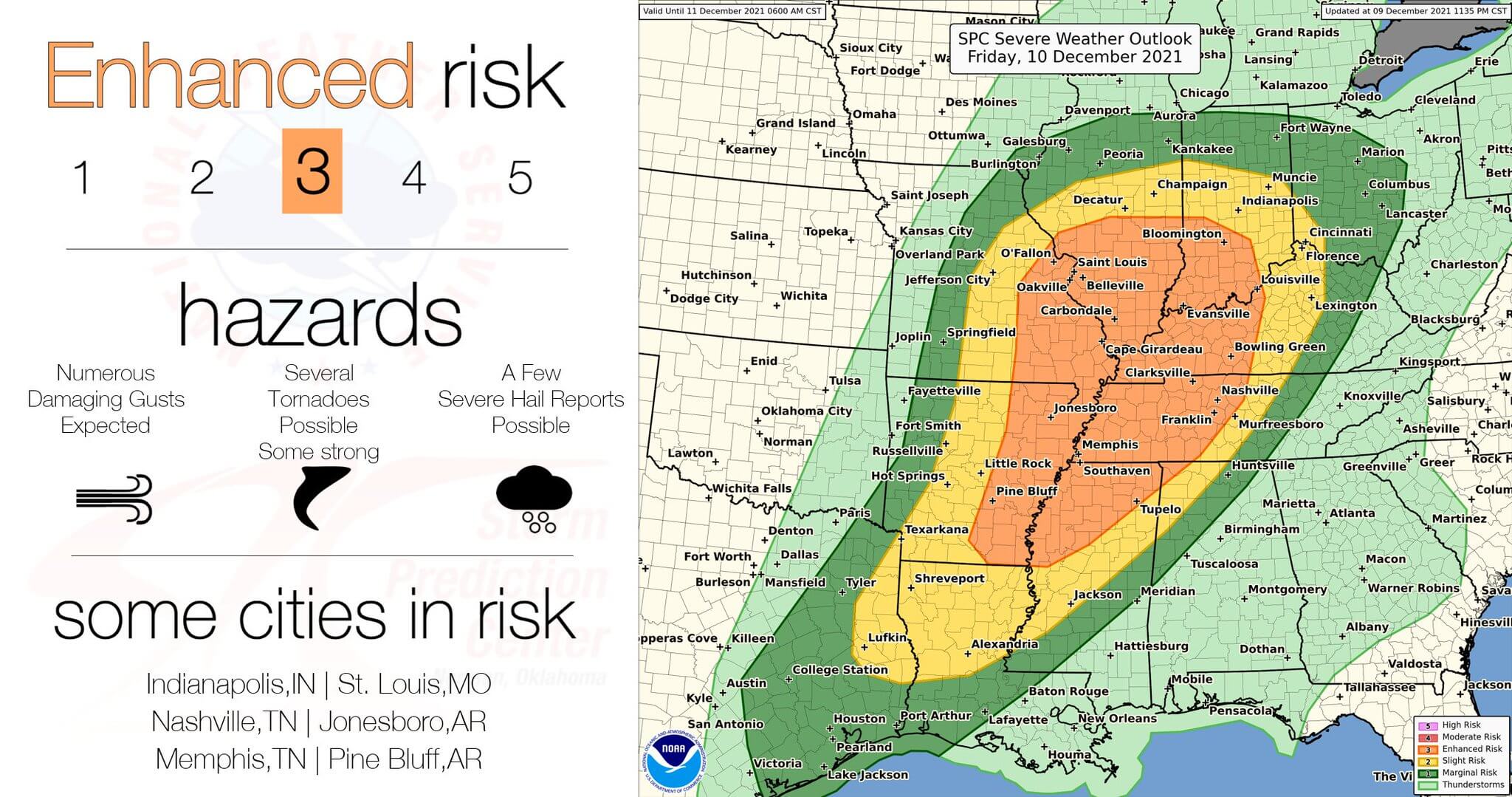 A night-time severe weather event is expected tonight across the Mississippi Valley into the lower Ohio and Tennesee Valley regions. The Storm Prediction Center highlights a level three risk of severe weather (on a five-level scale) across eastern Arkansas, northern Mississippi, western Tennesee, eastern Missouri, western Kentucky, southern Illinois, and southern Indiana. The severe weather threat will likely not begin until around dinner-time and continue well into the overnight hours. Fast-moving storms capable of producing damaging straight-line winds and tornadoes are expected. Mother Nature doesn’t read a calendar, and we certainly are all too familiar with severe weather issues during ‘unexpected’ months. 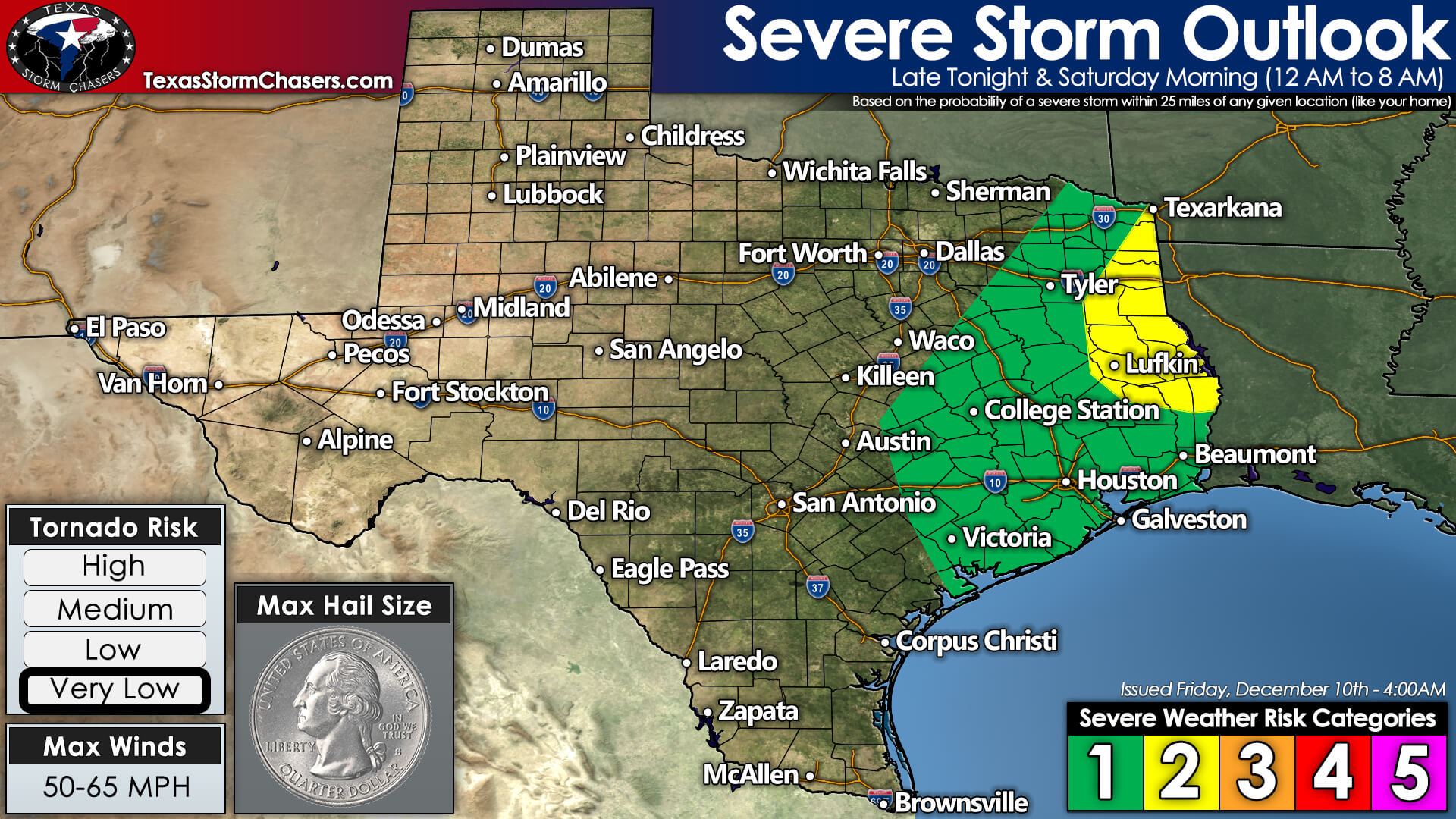 Back in Texas, we’ll be on the tail-end of the severe weather aspect of the system. The Storm Prediction Center has highlighted an isolated severe weather threat late tonight and tomorrow morning across the Brazos Valley, Coastal Plains, Southeast Texas, East Texas, and Northeast Texas. A thin line of showers and thunderstorms will likely develop along a southward-moving cold front around midnight. Severe weather ingredients are much less impressive in Texas compared to farther northeast.

However, we still may have to deal with localized damaging straight-line winds and perhaps a tornado. Gusty northwest winds will occur behind the cold front regardless of any thunderstorm-related impacts. Please see our simulated weather model animation below for a general idea of timing.

Once storms move off the Texas Coast by lunchtime tomorrow, we’ll have falling temperatures and gusty north winds that occur behind the cold front. As stated previously, tomorrow will feel much more like December than today. Yet, the intrusion of cooler air will be brief and limited to the weekend. Next week will feature more warm temperatures.