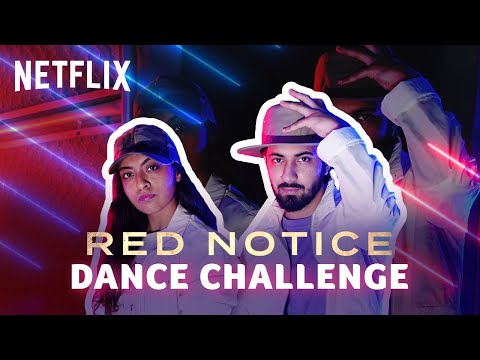 To increase the potential viewership for Red Notice in the country, Netflix India has launched a massive localised marketing campaign. We take a closer look at the OTT marketing strategy at play.

The biggest movie in the history of Netflix, Red Notice, has got massive marketing machinery helping it drive up the charts. The movie has got its fair share of criticism in the reviews, but one cannot deny the powers of Ryan Reynolds, Dwayne Johnson, and Gal Gadot in adding a blend of drama, glamour, and action to the film.

Red Notice’s promotions perfectly sync with Netflix India’s attempts to gather audiences that love thrilling crime tales with a pinch of glamour and dollops of drama. They did it with Sacred Games, Money Heist, and Squid Games too. They are understanding and cultivating a consumer base that would stay hooked for sequels and similar content. For instance, after creating an appetite for Squid Game, Netflix has now dropped another new Korean title, in the dystopian, crime-thriller genre – Hellbound.

Further, Netflix has been generating demand for its high-budget properties through active PR machinery, of late. As seen earlier for Squid Game, the OTT platform generates hype through interviews with Netflix spokespersons and the cast, crew, and creators of the content, usually as they talk about the sheer magnitude of the costs, audience reception, and future sequel plans. While Squid Game did receive raving reviews even in the initial days, it got an international push post, Reed Hastings sporting a Squid Game theme red tracksuit for a conversation with Ted Sarandos, wherein they claimed how the dystopian K-Drama had become the biggest title of the year for Netflix. Similarly, for Red Notice, Dwayne Johnson was seen pegging the movie as the biggest ever on Netflix.

Red Notice’s promotions in India, consist of some desi content in line with Netflix’s global strategy for the movie. Further, there has been incessant advertising on Spotify to a large installation at a Mumbai mall.

To promote Red Notice, a remake of an iconic Bollywood song has been released by Netflix India. Created by Badshah, DIVINE, Jonita, and Mikey McCleary, Bach Ke Rehna was brought to life with a music video and a YouTube Shorts dance challenge. For the dance challenge, steps were specially choreographed by Piyush – Shazia, prompting more dancers to follow in their footsteps.

Dance challenges have become a permanent native of movie marketing plans in India. While they existed since the IPL days of Jumping Japang on television, sporting Farah Khan, one could probably trace its social media popularity back to the ‘Beat pe Booty challenge’ featuring Tiger Shroff. As Instagram pushes Reels further and more aggressively, dance challenges have become an active way of pushing a new song or movie. The popularity of a song or a hook step on Reels results directly in the increase in consumption of that piece of content on other mediums. The latest in this list being Badshah’s Jugnu – the hook step for which has been sort of viral.

Conceptualised by 22feet Tribal Worldwide, the Red Notice Shop campaign invited fans to experience the movie’s concept at Pheonix Palladium, Mumbai. A 3000 sq.ft. retail space was brought to life where everything was free as long as people could steal it. Fans were required to go through a maze of lasers, sensors, secret codes, CCTV cameras and alarms to win (read: steal) goodies, gadgets, merchandise, and exclusive rewards.

To promote the Red Notice Shop, a promo film was released. To support and amplify the campaign, content creator Kumar Varun, stand-up comic Prashasti Singh, and actor Javed Jaffrey, among others, were roped in. They helped create buzz around the experiential installation, inviting people to try their luck. Some of the content thus created worked as tutorials to help people win big.

Also Read: How Netflix India uses reels harping on viewer aspirations of dressing up as characters

Netflix India had also roped in the likes of Kareena Kapoor Khan and Shikhar Dhawan to promote Red Notice. The premise of the content starring them revolves around the core theme of the movie. Two people are all set to come and steal your favourite things — how would you save them?

In continuation with their efforts to promote Red Notice among Indian viewers, Netflix India has released multiple relevant content pieces on YouTube. These include a movie reaction video starring Tanmay Bhatt, Kenny Sebastian, and Rahul Subramanian, a comment reaction video with Dwayne Johnson, Ryan Reynolds, and Gal Gadot, and a Happy Diwali wish by Dwayne Johnson. The essence of these videos remains the same: an attempt to connect using all things quintessentially Indian.

Pre-pandemic, Red Notice might have been the perfect heist movie to watch on the big screens — much like Sooryanshi closer back home. A movie you have got to enjoy at the moment with a big tub of popcorn, without questioning the plot or finding loopholes.

The globe entertainment plane has shifted in the last year, and now such movies have got to find a place for themselves on the small screen. This is, however, aided by the fact that once a piece of content gains cult status on social media, it is almost a matter of prestige to watch it – be it Game Of Thrones back in the day or Money Heist now. A demand-generation mechanism that makes the audience yearn to watch a piece of content amidst the clutter is the need of the hour in this phase and that requires a sustained marketing boost. And, Netflix seems to be ahead of it.