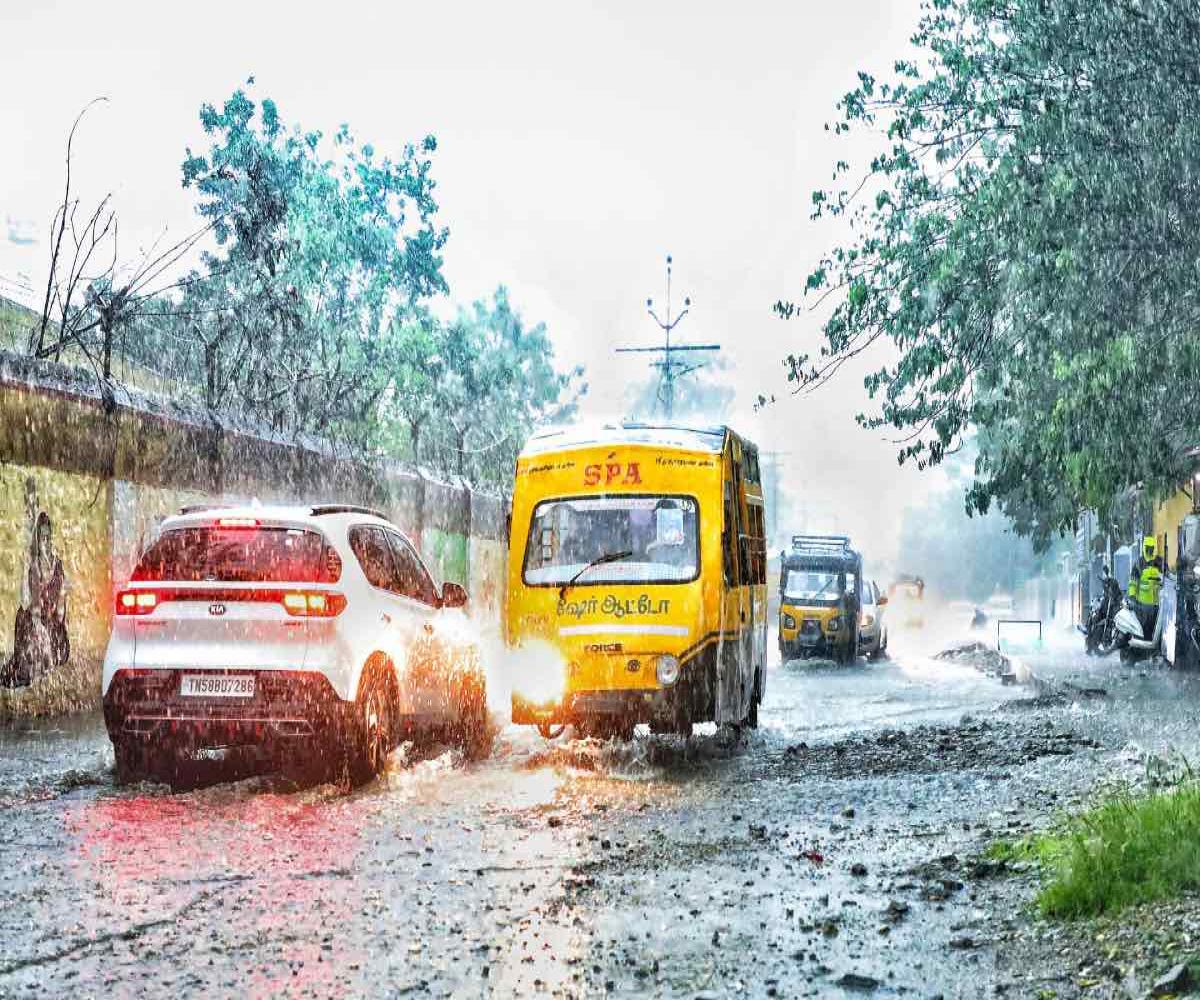 PTI
A red warning has been issued on Friday, November 26, for all coastal districts in Tamil Nadu including Chennai, with the Indian Meteorological Department predicting heavy to very heavy rainfall in 14 districts. A red warning — directing officials to take action — has been issued for Tiruvallur, Chennai, Chengalpattu, Villupuram, Cuddalore, Myladuturai, Karaikal, Nagapattinam, Tiruvarur, Thanjavur, Pudukottai, Ramanathapuram, Thoothukudi, and Tiruvelveli. An orange warning — asking officials to stay alert — is in place for Kanyakumari, Tiruvannamalai, Kallakurichi. A yellow warning — asking authorities to remain updated — has been issued for Dindigul, Theni, Madurai, and Tenkasi.  In its prediction for November 26, Friday, the IMD said that thunderstorms with scattered heavy to isolated very heavy rain are likely to occur in 9 districts. over Tirunelveli, Thoothukudi, Kanyakumari, Ramanathapuram, Cuddalore, Tiruvannamalai, Chengalpattu, Villupuram and Kallakurichi districts of Tamil Nadu.  Thunderstorms with scattered heavy rain are likely to occur over Chennai, Tiruvallur, Kancheepuram, Madurai, Thenkasi, Theni, Dindigul and delta districts of Tamil Nadu, Puducherry and Karaikal area. Thunderstorm with moderate rain is likely to occur at most places over rest Tamil Nadu On November 27, thunderstorms with scattered heavy to isolated very heavy rain are likely to occur over Tirunelveli, Thoothukudi, Thenkasi, Chennai, Tiruvallur, Kancheepuram and Chengalpattu districts of Tamil Nadu, the IMD said. Thunderstorms with scattered heavy rain are likely to occur over Kanyakumari, Ramanathapuram, Tiruchirapalli, Karur, Coimbatore and Nilgiris district of Tamil Nadu. Thunderstorms with moderate rain are likely to occur at most places over the rest of Tamil Nadu, Puducherry and Karaikal area, the IMD added. Heavy rains in Puducherry Heavy rains lashed the union territory of Puducherry overnight and on Friday morning as the administration declared a holiday for educational institutions. A holiday was declared for schools and colleges in Puducherry and Karaikal regions on Friday and Saturday in the wake of incessant rains since Thursday night. Education Minister A Namassivayam, who held discussions with officials of the Department announced the closure of institutions as the Met department forecast rains for the union territory on Friday and Saturday. Several residential areas and hamlets are under the water and schools and colleges will remain closed. 25 cm of rains in Thoothukudi On Thursday, Thoothukudi recorded a whopping 25 cm of rains till evening and heavy rains continued to lash the district on Friday morning. Flights were redirected to the neighbouring Tiruchi airport due to poor visibility and bad weather conditions in Thoothukudi. Train services were hit as tracks were submerged in water.  Rivers and streams are overflowing and heavy rains with lightning and thundering hitting several southern states, including Thoothukudi, Tirunelveli, Dindugal, Ramanathapuram, Pudukottai, and Nagapattinam districts.  Flash floods were reported near the Courtallam waterfalls. Tirunelveli and Tenkasi districts have also received massive rains. Almost all the residential areas in these districts are waterlogged and in several parts of the districts near the river banks houses are damaged as water is gushing into the low-lying areas.
Source: thenewsminute.com