Reflections on the 2010s: Blogging

This post continues some reflections on the decade now ending. Unlike the previous post, Reflections on the 2010s: Political, this one focuses narrowly on this blog itself and on the political blogosphere generally.

Reflections on this blog

Hail To You, published as a labor-of-love by me, E.H. Hail, was born as a political blog in the first year of this decade (late in 2010), and was at its height between 2011 and 2015. If a single year of peak ‘active’ activity must be chosen it is probably 2012. (I would distinguish ‘active’ activity from ‘passive’ activity, with the latter meaning people cruising in from searches, and/or the secondary use of material like charts, graphs, images, or information that was originally published here on other websites, reports, forums, blogs, and social media.)

This blog was successful in its own small way in the 2010s, and earned a place in the network of dissident-right blogs developed in 2013 by a blogger: 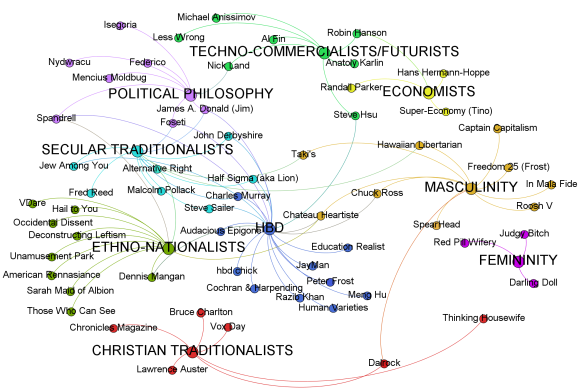 You can find Hail To You around the Ethno-Nationalist node, along with significantly bigger players  VDare, Occidental Dissent, and American Renaissance, as well as M.G. Miles’ Those Who Can See. I have long linked to all of these.

Anatoly Karlin noted in a June 2019 post (“From Blogosphere to Vlogosphere“) that the political-blogging ecosystem changed considerably in the course of the 2010s. It started the decade strong, vigorous, robust, but is ending it substantially weaker, with a great deal of energy shifting onto Twitter, Youtube (pre-purges, anyway), and elsewhere:

Many of the small, old school bloggers just stopped blogging. It was the digital venereal disease that is social media that killed them off more than anything else from around 2010. To have a vigorous blogosphere, you need a tightly connected network of independent bloggers bouncing ideas and arguments off each other, but when 75% of them have migrated to Twitter, there’s no longer sufficient scope in the community to generate the vigorous and counter-argument on which the old blogosphere thrived.

I do not have a better explanation for the decline in blogging other than those offered by Karlin. In my own case, I moved away from blogging due to increased time commitments related to my personal situation, though I certainly never stopped reading and writing in other venues (not much on Twitter). I suspect others have done the same. Life circumstances change, and priorities change, inevitably and always.

A review of some of the big bloggers in this network in the early 2010s and what they are up to as of the end of the 2010s.

The Ethno-Nationalist node. Perhaps the most dangerous node to be around, many of the smaller players linked to this node when the diagram was created in 2013 have since dropped away. Jared Taylor’s American Renaissance, which has an organizational apparatus dating back to the pre-Internet 1990s, is probably the biggest player here. There was a huge political suppression effort directed against AmRen in the late 2010s, including full bans from platforms and payment processors. Spandrell and Occidental Dissent (now run solely by the longtime activist Hunter Wallace) are both still blogging and have a loyal audience. VDare, a relatively well-funded operation and mainstay across the 2000s and 2010s, and surely one of the journalistic-activist vanguards for MAGA, is doing well.

Some other important figures for some reason not included, are Counter Currents (admittedly, never a ‘blog’), Red Ice (more far below), and Paul Kersey. Counter Currents, founded in 2010, which has survived and thrived despite also being subject to serious politicized suppression efforts. Paul Kersey achieved some notoriety for his blog Stuff Black People Don’t Like, which is also now hosted at the Unz Review, a re-grouping point for many. Ron Unz himself deserves great credit for his heroic efforts in the 2010s.

The HBD node. Of those listed there, the popular HBD Chick now tweets but has offered no new, long-form posts in a while. Meng Hu stopped blogging in 2015; Jayman is also now in a state of defacto blogging retirement, but also tweets. Audacious Epigone, who now has three young children, blogs quite actively at the Unz Review and deleted his own Twitter some time back. I have lost track of Razib Khan. The latter and more magnanimous half of the pair Cochran & Harpending is deceased (Henry Harpending, 1944–2016, r.i.p.). Education Realist is still actively blogging with a regular readership perhaps steady in size over the 2010s. Charles Murray is still active, but it’s unclear whether he was ever a blogger at all. I am sure he would disavow the ‘network.’

The king of the HBD bloggers is, and remains, Steve Sailer, one of the most prolific and successful political bloggers of all time, with a core group of effectively daily regulars in the high thousands and semi-regular readers in the tens of thousands alone on his main blog at the Unz Review (moved, June 2014). He has made an average of about 1,500 blog posts a year between 2013 and 2019, and as prolific as that output is, he gets dozens to hundreds of comments on each.

An ironic note here is that the creator of that dissident-right network diagram in 2013, Scharlach, himself hung up his hat on blogging in mid 2015.

A notable ‘survivor’ is John Derbyshire, whose main outlet is VDare (see also archive at the Unz Review). He is notable because he was purged from the National Review in spring 2012, and his blogging, if we can call it that, is more a continuation of his 2000s-era journalism career. I am a Derbyshire fan and find him to be a consistently good commentator, and the 2012 purge was a good thing from one perspective, at least: He was able to write with a freer hand.

A risk to a monetized-video-based movement is a much larger risk of takedown. Many of the bigger players, both text-bloggers and the newer crop of video bloggers, have been taken down, either targeted for site-takedowns, or targeted financially, or otherwise. Most of the rest of us are on the list somewhere.

A major player to mention here is Red Ice (formerly Red Ice Radio), which in the 2010s transitioned from audio to video, partly “vlogging” and partly  running a kind of dissident news channel. Red Ice came under pressure from Big Tech and has now received a full life-ban on Youtube and elsewhere. Run by husband and wife Henrik and Lana, who welcomed two new children into the world in the 2010s, Red Ice regularly racked up hundreds of thousands of views on many of its videos, and their production team broadcast ethno-nationalist events live in the mid-2010s peak.

Twitter as a medium is inherently no good for extended commentary and idea sharing (but excels at one-liners, eliciting snickers, and trolling). Twitter-commentators are also easily subject to purges, having funneled themselves into a medium controlled by one company with self-conscious ties to power.

On the now-well-known strategy used by Google, Facebook, Twitter, and others to suppress search results for targeted users. I have several data-based reasons to believe that this blog has been one of those targeted for partial suppression, and was delisted from search results manually. Some of my data indicates the change came in late August or early Sept. 2017. The algorithms were modified to achieve the desired suppression.  Hail To You‘s partial suppression is a minor thing, but might be instructive. More on this in a future post.

Hail To You has been a successful project in the early 2010s, and was in effect in retirement for several years.

In the intervening years since the peak of activity here and this writing, the general trend has been away from political blogging and of a migration of political energy to other platforms, often with (positive?) larger audiences but (negative) not the best of consequences for any involved. As Anatoly Karlin put it, “those [political bloggers] ones that haven’t died of social media AIDS have instead succumbed to mediocrity amidst the avalanche of YouTube bloggers.”

Hail To You may be fairly placed into the latter part of that formulation, as it sank into inactivity for most of the second half of the decade. I am trying to remember my thought process on why. Did I see blogging as in decline? I don’t think I did. I believe it was much more changing life circumstances and time/energy commitments, and I believe many of the others who stopped blogging would say the same, and indeed this is natural. The difference is that new people did not emerge. New, incoming political-oriented people were all absorbed by the great Twitter-sponge and Youtube.

I agree that Youtube is an inherently unstable platform and that video is probably not an inherently good medium through which to contribute to political dialogue. But there is no question that this migration has occurred. By the latter years of the 2010s, there were quite a few dissident-right-sphere types who were not only entirely on the medium, but who were earning a living from it. I think some of these have done excellent work, even if nearly always inferior to text; even if the market one has to play to is at a much lower level. I have heard one of these people, a major, high-profile in the 2016–2017 period, complain that “the movement is now entirely on Youtube” doing self-absorbed conversations, not much of a political movement.

We do see a strong survival of (written) political blogging is associated with the Unz Review, of which I am a regular reader.

I still believe there is a place for blogging (by which I mean, specifically, publishing in text form) in terms of (1) original research or the addition of genuinely new knowledge to the world (as opposed to commentary), and (2) the firm recording of events that are otherwise much more likely to be much sooner “lost in the Internet quicksands.”

Reflections on the 2010s: Blogging