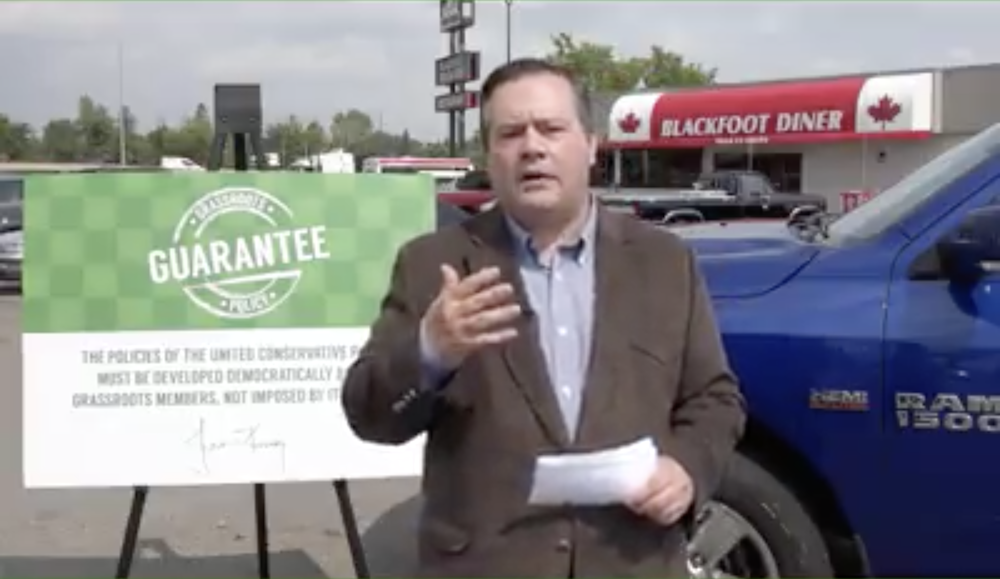 Back in the summer of 2017, when he stood up in the parking lot of the Blackfoot Diner in Calgary and put his name to his “Grassroots Guarantee,” Jason Kenney seemed to have most of the people in Alberta fooled. Those who didn’t believe him, presumably, were committed NDP supporters.

It read: “The policies of the United Conservative Party must be developed democratically by its grassroots members. Not imposed by its Leader.”

The policy set out on the now-defunct GrassrootsGuarantee.ca website also promised regional and constituency policy workshops “inviting all members to participate in open, informed debate to generate ideas for local policy resolutions,” and votes on grassroots resolutions.

“We must develop policy in the same way that we created the united party, democratically, with the grassroots members in charge,” Mr. Kenney told reporters who showed up for the stunt, typical of events organized by the Canadian Taxpayers Federation back in the days Mr. Kenney ran that organization.

The conservative movement had fallen apart in the years that led up to the election of Rachel Notley’s NDP in 2015, he told the assembled media, “because of an arrogant, top-down style of leadership.”

“We had leaders telling people what to think, rather than listening to them in humility,” Mr. Kenney said. “We must not repeat the mistake of that arrogance, we must have an approach of humility and servant leadership that empowers the grassroots members to decide the policy direction of this new party.”

“I don’t think it’s my role as a leader to tell the membership what to think,” he summed up. “It’s time for less ‘I’ and ‘me’ and more ‘us’ and ‘we’ as we build this party together.”

Looking back from the perspective of 2021 at that old-timey event, it seems steeped in irony. Can it only have been four years? It feels like an epoch!

Mr. Kenney defeated Brian Jean, his main rival, and Doug Schweitzer to win the UCP’s leadership three months later, on Oct. 28, 2017. Jeff Callaway, the now-notorious “Kamikaze Candidate,” had dropped out of the race on Oct. 4.

It didn’t take long for Mr. Kenney to grow forgetful about his promise. Arguably, he revealed in May 2018 it wasn’t worth the Coroplast it was written on, the instant party members passed a potentially embarrassing policy motion on Gay-Straight Alliances at a UCP policy conference in Red Deer.

“I’ve always been clear that as leader I will consult broadly with Albertans outside of our party to develop a common-sense, mainstream platform to reignite our economy,” Mr. Kenney said piously at the time.

If talk of common-sense, mainstream policies doesn’t sound like the Jason Kenney we’ve come to know since then, remember that then-premier Rachel Notley had not yet called an election.

Mr. Kenney certainly fooled a majority of voters on April 16, 2019, when the UCP handily defeated the NDP in the general election and he found his hand firmly on the province’s tiller.

The rest, as they say, is history. More and more Albertans kept discovering that Mr. Kenney might be a pretty good campaigner, but he couldn’t run a government nearly as well as advertised.

In fact, since then, it’s pretty well been a gong show every day right up to the present moment, with the party split once again along social conservative/business conservative, rural/urban lines not unlike Alberta conservatism’s predicament in 2015.

According to several pollsters, Mr. Kenney’s approval rates now languish in the sub-basement.

A significant percentage of UCP members and the party’s caucus in the Legislature want him gone.

Eighteen or more constituency associations have voted for an accelerated leadership review that could cost him his job.

His old rival, Brian Jean, is seeking the UCP nomination in the Fort McMurray-Lac La Biche by-election and says he wants to knock off Mr. Kenney and take over as leader.

And now plans are afoot by Mr. Kenney and his supporters to change the rules of next weekend’s UCP annual general meeting to prevent a vote on an early leadership review.

The rules have been published and, lo and behold, they include this: “No resolutions other than the Special Resolutions and Resolutions approved by the Board will be considered, with the exception of those proposed by the leader.” (Emphasis added.)

Blaise Boehmer, of all people, has posted a critical tweet about this.

Until recently, Mr. Boehmer was a key senior policy advisor to the Kenney Government known for aggressively promoting its agenda on social media.

On Nov. 1, though, he was named director, corporate communications and public affairs, by National Public Relations, which bills itself Canada’s leading public relations firm.

It contains a link to Mr. Braid’s column.

This is just one person, but as a symbol of the unhappiness in the UCP, it has a certain impact.

We seem to have reached the point where Mr. Kenney is fooling almost no one.

Listening to party members with humility? Forget about that.

Mr. Kenney still has supporters, of course, but they are people who have hitched their wagons to his star and not found a way to unhitch them.

Surely no one is left now who doesn’t understand the Grassroots Guarantee guarantees nothing!

One presumes that large numbers of Albertans, including some UCP supporters, made it clear to Mr. Kenney they had no problems at all with that kind of child care, as long as it saves them money.

It would seem that the cause of Mr. Kenney’s petulant objections was not high principle, but the federal election campaign, during which the federal chapter of the premier’s party was pushing the kind of boutique tax break that worked once upon a time for the government of Stephen Harper.

The details will be announced this morning at a news conference at the YMCA Shirley Stollery Child Care near downtown Edmonton. It will be attended by Mr. Kenney and Prime Minister Justin Trudeau and other federal and provincial worthies, including Deputy PM Chrystia Freeland and Alberta Children’s Services Minister Rebecca Schulz.