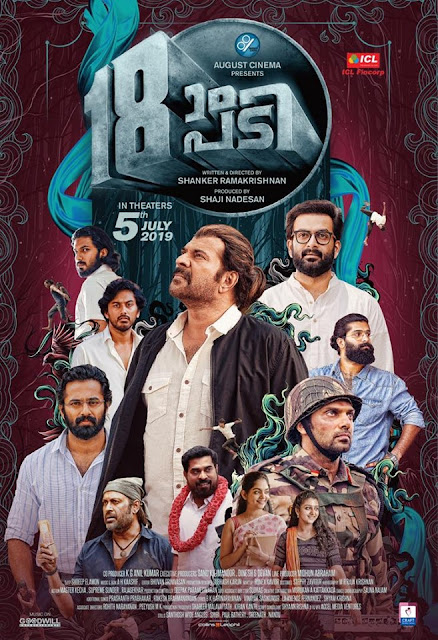 When Aashiq Abu packed Virus to the brim with stars, each one’s presence served to underline the significance of every single player, big or seemingly small, in Kerala’s battle against Nipah. Shanker Ramakrishnan’s Pathinettam Padi (18 Steps), also written as 18am Padi, is just a case study in showing off.
An array of newcomers are the primary players in this bloated, pretentious melodrama about drugs and gangs in Kerala schools. If the focus had remained on them, who knows, the effect may have been different. Instead the film is stuffed with respected character artistes in supporting parts, cameos by stars Arya and Unni Mukundan, and extended cameos by megastars Mammootty and Prithviraj Sukumaran. Arya and Mukundan do nothing for Pathinettam Padithough their scenes, like many others in the film, do scream out “look, we got him... and him... and her... and her also... and hey, him too.”
The action in Pathinettam Padi is set in two rival Thiruvananthapuram schools, one a private institution populated by upper-class kids, the other government-run and filled with students from less privileged families. The rich kids take drugs and make out with each other. The less moneyed set are bitter and angry. The class stereotyping apart, while class tensions among youth are a reality, the scale of violence among this lot – bus burning,constant bloodletting, even murder – defies believability.
That said, the early portions of the film do yield some slick action choreography in well-shot, well-edited fight sequences. One particular battle had me chewing my nails off in fright as a group of boys battled each other on a bus.
Of course it is about boys, boys and more boys. Women and girls serve no purpose in these schools other than to be pretty props in the background for men to fall in love with, assault or protect. Taking the cake in this respect is the under-utilisation of Ahaana Krishna who plays a teacher called Annie at the elite school. Just days after watching her Luca, which is currently running in theatres, it feels almost insulting to the gifted, charismatic Ms Krishna that her only role in Pathinettam Padi is to look glamorous and make a male teacher called Joy (Chandunath) look even better by falling in love with him.
By the time she enters the picture, in any case it is clear that this film is preoccupied with style over substance, and not one of its multiple characters is written in a way that makes them emotionally relatable – not even the men who get tons of screen time, reams of dialogues and are the primary movers and shakers of the plot. Joy, for instance, is supposed to be the cool dude of the faculty, and to drive that point home he is shown listening to Western music, has earphones plugged in while walking down the school’s corridor, has long hair, is a buddy to his students and acts in an English play, meaning, he is conceptualised as a certain stereotypical ‘type’, plus he delivers cool-dude-ish lines and has a cool-dude-ish swagger, but who this man is as a person never quite comes across.
In the foreground of the crowded storyline are Ashwin (played by Ashwin Gopinath) from the private school and Ayyappan (Akshay Radhakrishnan) from the government school. These artistes, and in fact all their young co-stars playing students, clearly have potential, but in the absence of good writing to back them, all I can remember of Ashwin and Ayyappan now are their poses and fisticuffs. And oh ya, Ashwin has a journalist sister played by National Award winning actor Priyamani whose few-seconds-long appearance becomes another instance of a talented star being wasted in this distended film.
Pathinettam Padi’s over-stretched timeline accommodates the older Ashwin (Prithviraj) as a narrator, the older Ayyappan(Arya) as an Army major dispensing intellectual sounding lines in the thick of action in a border posting, and Joy’s elder brother John (Mammootty) who gets to look imperious while making a late entry into the boys’ lives and steering them towards a whole new path. There are some potentially interesting bits and pieces in the students’ interactions with John, but they are lost to the excessive length of this portion and its complete shift in focus from the youngsters to the megastar.
Besides, everything in this film is drowned out by its overall pomposity, drummed-up music, slow motion shots, attention-seeking camerawork and multiplicity of poorly fleshed out characters.
Shanker Ramakrishnan, who earlier wrote Urumi, has written Pathinettam Padi, which also marks his debut as a feature director. The film is all sound and fury, no heart or soul. Pathinettam Padi is loud both in terms of storytelling style and literally, in terms of volume. Watching it was an exhausting experience.
For a film that spends so much on its art design, camerawork and stunts, Pathinettam Padi stints to amusing effect on makeup. In a scene in which Ahaana Krishna’s character has aged, she is given salt and pepper hair and spectacles, but her skin is as smooth as a baby in a Johnson & Johnson ad.
Pathinettam Padi’s intellectual pretensions begin with its name, an allusion to the age of adulthood and the 18 steps devotees climb in their final approach to the sanctum sanctorum of the Ayyappa temple in Sabarimala. The lofty sacred reference brings to mind the crucial aadyathe padi (first step) of filmmaking that this team skipped: write a script that is worth making into a film.
Rating (out of five stars): *
This review has also been published on Firstpost:
https://www.firstpost.com/entertainment/pathinettam-padi-movie-review-loud-crowded-high-school-drama-leans-too-heavily-on-mammootty-prithviraj-cameos-6946401.html
Poster courtesy:
https://www.facebook.com/PrithvirajSukumaran/