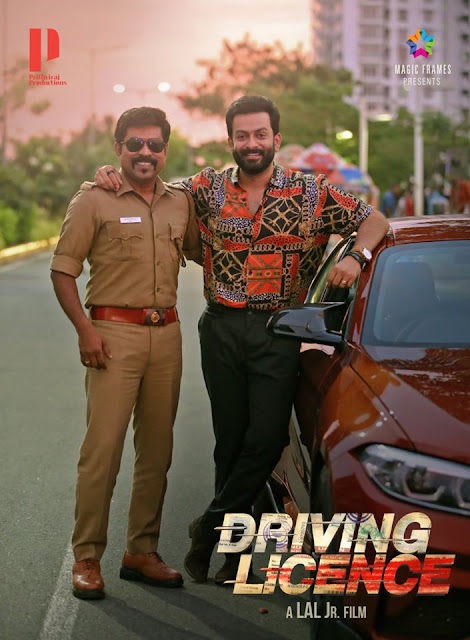 A major star needs a driving licence. The motor vehicle inspector in charge of his application is his fan. A misunderstanding caused by a third party’s actions leads to a blazing showdown between them. Could this be the starting point of great cinema? Yes, if writer Sachy and director Lal Jr are involved. In their hands, what follows is a captivating, unexpectedly insightful examination of human nature, as a game of pride and pettiness, fandom and fury leads to a high-profile war over a tiny issue.
Prithviraj Sukumaran plays the actor Hareendran, and Suraj Venjaramoodu is the MVI, Kuruvilla J. Both are in top form in Driving Licence, a suspense-filled, fast-paced ride that belies and surpasses all expectations raised by the trailer and the film’s opening minutes. At first it appears that this will be just a David-vs-Goliath battle. Then it seems that it will be a story of how even the smallest cog in a wheel can cause massive disruptions. Then it looks like it will be about media sensationalism or Mollywood politics. Then it heads in the direction of how the bureaucracy misuses its powers. Each time you think you have cracked Driving Licence,  it takes a surprising turn. This screenplay is one of the cleverest pieces of writing to emerge from Malayalam cinema in what is already a great year for Mollywood.
Lal Jr, whose calling cards as a director so far have been Honey Bee and Honey Bee 2: Celebrations, whips up the excitement levels in his latest venture with the aid of editor Ratheesh Raj’s smooth transitions and swift cuts. What elevates Driving Licence above the average thriller and makes it almost unslottable genre-wise though is its thoughtfulness. Intelligent writing, deft editing and nuanced acting join forces to ensure that neither Hareendran nor Kuruvilla is villainised or heroised at any point. What we get instead is a plausible series of circumstances aptly illustrating how momentary bursts of temper (from both gentlemen), arrogance (Hareendran’s) and small-mindedness (Kuruvilla’s) could cause otherwise manageable incidents to spiral out of control. The film is not perfect – we are never quite given to understand why Hareendran trusts his childhood friend, the politician Johnny Peringodan played by Saiju Kurup, when it is so clear that the man is untrustworthy, and Kuruvilla’s wife (Mia George) comes across as a caricature – but it is gripping all the same.

Though Driving Licence – perhaps intentionally – gives off a vibe of being casual fun, it is quite the opposite. Don’t get me wrong. It is lots of fun. However, it is anything but casual. In fact, it is brave in the way it highlights the control big stars in Kerala have over their fans associations (this is true of fans groups across southern India’s film industries) at a time when the aggression, criminality and toxic masculinity of such associations has come under scrutiny after the actor assault case of 2017, the formation of the Women In Cinema Collective and the attack on Parvathy for her outspokenness.
That said, the handling of Mollywood politics is less layered than the rest of the film. The misogynistic AMMA (the Association of Malayalam Movie Artistes) which has behaved shamefully in the aftermath of the 2017 attack, has been given kid-glove treatment here, and painted simply as a bunch of supportive men who back a fellow artiste when he is treated unfairly. This, and the speech given by Hareendran in the end when he holds back from lambasting his fans shortly after they displayed horrifying mob behaviour, are the places where Driving Licence chooses to play it safe. Hareendran the superstar is very likely to be cautious in comments about his fans, but this is Team Driving Licence itself avoiding antagonising the public.
These, no doubt, are conscious decisions. What appears unconscious and is therefore far more disturbing is the way Kuruvilla’s physical roughness towards his wife and the manner in which he trivialises her are portrayed with a such-is-life tone rather than a critical eye.
Hopefully, Lal Jr and Sachy will rise above their social conditioning next time and will also show even more courage than they have shown here.
The two leading men in Driving Licence are surrounded by a well-chosen supporting cast, including Deepti Sati who lends quiet dignity to the role of Hareendran’s wife despite her limited presence in the proceedings, Suresh Krishna who is hilarious as a mediocre actor and Hareendran’s jealous rival, and Adhish Praveen as Kuruvilla’s son. There is a scene in which the boy realises that his Dad is lying to avoid telling his wife about a humiliating experience – the camera rests very briefly on him, but those moments are enough for this remarkable youngster to convey a child’s internal conflict.
Venjaramoodu has already rocked the big screen with his performance as a lonely, ill-tempered old man in Android Kunjappan Version 5.25 earlier this year. In some ways Kuruvilla is a more challenging role because it gives him no crutches to lean on, like the heavy makeup of Android or the massive age difference between him and his character. In this film as in that one, he has to earn sympathy for his character despite his misbehaviour with another character who is hard to dislike. Venjaramoodu of course pulls it off.
2019 has been a mixed bag for Prithviraj. While Brothers Day was disgraceful and his directorial debut Luciferwas disappointing, both Nine and Driving Licence are reminders of what a fine actor he is. That he is also heartachingly handsome does not hurt, of course. In his turn as the brusque superstar who adores his wife, Prithviraj owns every frame in which he appears. He is one among the multiple reasons why Driving Licence, despite its share of potholes, remains a thoroughly entertaining experience.
Rating (out of 5 stars): 3.5
This review has also been published on Firstpost:
https://www.firstpost.com/entertainment/driving-licence-movie-review-prithviraj-is-terrific-in-a-captivating-drama-on-pride-and-pettiness-fandom-and-fury-7814391.html
Visuals courtesy: https://www.facebook.com/PrithvirajSukumaran/