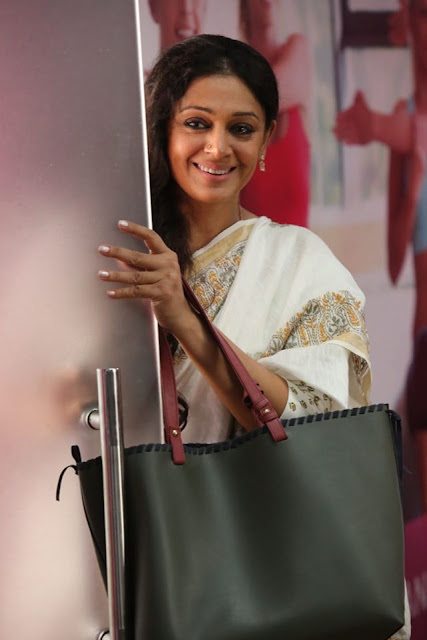 Gawd, she is gorgeous!
In a decade that has been crying out for more films with Shobana, debutant director Anoop Sathyan – son of the legendary Sathyan Anthikad – has pulled off a coup. First, he convinced the stunning actor-dancer to star in Varane Avashyamundu (Groom Wanted). Then, in an era where major male stars in their 50s and 60s insist on playing comparative youngsters romancing women played by female actors of their children’s generation, he cast veteran stalwart Suresh Gopi in the role of her beau. As if that were not impressive enough, Anoop has Dulquer Salmaan – one of contemporary Mollywood’s most powerful young stars, debuting as a producer here – happily hanging out in the background playing one of several charming characters in this ensemble film, instead of using his clout to increase his screen time.
A hat tip to Dulquer for willingly subordinating himself to the requirements of the script. A hat tip and a salaam to Anoop for envisioning a primary role for an older woman star in an industry that marginalises women of all ages, more so those past 30/35. 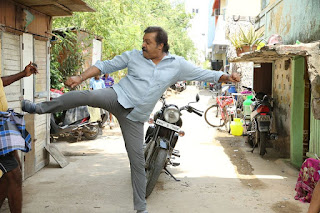 Varane Avashyamundu is set in an apartment complex in Chennai, home to a disparate group of people. Shobana plays Neena, a French teacher and single mother whose daughter Nikitha (Kalyani Priyadarshan) is obsessed with arranging a marriage for herself. Dulquer plays a chap nicknamed Fraud, sharing a home with his much younger brother and a lady he calls Akashavani (K.P.A.C. Lalitha). This sociable gang are a sharp contrast to their diffident, hot-tempered, lonely neighbour, the retired Major Unnikrishnan (Suresh Gopi). 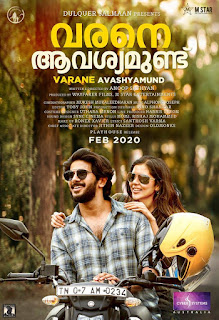 From the moment we are introduced to these characters, it is not hard to guess where they will end up. Despite that predictability and the incompleteness of a couple of the relationship graphs, the overall pleasantness of the narrative, the progressiveness that goes beyond just the casting and the collective charisma of the actors combine to elevate the film to another level altogether.
So yes, I would certainly have liked to better understand Nikitha’s long-standing resentment towards her loving mother. It would have been nice to better explore Fraud’s equation with his little sibling. And names like Fraud and Akashavani sound more than a bit pretentious. But in other areas, Anoop’s script proves unexpectedly satisfying.
For one, the romance between Neena and the Major develops smoothly without caricaturing either of the individuals involved or mocking their age. Second, the warmth between Nikitha and the parent of one of the potential grooms she finds online is heartwarming. Varane Avashyamundu has an easy sense of humour, and like his father, Anoop has an easy storytelling style. He also reveals himself to be a thinking writer when he features older people who turn out to be more forward thinking than their children, contrary to prevalent ageist assumptions that equate liberalism with youth. And most important, in an industry that has for decades now displayed a casual approach to domestic abuse, it is a relief to see a Malayalam film in which a husband’s violence towards his wife is considered condemnable.
The cast is uniformly likeable and the statuesque Shobana’s presence made me yearn for more of her in future (though I wish we were listening to her voice rather than Bhagyalakshmi dubbing for her here). Anoop elicits a relatively controlled performance from Gopi, during which just once does he allow the actor’s trademark mannered style to surface in a scene in which the Major asks a troublemaker menacingly, “Ormayundo ee mukham?” (Do you remember this face). That’s another thing – the film’s referencing of popular Malayalam cinema needed to be better written, and it could have done without that running joke about how Neena resembles Shobana.
But she is hotness and dignity personified, her co-stars are all easy on the eye and the storyline is sweet even if not extraordinary, making Varane Avashyamundu a happy overall experience.
Rating (out of 5 stars): 2.75
This review has also been published on Firstpost:
https://www.firstpost.com/entertainment/varane-avashyamundu-movie-review-shobana-dulquer-a-sedate-suresh-gopi-and-a-sweet-story-whats-not-to-like-8051061.html
Posters courtesy: https://www.facebook.com/DQSalmaan/
Source: annavetticadgoes2themovies