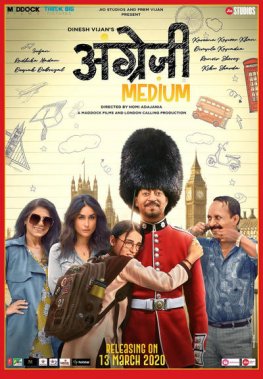 Angrezi Medium’s opening does not bode well for what is to come. Text on a black screen at the start offers an amusing definition of the Hindi word “pita” and while translating that definition into English, mistranslates “pita” as “parent”. Ummm, “pita” is “father”.
This is a curious slip-up because despite the post-1960s Bollywood tradition of marginalising women, mothers have been deified to kingdom come by this film industry. And if a deeper meaning is sought to be conveyed here, about the protagonist (a man we have yet to meet) doubling up as Mum and Dad to his child, sorry, it does not come across. This throws up a troubling question right at the start of Angrezi Medium: would the film proceed to take the marginalisation of women to new lows? Despite its opening misfire, the answer is: actually not.
Director Homi Adajania’s Angrezi Medium stars Irrfan as Champak Bansal, a widower in Udaipur who will go to any lengths to ensure his daughter Tarika Bansal’s happiness. Tarika has always, always dreamt of seeing the world, and when an opportunity to travel to London comes up in her late teens, she eyes it eagerly. Champak must overcome his fear of losing her, financial challenges and his penchant for being indiscreet to help her get there.
Through a series of misadventures, Tarika does end up in London, so do Champak and his cousin Gopi. As you would have gathered from the trailer, the men are pretending to be someone they are not, leading to a further series of misadventures, mishaps and misunderstandings.
There is great drama in the plotline, but it is not over-dramatised in its presentation. The result is an even-toned narrative and a consistently funny, consistently reflective story on the balance that must be struck between holding on yet letting go in any loving relationship that does not suffocate either party.
Angrezi Medium is Adajania’s fourth feature. His debut, Being Cyrus, was an edgy thriller. Cocktail was a step down with its revival of outmoded gender and sectarian stereotypes. Angrezi Medium is debatable but interesting.
This new film is a follow-up but not a sequel to the 2017 hit Hindi Medium in which Irrfan and Pakistani star Saba Qamar played a Delhi couple desperate to get their daughter out of the old-fashioned, traditionalist milieu of Chandni Chowk and into an English medium school in the capital’s snootier quarters.
Like Raj from Hindi Medium, Champak too can barely speak English, a language that continues to have aspirational value across India. This, however, is an extraneous point in Angrezi Medium. Champak is not quite as wealthy as the BMW-driving Raj, but he is financially well off. Money too is not the driving force of this plot. The focus of Angrezi Medium is Champak’s single-minded commitment to Tarika that leads him to introspect about his conservatism while she reconsiders her somewhat conventional interpretation of taking flight. 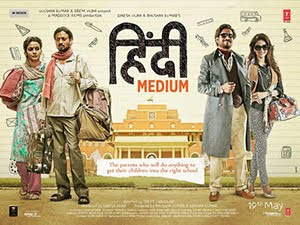