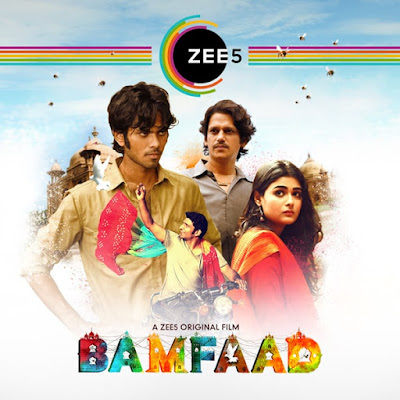 A college-going ruffian in Allahabad operates on a short fuse. He is loyal to his friends, takes on those who cross swords with them, longs to meet the city’s crime-kingpin-cum-political-influencer and falls for a pretty stranger. Nasir Jamaal’s misdemeanours lead to a more grievous act when circumstances are manipulated by an individual who is well-acquainted with the young man’s combustible nature.
Director Ranjan Chandel’s Bamfaad(Explosion/Explosive) stays with Nasir’s battle for survival when life spirals out of control, beyond anything his bravado and a fist fight can fix.
Chandel has co-written this story, screenplay and dialogues with Hanzalah Shahid. The film, which is streaming on Zee5 from today, has already drawn some attention because it is presented by Anurag Kashyap (who Chandel earlier assisted), serves as a debut platform for the son of veteran actors Swaroop Sampat and Paresh Rawal (Aditya Rawal plays Nasir) and is the first Hindi film starring Shalini Pandey who made her big-screen debut in the nationally debated Telugu hit Arjun Reddy (2017).
True to its title, Bamfaad has a fiery start. The striking introduction melds realism, humour and an earthy song. You know it has emerged from the Anurag Kashyap School of Filmmaking when, in the opening minutes in the background, singer Vishal Mishra belts out that exuberant, mischievously worded title track (music: Mishra himself, lyrics: Raj Shekhar). You know the film has been designed as a showcase for Rawal Junior when, during the course of that number, the screen is given over entirely to his lithe frame moving towards the camera as he emerges from a darkened space into the light, a device Bollywood uses only when it sees an actor as larger-than-life-hero material.
Whether Rawal will live up to that expectation is a question for crystal-ball gazers. What can be said for sure is that in Bamfaad he reveals himself to be a natural actor with solid potential. His physique is also a pleasant change from the steady stream of star sons flowing out of Bollywood in the past decade, whose bulging muscles and soulless yet perfect dancing have borne such a strong resemblance to each other that they have come across as clones assembled in the same lab. Rawal is no clone. No way.
The women in Bamfaad’s storyline are secondary players, and Pandey’s Neelam is no different. She is efficient in the role of a quietly assertive woman, but lacks a spark.
The stand-out performers in the cast are Vijay Varma playing a criminal named Jigar Fareedi, and Jatin Sarna as Nasir’s friend.
The first half of Bamfaad is pacey and interesting. Prashant Pillai’s background score is intelligently utilised and the songs are slipped smoothly into the narrative. The big twist in Nasir’s journey is deftly edited and directed, and leaves in its wake considerable suspense over what will happen next.
Sadly, the second half of Bamfaad does not live up to the promise of the pre-interval portion. After that mid-point drama, the writing wears thin. There are two nice turns, both involving policemen, but nothing so exciting as to make the film stand out from the other crime sagas that have populated the Hindi filmverse for two decades now.
Maybe things would have been different if we had never seen Vidhu Vinod Chopra’s Parinda (1989), Ram Gopal Varma’s pathbreaking Satya (1998) and Company (2002), or the best of Kashyapand others that came next. Maybe too things would have been different if the past two decades had not brought with them so many memorable visits to small towns and small-town romances in Uttar Pradesh. Anyone following in those footsteps needs to conjure up something truly unusual, inventive and extraordinary to pass muster. Bamfaad works up to a point, but not further.
The writing of the characters’ motivations and their relationships requires more depth, the bows to Allahabad and its culture are sparse, and post-interval it feels as if the director mistook limited energy for a naturalistic storytelling style.
Still, Hanzalah Shahid and Ranjan Chandel are talents to watch out for. For one, in this era of stereotype-ridden, Islamophobic Bollywood rants like Padmaavat, Kesari, Kalank and Tanhaji, it is nice to see a film in which the protagonist is a Muslim, but is not given any stereotypical markers of the religion, and members of the community are treated as regular humans: some good, some not, some evil, some not.
This is not to suggest that Bamfaad avoids a political comment on the present real-life context in which it has been released. The film does reference the danger looming over Hindu-Muslim equations in today’s India, although that is not a primary theme.
Besides, how can one not make note of artists who can conceptualise a scene in which a love-lorn youth gazing at the object of his affection tells her that pimples look good on her face? He does not say “even pimples”, he simply says “pimples”. Oh the sweet innocence of those words! Because of course on her they are an adornment, not a skin eruption – “that dress looks good on you”, “the new hairstyle looks good on you”, “pimples look good on you”.
Bamfaad is not quite the explosion it was meant to be, but it has its merits and its moments and is an engaging watch.
Rating (out of 5 stars): 2.5
This review has also been published on Firstpost:
https://www.firstpost.com/entertainment/bamfaad-movie-review-aditya-rawal-makes-his-mark-in-an-engaging-even-if-generic-crime-and-love-saga-8247841.html
Poster courtesy: Zee5