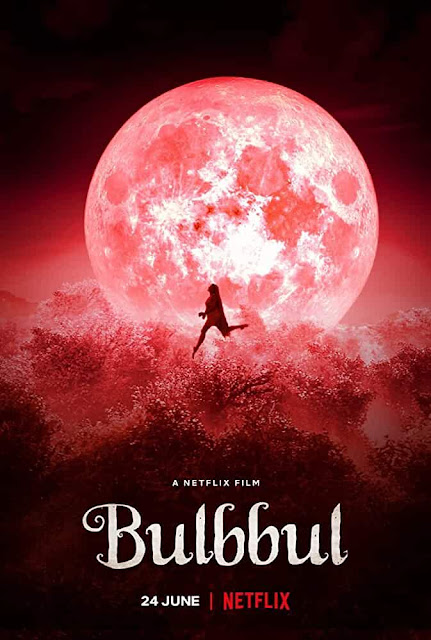 I really enjoy the way Anushka Sharma’s mind works.
I am not referring to this film alone for which of course writer-director Anvita Dutt must first be cited. The mention of Sharma right at the start of this review comes because of a pattern emerging from the choices this talented actor has made in her avatar as a producer in the past half decade. Her debut production, NH10 in 2015, was a feminist crime thriller. Then followed two supernatural flicks, one a romance (Phillauri, 2017), the other a horror movie (Pari, 2018). Just as she is reaping accolades and fending off outraged conservatives for her socio-political crime series Paatal Lok on Amazon Prime, here comes her first feature film to be released directly on a streaming platform.
Bulbbul combines what appear to be Sharma’s two primary interests – feminism and the paranormal – that earlier came together in the terrifying Pari. Her courageous, non-conformist filmography as a producer is at odds with her off-screen image in recent years of being a supporter of the current right-wing regime.
In Bulbbul, the viewer is transported to the Bengal Presidency in 1881, where child marriages were a norm, and women born or married into aristocratic families were expected – no differently from today – to stay silent about the injustices meted out to them by patriarchy, their caste privilege notwithstanding.
A sense of foreboding descends on the screen from the very first frame on the wedding day of a little girl (Ruchi Mahajan), and in the palanquin on the way to her marital home, as a kind older boy tells her the story of a murderous, bloodthirsty chudail (female demon).
Twenty years later, the girl is now a gorgeous but oddly detached young woman (Tripti Dimri) presiding over her mansion while her husband (Rahul Bose) and his twin brother are nowhere to be seen, her elder sister-in-law (Paoli Dam) has been relegated to insignificance and her attractive brother-in-law (Avinash Tiwary) returns after a long absence. 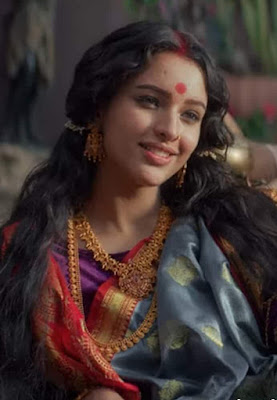 Director Amar Kaushik had blended humour and the other-world in his Stree in 2018 to turn the tables on men who suppress women in the guise of concern. In a completely different genre, in Bulbbul the conceptualisation of the spirit cocks a snook at anti-feminist propaganda and stereotypes of the man-hating woman. At a very basic level, to me Bulbbul is what Devdas might have been if in a paranormal revisitation of that classic, Paro had turned round and landed a tight slap on the eponymous loser hero’s face.
Dutt is an accomplished lyricist, screenplay and dialogue writer for Hindi films. With Bulbbul she makes her debut as a director. Her writing for this film combines superstition, mythology and history, fantasy, folktale, feminism and fable, to deliver a story drenched in a deep sadness and the blood of women across centuries who have suffered and fought battles so that some of us may today enjoy freedoms that they could not, giving us the strength to fight newer battles against the cruelty that still survives.
The fabulous atmospherics in Bulbbul are a product of Amit Trivedi’s music in collaboration with DoP Siddharth Diwan’s low-lit colour-saturated frames and the production design by Meenal Agarwal in the leading lady’s resplendent house and neighbouring areas.
Bulbbul does not often venture into bright daylight. Using a palette reminiscent of the lovely Tumbbad (2018), it bathes the screen in shades of red with flashes of gold – the red of the Hindu bride’s clothing and sindoor symbolising the red of a virgin’s blood flowing on her wedding night and onward into a river of silent suffering or rebellion or both.
The chudail in Bulbbul fits the physical description of the furious female spook of Indian folklore – beautiful, with long hair and feet twisted backwards. Dutt however gives even that convention a neat – and heartbreaking – twist. This mystery woman is not summoned up here to startle the audience in the way traditional horror films do, but instead to set us thinking. (Note: please read this paragraph after watching the film) She is a personification of the rage of the marginalised, and a stark portrait of what the world might be if the oppressed – in this case, women – were to unleash their rage on the oppressor. She reminded me of a conversation I had aeons back with a senior friend who said she hoped I would not become one of “those angry feminists”, to which I remember replying, “But considering all that we are subjected to, should you not be asking why we women are so calm, and why we are not angrier?” (Cautionary note ends)
For a film that is so thoughtful in its take on gender politics, it is surprising that  Bulbbul  uses a mentally challenged character as one of its metaphors for patriarchy in an India that remains largely ignorant about disabilities of the mind. I also wish the woman-as-goddess trope had not been thrown into the mix, especially since it is articulated by a man in the film. After all, pedestalisation has long been used by patriarchy to deceive women into thinking they are valued, when in fact they are being set up to be pulled down when the system pleases. The film might also have been better served if the character of Bulbbul’s brother-in-law Satya had more detail.
Of the men in the storyline, the one given most heft by the writing is the doctor (Parambrata Chattopadhyay) who becomes the heroine’s friend. And of her many relationships, the one I found most complex was with her sister-in-law, Binodini – two women united in mutual despair yet playing games with each other for survival.
Dutt has assembled a solid cast for Bulbbul. Tripti Dimri as the title character lives up to the promise she showed in Laila-Majnu. Her Bulbbul is in a state of constant internal turmoil camouflaged by an enigmatic demeanour, which the young actor conveys almost imperceptibly with the lightest of touches.
Dimri’s co-star from Laila-Majnu, Avinash Tiwary gets a role here that is not flashy like the one he had in that film or the delightful but underrated Tu Hai Mera Sunday. He too is a picture of understatement. Ruchi Mahajan who plays the child Bulbbul is a dear. My pick of the supporting cast though is the unfailingly good Chattopadhyay.
Since the film is set in Bengal, it requires a suspension of disbelief to accept characters who are all speaking Hindi. Dutt wisely does not ask her non-Bengali actors to do exaggerated Bengali accents to convince us of their characters’ ethnicity – the milieu is right, the look and styling are on point, thus making it possible for the viewer’s imagination to do the rest of the work.
Among other joys that it offers then is the fact that Bulbbul is one of those rare contemporary Hindi films to travel beyond the Hindi belt and Punjab to a culture and place that Bollywood does not often visit these days. With its eerie air and mythical, mystical tone, Dutt’s film brings alive a spectre that is not scary in the way the average Hindi film bhoot or daayin is – what is scary are the circumstances that brought this creature to such a pass.
Rating (out of 5 stars): 3
Gulabo Sitabo is streaming on Netflix.
This review has also been published on Firstpost:
https://www.firstpost.com/entertainment/bulbbul-movie-review-anushka-sharmas-continuing-interest-in-the-paranormal-yields-compelling-results-8519781.html
Poster courtesy: IMDB
Source: annavetticadgoes2themovies