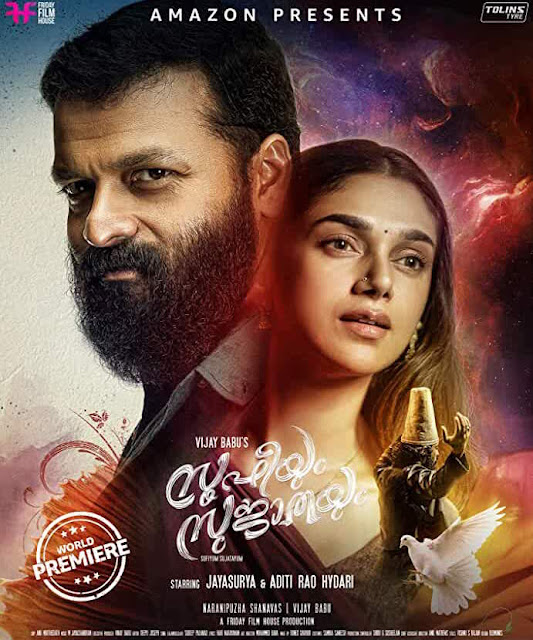 This is not the first time star-obsessed India has witnessed such an occurrence, and it is unlikely to be the last. Back in 2008, Kuselan – a Tamil remake of Mollywood’s Katha Parayumpol – was heavily marketed as a Rajinikanth-starrer though the iconic actor only had a cameo in it. Now in 2020, the promotions of Sufiyum Sujatayum have created the impression that Jayasurya, one of the leading lights of contemporary Mollywood, is the film’s male protagonist. Fact: Jayasurya plays a supporting part. He is not the lead.
Such deceptive marketing might have been partly forgiven if Sufiyum Sujatayum had something worthwhile to offer. It does not. This story of a dance teacher called Sujata in love with a young Sufi at a Muslim shrine in her town is not just superficial in its treatment of inter-community romance and tensions, it is also pretentious and dull.
Aditi Rao Hydari plays Sujata who happens to be mute. Jayasurya plays the man her father forces her to marry. And first-timer Dev Mohan has been cast as the Sufi.
Writer-director Naranipuzha Shanavas uses silences, close-ups of Sujata’s delicate face and feet, religious chants and mood cinematography as a substitute for writing depth. The first half of Sufiyum Sujatayum takes too long to establish the heroine’s love story. The second half wanders too long before taking us to an interesting twist involving a graveyard in the final half hour, but Shanavas squanders that plot development when he immediately circles back to the unexciting relationship between Sujata and the Sufi.
Frankly, that pre-climactic twist by itself had the potential to be expanded into a brilliant socio-political satire on Hindu-Muslim strife in today’s India, but Shanavas clearly failed to recognise his own clever idea. What he gives us then is a listless, unremarkable film.
Although the credits feature a bunch of respected character artistes, no one stands out since no one’s talent is put to great use. Dev Mohan is given little to do beyond look pretty and occasionally, briefly whirl as dervishes do. It is a measure of Jayasurya’s charisma that although his character is mostly confined to the second half, he still manages to leave a stronger impression than the lead pair.
As for Rao Hydari, she fails to live up to the hype generated around her in the run-up to this release. The marketing team’s decision to tomtom Sufiyum Sujatayum as her “return to Malayalam cinema after 14 years” is almost embarrassing for two reasons: first, because her role (on debut) in the Mammootty-starrer Prajapathi in 2006 was minuscule, clichéd, unmemorable and insignificant; and second, because since then she has spent most of her career in Bollywood where she has struggled to make an impact. Despite the promise she showed in Yeh Saali Zindagi (2011) and London, Paris, New York (2012), she has packed her CV largely with Hindi films in which she has barely had anything to do beyond look sweet and fragile on the sidelines while men go about their business.
Don’t get me wrong: Rao Hydari is good-looking, moves with dancerly grace, and if the aforementioned Hindi films are a barometer, is a capable actor. But the problematic marketing of Sufiyum Sujatayum has ended up drawing attention to the faults in her filmography that make it hard to assess this performance. You see, her characters in most of her Hindi films have hardly had any spoken lines (for one, watch Wazir); as a result – and this is the harsh truth – when she plays a mute woman in Sufiyum Sujatayum, in terms of acting she is not actually doing anything vastly different from her earlier work. Yes, Sujata sometimes resorts to sign language, but Shanavas uses that aspect of her more for the visual appeal of the actor’s attractive, fluid hand movements than as a building block in what could have been a complex character.
Apart from its soulful music and overall prettiness, one of the nice touches in Sufiyum Sujatayum is the way languages other than Malayalam are woven into stray dialogues to indicate the somewhat cosmopolitan nature of the town in which the story is set; it is also nice that the subtitler lets us know when a character has spoken a non-Malayalam tongue. However, considering that the main characters all converse with each other in Malayalam, there is something odd about the way a couple of lines from a Hindi song run in the background out of the blue when Sujata experiences heartbreak, and Hindi lyrics pop up again with the end credits – the switch in language makes no sense here, it has no contextual relevance, but it places Shanavas in an expanding club of Malayalam filmmakers who seem to think Hindi is a signifier of coolth, in the way Hindi filmmakers once viewed English. The only contemporary Malayalam director who has been able to pull this off without any logic to support his choice is Lijo Jose Pellissery when he slipped Do Naina into Angamaly Diaries – it worked perhaps because the scene in question was overall so beautifully constructed. Not so in Sufiyum Sujatayum.
Kerala may seem like an idyll of communal harmony when compared to the tattered social fabric of north India in 2020, but the troubling reality is that all is not well between communities in the state popularly described as God’s Own Country. Sufiyum Sujatayum was an opportunity to dwell on the opposition to Hindu-Muslim marriages in Malayali society, a theme that was so sensitively handled by another Shanavas – director Shanavas K. Bavakutty – in the terrific Kismath in 2016. Instead, Naranipuzha Shanavas devotes himself to the spectacle he is trying to create in Sufiyum Sujatayum, and just about skims the surface of his chosen theme.
Rating (out of 5 stars): 1.5
Sufiyum Sujatayum is streaming on Amazon Prime Video India.
This review has also been published on Firstpost:
https://www.firstpost.com/entertainment/sufiyum-sujatayum-movie-review-jayasurya-is-more-effective-in-his-supporting-role-than-the-leads-of-this-listless-film-8555331.html
Poster courtesy: IMDB
Source: annavetticadgoes2themovies