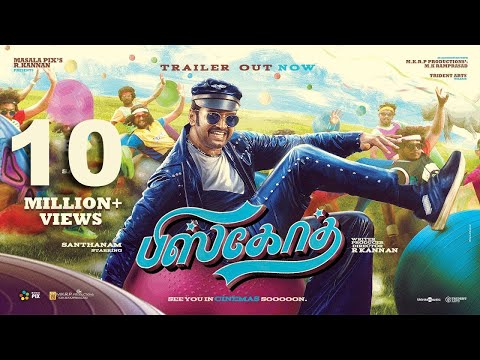 Review Of Biskoth On ZeePlex: The New Santhanam Comedy Is Unfunny Across Three Time Periods

Biskoth, directed by R Kannan, is an explosion of all things silly. But that’s not entirely a bad thing in a comedy as long as those big LOL moments keep coming. In Biskoth we find Santhanam travelling across three time zones inspired by three movies — Baahubali, Billa and 300. These are all conducive for some crazy laughter given their worlds and how it’s easy to spoof them. For instance, imagine how funny it is to think of Mottai Rajendran as THE Hercules or Mottappa in a comic setting where other everyday characters go by names as strange as Morpheus and David Billa.

The idea is clever and the actors are certainly competent but instead of running with it, the film plays it safe and tries to make sense of a senseless screenplay. Like the idea of using a prophetic old lady (Sowcar Janaki in her 400th film) as a narrative tool. The stories she tells during nighttime, we are told, will take place for real. Raja (Santhanam), listens to them and waits for these predictions to take shape for his life to improve. But the writing is so plain that it feels like three stories and their corresponding ‘realities’ repeat one after another in a tiresome episodic pattern, with nothing innovative happening in between.

Even the spoofing isn’t as clever as what we saw in the two versions of Tamil Padam, where we felt the makers pushing limits in their efforts to show a mirror to our films and the industry. It’s all a bit immature to assume that funny clothes and a strange setting would themselves present the jokes after the novelty wears off.

Strangely, the film also brings back the Santhanam brand of comedy that one felt we had outgrown. In a sequence that’s too wrong for 2020, we see his character judging a woman for the size of her dress (“It looks like you can wash this dress in a mixie instead of a washing machine”) and because she drinks. Naturally, such a girl doesn’t even feature as his love interest because she isn’t the traditional, kurta-wearing ‘good girl’ he eventually falls for.

What’s weirder is the idea of a terrible prank played on Raja. After a night of heavy drinking, Raja wakes up naked in bed. And when he sees a large, dark-complexioned woman sitting there, he imagines the worst…that he slept with her! But even this scene becomes more offensive when this woman, along with his friends, calms him down, telling him that it was just a prank and that he didn’t actually do anything with her, as though it would have been the worst thing to happen to him.

With silly fights and one too many shit jokes, the film never rises above being juvenile, making even its short duration difficult to sit through.

The post Review Of Biskoth On ZeePlex: The New Santhanam Comedy Is Unfunny Across Three Time Periods appeared first on Film Companion.

Review Of Biskoth On ZeePlex: The New Santhanam Comedy Is Unfunny Across Three Time Periods