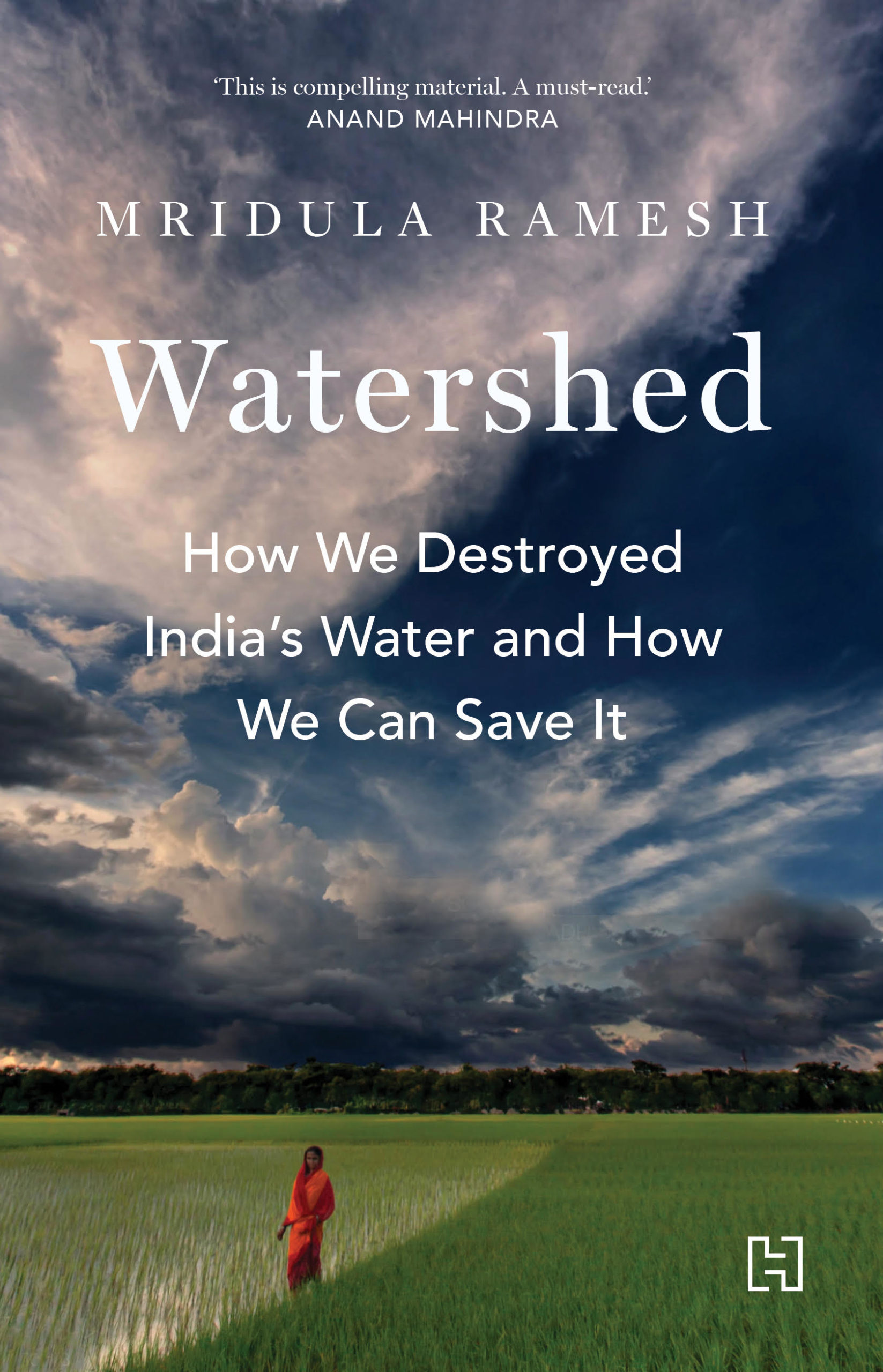 Watershed: How We Destroyed India’s Water and How We Can Save It is a powerful follow-up to Mridula Ramesh’s earlier work on climate change in India. In the introduction she quotes Paul Dickinson, co-founder of the Climate Disclosure Project, who is credited with saying, “If climate change is a shark, then water is its teeth.” The quote has been attributed to others, which only emphasises the power of the analogy in illustrating how the immediate impact of climate change has been through water-related disasters – floods, droughts and massive multi-dimensional disasters like glacial lake outburst floods that trigger landslides. Climate change is here, and India is already feeling its bite.

Ramesh’s book is part history, part anecdote and part exhortation for change. The research underlying it gives it particular power, and she chooses her stories with care. The opening chapters are science-heavy, telling stories of the monsoon and the reasons for its variability; of droughts, cyclones and the impact of climate disasters in a country where water availability is dependent on rain.

The scope is historically vast, and the fall of both the Indus Valley Civilisation and ancient city of Pataliputra serve as particularly strong insights on the power of water to end civilisations through drought and flood. On the former, Ramesh explains how research suggests that its decline was due to the summer monsoon weakening for 200 years. The latter’s downfall was incessant rainfall over nearly 17 years, which would have undermined a kingdom surrounded by rivers.

Both these civilisations, she suggests, had drawn their strength from effective water management, but there are limits to human ingenuity in the face of catastrophe. Nonetheless, Watershed is primarily about how care and human ingenuity can at least manage a disaster – to an extent. Our current problems in managing India’s watersheds, she suggests, are manageable. India can self-correct, but only if it gathers data, realises its strengths and proactively strengthens the three vectors of water management that offer a way forward: forests, water tanks (a term that refers to small water bodies in South Asia) and wastewater management.

In terms of clearing forest for farming land, Ramesh identifies a small break with Mughal land management and the big break with British colonial rule. In this she is only partially right. Some issues have a longer history. As the social scientist Prakash Kashwan mentions in his book, Democracy in the Woods: Environmental Conservation and Social Justice in India, Tanzania, and Mexico, the management of forests has a depressingly similar shape across millennia. The Manusmriti, written between 400 BCE and 200 CE, proclaimed the “sacred right of first possession for the people who clear the land, even if they have taken use of the land away from others – for example, hunters and pastoralists”. The 17th century Mughal emperor Aurangzeb declared that “whoever turns (wasteland) into cultivable land should be recognised as the (owner) and should not be deprived (of land)”.

Nonetheless, the period of British colonial rule did mark a sharp break, not so much because of land management practices, but due to the underlying philosophy underlying that form of governance. Both the East India Company (for obvious reasons) and the British Raj were focused on profitability rather than stability. Ramesh identifies the ideas of Francois Bernier, the 17th century French physician and traveller, that India could be “better managed” by Europeans, as well as how the British ‘free trade’ was neither fair or free in the empire. But to get a better idea of how colonial practices affected forest land, and the ecological balance, an excellent companion book is Dane Huckelbridge’s No Beast So Fierce: The Terrifying True Story of the Champawat Tiger, the Deadliest Man-Eater in History. Focused on the emergence of a spate of man-eating tigers, Huckelbridge shows how previous practices in ecological management in Nepal and India, based on rulers and subjects alike identifying with forests (and tigers), were upended by a ‘development’ ethos based on controlling nature and extracting as much financial wealth as possible, which led to ecological devastation.

Watershed shows how this deeply impacted Indian agriculture through centralisation and fixed tax revenue in cash rather than as a proportion of harvests, delinking taxes from fluctuations in production. The introduction of high-value cash crops – many of them unsuitable to the climates they are grown in – linked to global markets through railways also led to large irrigation projects, and a technological obsession with controlling nature through dams and canals. In the process, massive forest areas were cleared (leading to increased human-animal conflicts, as shown in No Beast So Fierce), the management of water bodies neglected, and local decision-making subordinated to massive infrastructure projects.

To a degree India has continued down this path post-Independence. In his first speech as prime minister in 1947, Jawaharlal Nehru stated that freedom had been achieved, “not wholly or in full measure, but very substantially”. The ‘not in full measure’ included large infrastructure projects that the country would undertake; ones that Nehru himself would later critique as the “disease of gigantism”. These continue to dog India’s problems in managing water, not least the overreliance on dams, the neglect of forests and a blind belief that we can ‘control nature’.

A striking illustration of this in Watershed is how deforestation in Kerala played a major role in the devastating floods and landslides of 2018. And yet, in their report to the recent Parliamentary Committee on Water Resources experts from Kerala blamed the slow pace of clearance of forests for dams as the reason that they could not better manage floods!

There is obviously something amiss. For Ramesh, much of this rests on improper incentives. These include free electricity for agriculture, the importance to politicians of delivering infrastructure rather than managing it, and a large disregard for water as an important issue for the body politic. This is catastrophic, especially as climate change bites deeper, but it is catastrophic in different ways for different people, with the poor paying the higher price. In one example, near the beginning of the book, Ramesh describes two farmers facing drought. The first has no access to irrigation – like half of India’s farmers. He must borrow to plant, water and fertilise his fields, and only incurs losses. The second, who has irrigation, also borrows and has a fall in yield. However, because the drought has depressed production, his crop gains far more in price.

Throughout Watershed, Ramesh shows how such power imbalances thread through the experience of water-related disasters. They show in gender, class and caste. The solutions she presents, and the next steps she suggests, are therefore not just about addressing India’s water crisis, but also a parallel crisis of unequal opportunities that is growing alongside India’s climate crisis. Her focus is primarily on making water management compelling, and she identifies key ways in which civil society action, corporate social responsibility and individual responsibility can help bring this about. There is, though, a certain disjuncture here. In the book the examples of large-scale change she gives – in Gujarat and Madhya Pradesh – are primarily driven by Indian states, by specific incentives like Minimum Support Prices, metred connections and so forth. The question left unanswered is how does one motivate state governments to do this? And how do we build a system of cooperative federalism that would lower the rising tensions over India’s shared, but diminishing, bounty of water?