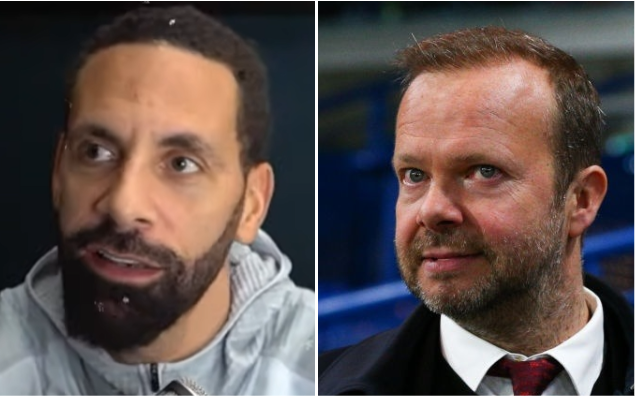 Rio Ferdinand has detailed the brutal way in which Ed Woodward told him his Manchester United career was over.

The former England international made over 300 Premier League appearances for his former club during the course of 12 trophy-laden years at Old Trafford.

Ferdinand was the defensive rock on which much of the success United enjoyed under Sir Alex Ferguson was built, but his departure was sealed during a brief exchange with the club’s executive vice-chairman.

He told The Daily Mail: ‘He told me they weren’t going to renew my deal and that was it.

‘You expected a little more given the service you had given and the way you see other people leave football clubs who may not have done as much as you.

‘It left a bitter taste. But maybe life ain’t fair. I have spoken to Ed since. It’s fine. He knows. He has apologised.’

Woodward has proven to be a hugely divisive figure since his appointment to the board back in 2005 but will be standing down imminently in the wake of the United’s withdrawal from the ill-fated European Super League.

Speaking about Woodward’s decision to stand down ahead of Sunday’s match against Leeds, manager Ole Gunnar Solskjaer said: ‘Football is emotions and emotions run high in football.

‘I’ve had a very, very good working relationship with Ed and the club will have to move on without him.

‘I’m sure Man United will always move on. I’ll work as long as Man United want me to work here and hopefully we can end this season successfully and he’s part of that.’