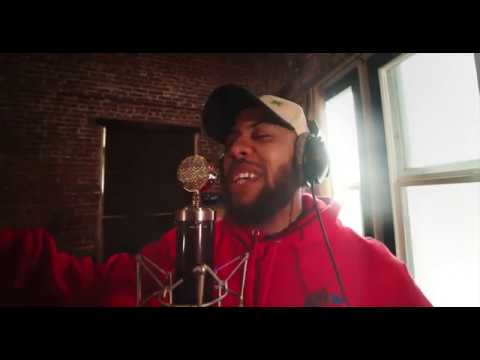 Bocha Deontray Henderson
Bocha didn't have plans to make a video for "Brown Skin," a track from his vibrant new EP I Like U. But just last week, the rising rapper insisted the team at his label EYRST open up their studio and let him film a clip for the song, as he recognized that, although he wrote the song eight months ago, it still held particular resonance with the massive protests fighting against police brutality.

"I speak from my perspective of appreciating brown skin women in the first verse and the second verse I speak from my experience with the boys in blue," Bocha wrote in a statement accompanying the video. "There has been way too many brown lives lost and we will no longer allow our country to ignore the fact. So with this song I’m hoping I can play as motivation for brown skinned people everywhere to take pride in how they look and be comfortable in their own skin."

If you're unfamiliar with Bocha, now is the time to get acquainted. The artist is one of the strongest young talents in the local hip-hop scene. His understated flow masks some incisive and witty words about being Black in America and in this predominantly white city. And his cultural reach in Portland stretches beyond music as he is one of the people behind Produce, a downtown storefront that offers clothes, sneakers, skate gear, and a social lounge for shoppers.

With the release of this video today and last week's drop of I Like U, we took some time to catch up with Bocha via email to talk about "Brown Skin" and how he is reacting to the ongoing marches and protests in Portland.

MERCURY: How has it been to see the mass protests around the world and here in Portland to fight police violence?

BOCHA: It's quite a sight to see to be honest. I feel like all this uproar is way overdue, but necessary. Being from such a predominantly Caucasian city, it is a blessing to see how many people that don't look like me are out there protesting and standing up for my people to be treated equally.

Have you been able to get out and march?

I've been marching every day since our city began to march. During the day it is very peaceful, but somehow, once the sun goes down, we end up having to basically fight for our lives against the Portland Police.

You had no idea when you wrote this song "Brown Skin" that it would have such resonance to what's happening right now in our culture. Is that frustrating to think that these issues are still going on, nearly a year after you put those words down?

Yeah, I wrote the song almost a year ago just speaking from the perspective of my peers and I, and at the time, I knew it was an important song just in general for my people, but of course I couldn’t expect it to be so relevant with today. And sadly, I feel like it’ll continue to be relevant to what is going on because we're fighting a long fight. This is only the beginning. I just hope that during these times, my voice can provide a sense of comfort and pride in what we are fighting for.

Do you feel hopeful about the possibility of some serious change happening now?

I will always have hope and I do think there is a possibility for some change, but I feel we are a long ways away from the change that we are seeking as Black people. It’s a blessing to be able to see that we are headed in the right direction though.

How are you holding up in the midst of the pandemic? Are you able to continue your creative work?

Since the pandemic, it hasn’t really affected me too much creatively. I’m already a homebody so it really just forced me to stay in my room and continue to create and work on my craft. I probably have about three albums’ worth of music at this point.

Are you looking forward to being able to get Produce open again soon?

For sure! You can always order online from us in the meantime, but until we see it as safe for us to open our doors again, we will continue to stay closed for the safety of our staff and business. Produce or no juice!