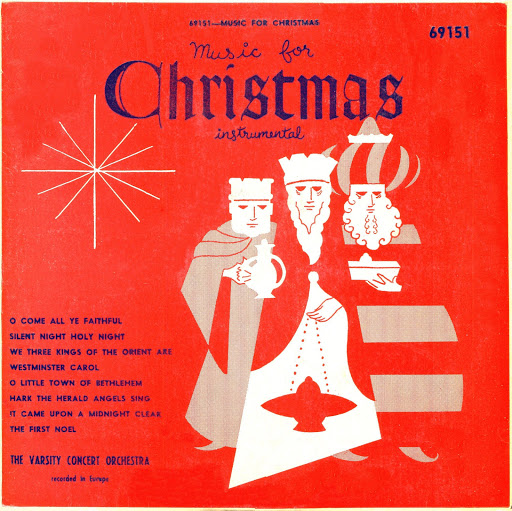 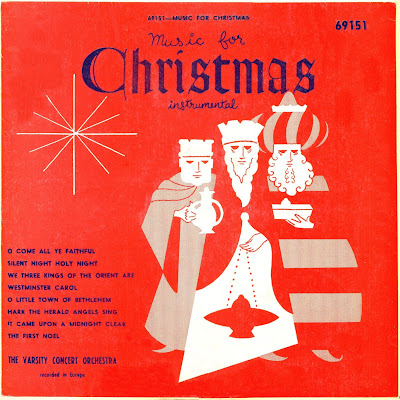 Varsity, circa 1953: "Let's put out another LP of music for Christmas.  What should we call it?"  "Um, Music for Christmas?"  "Brilliant!  Let's go with that.  Oh, by the way, somebody remind the pressing plant that our vinyl is cheap and thin.  We just got a batch, and I had to strain like crazy to snap them in two.  Usually, all you have to do is set them down too hard.  If the plant wants to do quality vinyl, it comes from its budget, not ours."

Today's Varsity low-low-low-budget LP (a ten-incher) is the usual thin Record Corporation of America vinyl, and it's needle-trashed, besides.  I had my doubts when it came to getting a usable file, but turns out a 78 needle was the best answer.  What happened is that I accidentally left my 78 stylus inserted when I test-played this, and I was surprised at the halfway decent sound.  (What's with the somewhat inflated bass, I dunno.  I suspect this has a RIAA EQ, or something close, so it's likely just lousy engineering.)  Mainly, I just had to eliminate some loud pops, and I got the fidelity up to about a B-, at least by Varsity standards.  Okay holiday background music, and it's just so shamelessly cheap, I had to feature it.

Junk label, but pretty good tracks, and a rather cute cover.  Varsity LPs are usually too hopelessly poorly pressed to get a decent file out of, so this is kind of historical.  I'm going to try my 78 styli on my other Varsity long-players.

On the jacket and label, the titles contain no punctuation, but... they match.  Same order.  That's quite unusual.  Oh, except the cover lists track three as We Three Kings of the Orient Are.

Whew.  I was worried for a moment there--I thought that Varsity had gotten something right.  So, here's some Music for Christmas... for, um, Christmas.