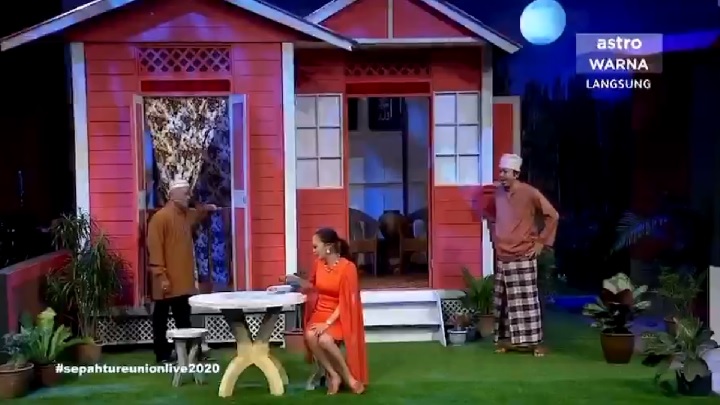 Subscribe to our Telegram channel for the latest stories and updates.

A hilarious clip of what appears to be a spontaneous ad-lib in the middle of the live recording of Sepahtu Reunion 2020 has gone viral on Twitter.

In the 43-second clip, fellow actors and even the band can be seen unable to contain their laughter at a timely reference by comedian and radio host Jep Sepahtu, whose real name is Mohd Nadzri Zainal Abidin, 35.

If you understand Bahasa, you’ll want to watch the clip before continuing.

If you don’t understand Bahasa, basically Jep is admonishing a female character, being played by Maya Karin, saying that a deceased character loved her so much.

“He registered you as an heir of his Employee Provident Fund (EPF)!” exclaimed Jep, eliciting chuckles from those watching and smiles from the band.

But the next few lines really highlighted a current issue and broke the resolve of another male co-star sharing the stage.

“Now you understand how difficult it is to withdraw that RM10,000,” says Jep, causing one of the onstage actors to double over in laughter and lean against part of the set.

Jep was referring to recent announcements by Finance Minister Datuk Seri Tengku Zafrul Aziz that people can withdraw money from their EPF funds if they had lost any income due to the Covid-19 crisis.

But as Jep points out next, it didn’t end there.

“That day they said it was okay, but then suddenly there were conditions,” he says, his voice cracking emotionally.

Both he and his fellow male co-star are then forced to turn away and hide their faces, but while Jep recovered quickly, the other guy placed both his hands on his head in defeat.

Throughout the exchange, Maya is the only one who manages to convincingly hold on to her composure, making sobbing noises while sad piano music continues in the background, though she did cover her mouth at one point.

The scene continues beyond the clip with him discussing how some people only have very little money in their retirement fund.

A Facebook commenter pointed out to us that EPF themselves have taken notice of Jep’s comedy and responded in kind.

While releasing graphics to help explain the situation, they even made one of him to represent artists who saw a drop in activities due to Covid-19.

Sepahtu Reunion Live 2020 is aired on Thursday nights at 9pm on Astro Warna (107) but you can also catch it streamed on Astro GO and On Demand for free.