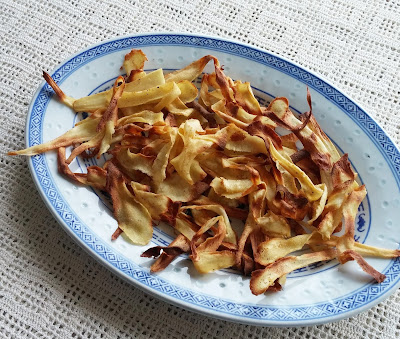 As an obsessive lover of potato chips, and as a lover of parsnips, you can bet I thought these were fabulous. You need to be picky about slicing them - getting them sliced evenly but thinly is the key to having this work.
I did 3 very large parsnips, and that's all of them on the plate. They really shrink down a lot in cooking so that's something to keep in mind. Next time I might decide it is worth breaking out the mandolin to slice them, and do twice as many. At least.
The line between "perfectly golden-brown and crisp" and "burnt and nasty" is probably about 15 seconds, so you must also really hover at the oven door for the last 5 minutes or so of cooking.
per serving
40 minutes - 15 minutes prep time

1 large parsnip
1 to 2 teaspoons mild vegetable oil
salt & freshly ground pepper OR other seasonings to taste
Preheat the oven to 375°F. Line a baking tray with parchment paper.
Peel the parsnips and discard the skins. Using the peeler, cut the parsnips into thin but even shreds. It helps to have a good sharp vegetable peeler here. You will probably get down to a point where what is left is very hard to peel into strips; give up and keep these pieces for another dish. Alternatively, and probably better; cut the parsnips into thin but even pieces using a mandolin. I wasn't going to break out the mandolin for 3 parsnips, though.
Toss the parsnip slices with just enough oil to coat them evenly, then season them to your taste and toss them again. Spread them out as evenly as possible, ideally in a single layer.
Roast the parsnips for 20 to 25 minutes, checking them and turning them every 5 minutes. Make sure they are spread out evenly each time. Towards the end, most likely some will be done before others; pick them out and put them on their serving plate then return the rest for more roasting. Keep a really sharp eye on them for the last few minutes of cooking - they will burn very quickly once they are done.
They will cool off fast, which is fine - these are kind of like roasted potato chips, only parsnips. However, they won't keep crisp well and should be eaten promptly.
Last year at this time I made Pulled Pork Caribbean Style.
Source: seasonalontariofood