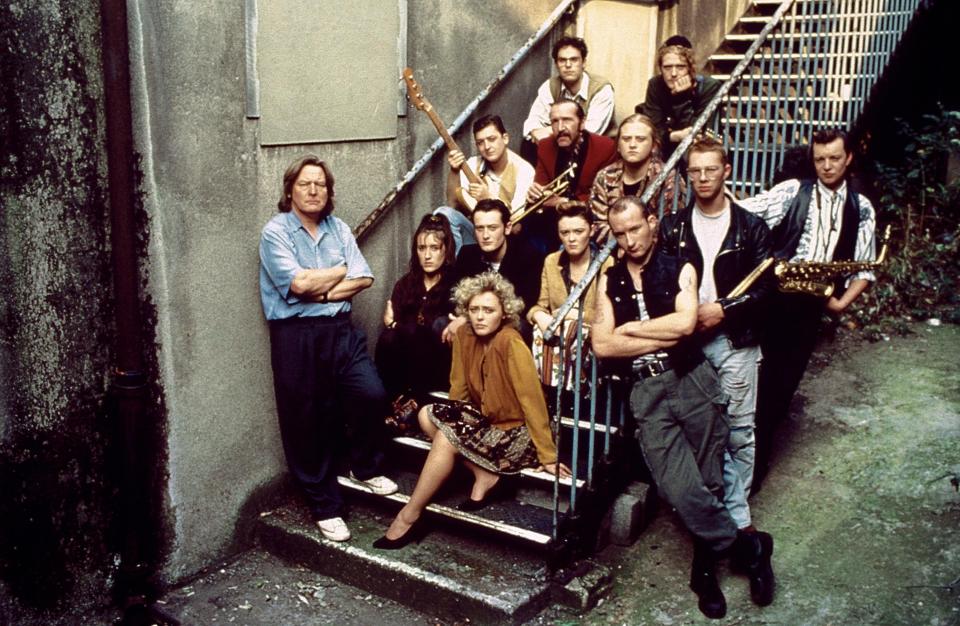 ROCK star Glen Hansard has ­spoken of how the experience of making feel-good movie The Commitments was tainted for him because of a bust-up with late director Alan Parker.

The Frames singer has revealed how the six-time Oscar-winner took him aside, as they were wrapping on the 1991 movie, to tell him “something awful.”

Parker, far left, with cast[/caption] Glen was cast as pony-tailed guitarist ­Outspan Foster in The Commitments in 1990[/caption] Director Parker was furious at Glen for holding up production[/caption]

Glen said: “I was shocked . . Alan said to me, ‘There’s always one on every movie I do’, and he said a word, an awful word I won’t repeat, it was something very rude, and he said, ‘I didn’t think it would be you’.”

The Ballymun man had been an up-and-coming indie musician when the successful director cast him as pony-tailed guitarist ­Outspan Foster in The Commitments in 1990.

However, Glen remained loyal to his indie band The Frames who were playing their first shows as cameras rolled on the million-dollar Barrytown classic.

Glen said: “The first Frames gig was in The Purty Loft on June 15th. Unfortunately, there was a simple clash of dates, and I was like, ‘I’m not skipping this gig’.

“So everybody came out to the Purty Loft. We had a night off and they all came to the gig, and the next day we were all back at work shooting the film.”

But director Parker remained furious at Glen for holding up production, and had it out with him once the film was over.

Glen added: “That did kind of sour the experience for me.”

The singer, 51, recounts his clash with The Commitments director, who passed away last summer, in Back To Barrytown, tonight on RTE One, which chronicles the story behind one of the most iconic Irish films of all time.

Original Commitments’ author Roddy Doyle also reveals in the documentary his struggle, after numerous drafts, to be credited as one of the writers of the screenplay — alongside UK team Ian La Frenais and Dick Clement.

Roddy said: “There was a disappointment with The Commitments. It was the way the ‘co-written’ aspect of it was handled. When I looked at the final script it had Dick and Ian’s names on it but not mine.

“But when I read it, I realised I wrote a considerable part of this. And I had to fight for my right — not for too long — but it could have been embittering.

“It wasn’t, but it was a lesson learned. I just thought, ‘I never want to learn something that way again’, and certainly I don’t want to read a script and realise, actually something wrong is happening here.”

While he got his credit and remains proud of the classic film, Roddy admits there are a few scenes he never liked.

He said: “I never bought into the Wilson Pickett ending, will he come, wont he? I don’t think it mattered, they were going break up anyway.

“There’s also a moment where Joey’s mum is playing the violin and there is a holy statue there. I thought, ‘That’s not the Ireland I know or want to depict’.

“There’s another gag where the piano player goes to confession. The punchline is funny but he would never have gone to confession.”

Roddy revealed how he never sat with the UK writers who were brought in by producers to write on top of his original screenplay.

He said: ‘So there were some scenes they wrote, which I had no involvement with, other scenes I wrote they left as were, and other scenes, which are cut and pastes of both our work.” Writers Ian La Frenais and Dick Clement had been fans of Roddy and say they were inspired hugely by the language of his original novel.

Ian recalled: “I read it and rang Dick and said, ‘Somehow we have to make this’. But we were warned it would be very low budget, hand-held cameras — but we said that doesn’t matter.”

However the involvement of the writing duo behind UK TV hits Porridge and Auf Wiedersehen, Pet, attracted the attention of six-time Oscar-winner Alan Parker.

Ian added: “We were quite instrumental in getting this film made, it was Dick and I who brought in Alan Parker who made an enormous difference.”

Producer Lynda Myles recalls how overnight she had three offers of finance — including one financier willing to stump up £8million for a film he had mistakenly called The Connections.

Parker insisted that his extras were all real people, and signed up most of Dublin’s Sheriff Street who he paid handsomely. The credit union in the area recorded their highest deposits ever — with extras paid £23 a day.

Three coaches would pick up invited extras from Sheriff Street each morning, with more uninvited locals sneaking into the baggage holds and emerging on set in Kilbarrack or Dun Laoghaire. Lynda added: “Everyone got paid.”

Parker refused to use big name actors for the roles, instead wanting ‘real kids from the street’. The tough Eastender used any ploy he could to get the genuine performances from his cast on screen.

Glen said: “Alan would set up an atmosphere by almost fawning over Andrew (Strong) and being a bit rude to us.”

While the director added to the confusion by asking musical director Paul Bushnell to make sure the scenes of early rehearsals featuring the backing singers, Bronagh Gallagher, Angeline Ball and Maria Doyle Kennedy, singing Ride Sally Ride were kept off-key.

Paul said: “Rather than teaching the girls three-part harmonies, we would have two girls singing one part slightly different to the other, then have the third girl trying to do a harmony and having to give up.”

However, Hansard revealed while the original cast were responsible for the early sound of The Commitments, their rapid improvement on the ears was the result of more musicians being brought in.

As a result, while all The Commitments earned the same for the film, the ones featuring on the best-selling soundtrack hit the jackpot.

Glen said: “One of the things that causes trouble in bands are when people are on different amounts of pay. That was one of the things that created a weird dynamic. I play on two songs on the record so it makes sense I didn’t get as much — but we were working class people and it did give you suspicions.”

Fellow cast member Angeline Ball recounts how expecting a small little film, the actors had their minds blown when they saw The Commitments on screen.

She said: “We were shell-shocked. Then we got the call to say that they had our visas ready, and we were being taken to America to promote the film. I just remember how sunny it was, the wide streets and the palm trees. It was very far from Cabra where I grew up.”

The Commitments had an average age of 20 when they took the world by storm. The original 11 parted ways, with some going to make more films, while others chose music — like singer Andrew Strong,

Robert Arkins, aka Jimmy Rabbitte, Maria Doyle Kennedy who released a new album this week, and Dick Massey are in touring group Stars of The Commitments. Angeline said: “When you’re young you don’t realise the fairground is going to stop. You don’t realise you’ve to get off the ride and do something else.”

con in no time

Man, 20, dies after being fatally injured at Dublin Port

Another Commitments drummer, Dave Finnegan, launched his own Soul tribute act, which went on to play Las Vegas. But he found it difficult to escape his madcap character, Mikah Wallace.

He said: “There were always guys who had go’s at me after that film . . . and it only ever happened in Dublin.”