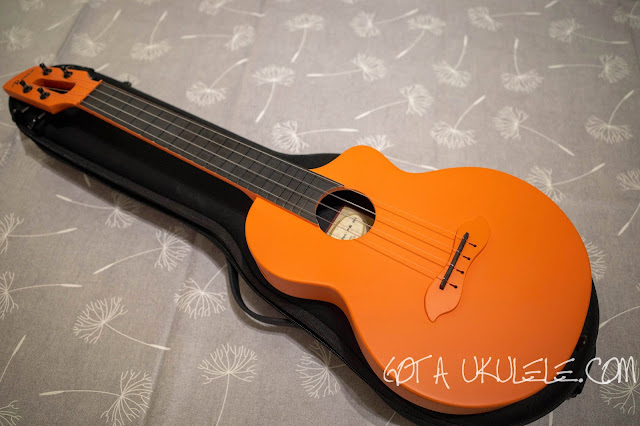 If there is one sort of ukulele we've seen a massive growth in during recent years, it's one plastic ukes. And so here we go with another - the 'eyebrow raising' Rosen Nova Concert.

Why the eyebrow raise here? Well, first up, this one bears a rather striking resemblance to another very well known plastic uke, the Enya Nova Concert.  I put a picture of this Rosen uke online some weeks ago and somebody said it wasn't a 'copy' but rather just another plastic ukulele. To be fair, the shape is slightly different and the headstock certainly is. I also admit that just because Enya made a plastic ukulele that doesn't give them the sole right to be the only people who do. BUT... there is more to just the general look for me here. Heck, they even called it a Nova!! Incidentally, Enya have confirmed this instrument has nothing to do with them and is not made at their facility. In the USA this is also extremely similar to a plastic ukulele by Donner - in fact in the body it's 100% identical. You know what? All this stuff just tires me out and bores me. Why can't brands just stick to their own developments? It's SO lazy just passing off something else.
Ho hum..
So what we have here is a composite plastic body built the same way as the Enya Nova in a similar shape, similar shallow body profile and also with a cutaway. It's not contoured like the Enya though and whilst the edges are not severe, it's a much more boxy affair. The concept is the same though with the back sides and back of the neck to the headstock all in one piece with a top and fingerboard dropped on to complete the 'clamshell'. Like most common makers of these sort of instruments (Enya and Lava included), Rosen claim this is 'carbon fiber' - but again use that term erroneously. Whether that is deliberate or not I can't be sure, but this is plastic with carbon added to the mix. It's NOT the highly expensive carbon matting in a resin like the brand Klōs use. I do wish they would stop doing that.  This.. is.. not... carbon... fibre... 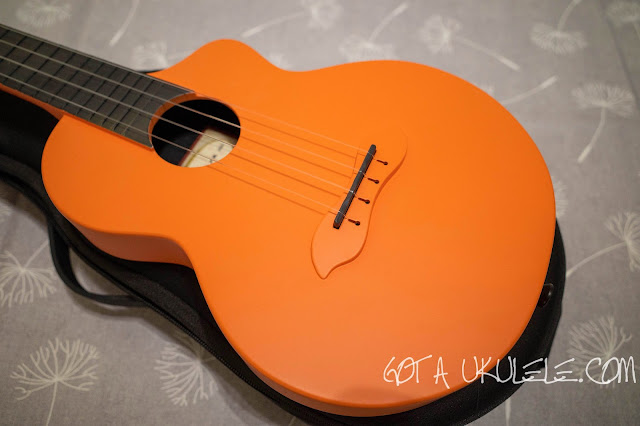 The bridge is a slot style using notched holes in the plate to anchor the knotted strings and is in an attractive moustache shape. Fitted in that is a compensated saddle in an unspecified material that I assume is more plastic. String spacing here is 40mm. That's nice enough. 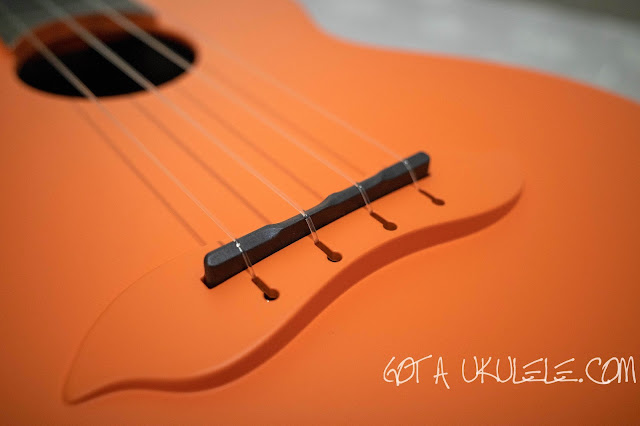 Like the Enya Nova the body is then kind of 'painted' in the outer colour as the insides are plain black. It comes in orange like this one or white, black, pale blue and pink. The feel of the finish seems more matte to my fingers, almost like the feel of a chalkboard. I much prefer the Enya. I've lately seen reports of people chipping their Enya ukes though that isn't a 'fail' for me as they are indeed painted and not a solid colour right through. If you ding a varnished ukulele you will also chip it. I suspect it's the same here. Unlike the Enya this one has a regular round sound hole in the usual place, but EXACTLY like the Enya Nova also has a side sound port on the upper shoulder which is both shaped and angled the same as the Enya.. Sigh.... 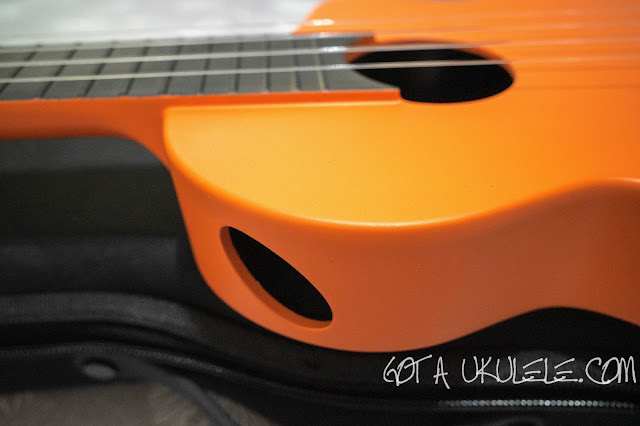 Inside is unremarkable due to the construction  so not much I can photograph. You'll spy that the top  is quite a bit thicker than the Enya too.
The neck forms part of the back and narrows to a very round profile at the nut. The Enya Nova is much shallower and was nicer for my tastes for that reason. It's the same width as the original Enya Nova at 35mm though a touch wider on spacing at 27mm G to A.  I think Enya since may have widened theirs (they certainly did on the Soprano). Sadly the profile is a let down for my hands by the broom-handle neck. Remember - Your mileage may vary here.
That is topped with a similar composite fingerboard with integral frets. You get 19 of those with 14 to the body joint. The specification suggests the fingerboard is radiused, but I can confirm, categorically, that it isn't. (The Enya is). There are no side dots facing out or down the side. But.. in a revelation that I personally found to be utterly bonkers - it comes with a 'sticker sheet' for you to attach your own.. in little star shapes (just like the Enya). Utterly ludicrous! Looking down the side of the neck the edging of the orange paint is rather scruffy and uneven. A word about these plastic frets - they WILL wear down if you use metal wound or composite strings like Aquila Reds. I read some reports of people seeing wear on the Enya ukes, though personally have owned one for over two years and can't notice any. The same caution applies here though. 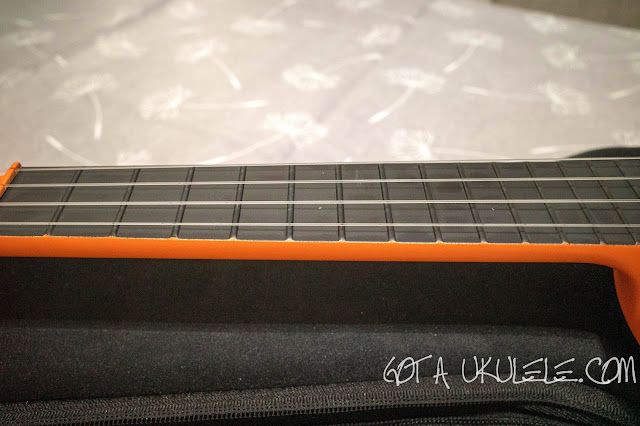 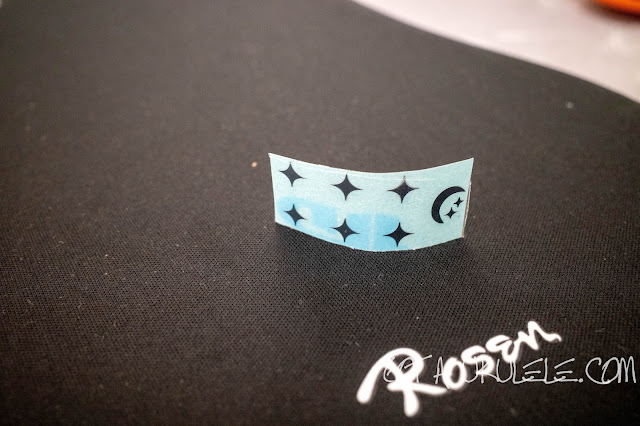 Beyond the integral nut is a rather cool looking asymmetric headstock which I like. Above the central hole is the Rosen logo applied in a 'greeting card sticker' style. Beware clip of on tuners! That I DON'T like.. 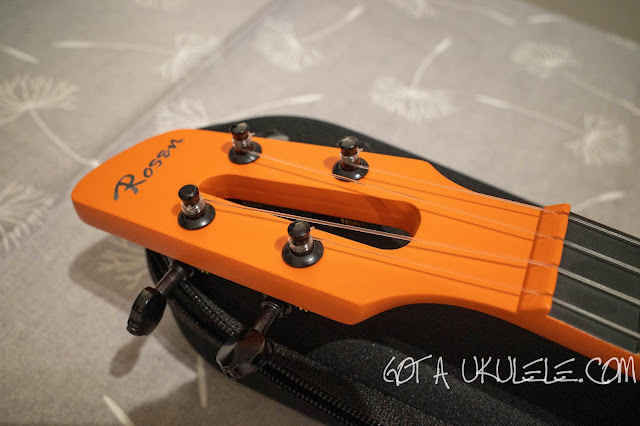 The tuners themselves look nice in matte black with gold gears. Sadly there is a lot of 'play' in the tuning though. That isn't to say they are not holding tune, but that you have to turn them quite a bit before the post turns either way. Very sloppy and frustrating to use. 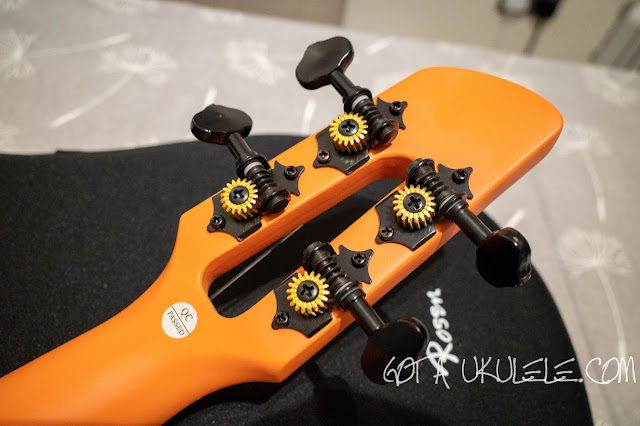 Completing the package is a case of 'let's throw the kitchen sink' at it. It comes with (DEEP BREATH).. A tuner, a capo, a cloth, a couple of strap buttons, a strap (one that hooks on the sound hole, not the strap buttons - I mean.. why?), picks, spare strings, a starter book and a case... oh and the fretboard stickers... The strings, incidentally are nylon so not my preference. But I have to focus on that case. You see, that's not just another semi hard pod case - it's pretty much identical to the one that comes with the Enya - even down to the straps and carry handle style. Oh come on!!! I tend to ignore the Amazon deals that throw everything they can at the extras - the included bits are usually low quality and designed to make you think you are getting more than you really are. I know Enya do it too, but I'm making the point that the fact you get a couple of extra 'bits' here over the Enya shouldn't really narrow the gap.  I'd put a value of a couple of dollars trade price on the lot of it. And the asking price comes in at, an also similar, $79.99 or £79.99 in the UK. Funny that... 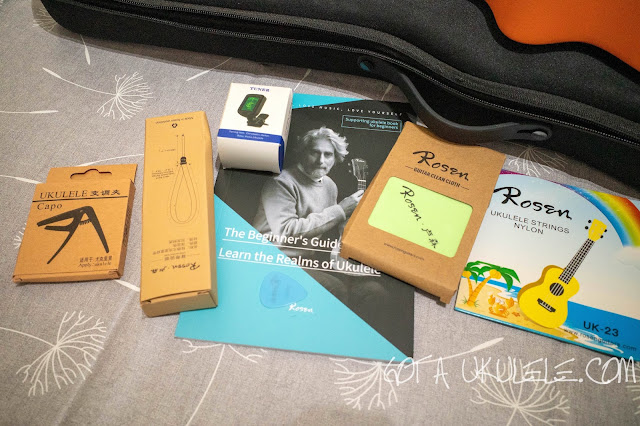 OK, so i've come across rather grumpy about this one because of the lazy mimicry, but to be fair it 'feels' well put together and whilst I don't think it has the stylish look of the Enya contours, it's hardly an ugly instrument. The finishing is not up to the Enya standard though. And comparing plastic ukuleles isn't like comparing luthier builds or even different tone woods. It's a plastic box and the Enya is a plastic box too. Admittedly the latter was a plastic box that I thought worked well on sound and I do wonder if there is much here that could go against that grain. Let's find out.
To hold it's similarly comfortable to the Enya, bar that matte finish that is almost a bit 'grippy'. Weight is heavier than the Enya at 655g, but it balances ok and the thin body is comfortable to cradle. The feel of the strings is horrible with a loose flabby feel meaning they are easy to bend. I suppose they are easily changed though.
The volume isn't great and neither is the sustain. Both are beaten by the Enya. I suspect the thicker body materials are having an impact here as it sounds strangled. It could also be the strings of course. 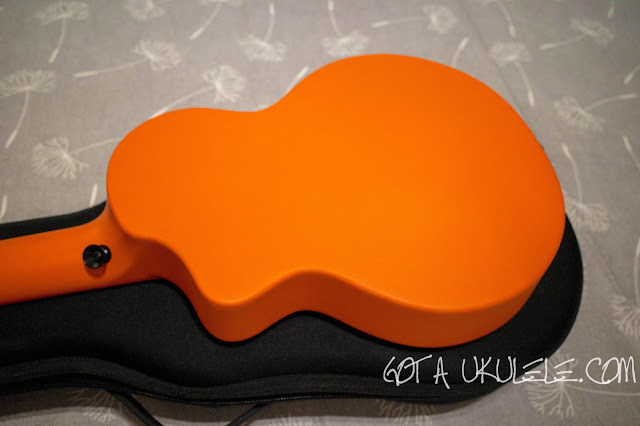 The tone is pretty flat to my ears whereas the Enya is crisp and much clearer. There's a muddiness to the sound on this one which I don't find particularly pleasing at all. OK, it works as a uke (kinda), but I don't find it particularly inspiring to strum. The notes all kind of melt together and it sounds like it's losing its footing.
Fingerpicking is better and it projects more played this way too, but the volume drops off significantly up the neck. Worse still, the intonation up the neck on the A string is just woeful. I have to be careful about claiming intonation issues are a bad point as it WILL vary between instruments and CAN be adjusted. But this is so out of whack it should never have been sold like this. That speaks for quality control. Sigh..
All in all I'm really not particularly impressed here. Sure, it's not a lot of money, and sure it looks ok, but it's not leagues ahead of the Enya option and is not really any cheaper either. If you are going with a concept that somebody else has already developed you should look to improve on it. This doesn't. This just comes across as 'bandwagonning'.. Add in the flabby strings, dodgy tuners, lack of position dots and poor volume and sustain and the question is - why would you choose this over the alternative?
I wouldn't, and I'd say - neither should you. Avoid.
UKULELE SPECS ROUNDUP
Model: Rosen Nova
Scale: Concert
Body: Single piece clamshell of plastic composite
Bridge: Integral, slot style
Saddle: Plastic, compensated
Spacing at saddle: 40mm
Finish: Coloured paint coated
Neck: Integral to body
Fingerboard: Plastic
Frets: 19, 14 to body. Moulded into board
Nut: Integral to fingerboard
Nut width: 35mm, 27mm G to A
Tuners: Black open gears
Weight: 655g
Extras: Pod case, strap, capo, tuner, cloth, starter book, spare strings, fretboard stickers
Country of origin: China
Price: £79.99
UKULELE PROS
Not unattractive to look at
Not expensive
Attractive headstock
UKULELE CONS
Rougher outer feel
No position dots
Very poor quality tuners
Flabby strings
Poor volume
Poor sustain
Intonation is poor
Flat lifeless tone
VERY derivative..
UKULELE SCORES
Looks - 8.5 out of 10
Fit and finish - 6 out of 10
Sound - 6 out of 10
Value for money - 7 out of 10
OVERALL UKULELE SCORE - 6.9 out of 10
UKULELE VIDEO REVIEW
© Barry Maz

GOT A UKULELE IS NOT PAID BY BRANDS OR SHOPS - YOUR KIND DONATIONS ARE WHAT KEEP THE SITE GOING! THANKS FOR YOUR HELP!

BUY ME A BEER!

BECOME A GOT A UKULELE PATREON

THANKS!
copyright Barry Maz and Got A Ukulele 2008-2021. This work is licensed under a Creative Commons Attribution-NonCommercial-NoDerivatives 4.0 International License.
Source: gotaukulele.com