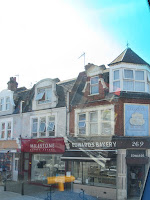 Willesden Bus Garage to Victoria Station
Thursday August 22 2019
Yes – we’ve been out of circulation for a while so it was time to well... circulate.

Our previous route – the 297 – had taken a very ‘round the houses approach’ to Willesden but the 52 Route is a much more straight forward experience, and one appeared as we approached the first stop.  We had no wait at all as we caught it just emerging from the bus garage, whose pedestrian entrance is almost the first thing we pass and is quite grandiose. Quite right too – public servants deserve to be honoured – through their pay and working conditions of course but also their environment , and in its time this would have been a grand place to come to work.

Like most routes the 52 threads its way along the quite narrow part that is Willesden High Street with many small individual shops, few that are part of chains.  Some are clearly run by newer arrivals to the area whereas others are well established –  Edwardes Bakeryfor example has obviously been around from the time shops announced their presence by painting the brickwork. However further along the wall the advert for a local estate agent is historical rather than actual. The housing is a real mixture from older taller properties with mansard/loft rooms, Thirties semis and some imposing blocks.  Jo, still impressed by her viewing of  'Years & Years' kept pointing out that once there were more frequent power cuts any dwelling above four floors would become a liability. 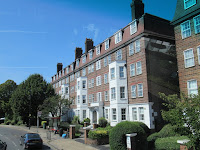 The bus turns off before Willesden Green’s very own underground station and heads through some more residential streets, bordering the popular Brondesbury Park, towards Kensal Rise.
Another cluster of shops round Kensal Rise station, down in its dip, are equally quirky with a (vegetarians beware) butcher’s shop window showing a how to carve up a cow… 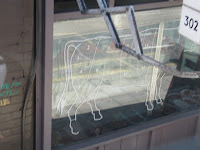 This bus route just tips briefly into Westminster before a much longer stint in ‘both halves’ (the more and less privileged) of Kensington & Chelsea. We were very aware that we were close to Grenfell Tower from several window posters, wall paintings and slogans. It must be unbearable to be a resident or relative and know the enquiry will probably take so long that anyone who could be blamed has moved on to evade responsibility 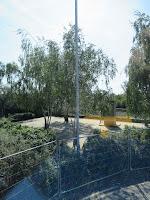 Like several routes after crossing the canal the 52 diverts into the Ladbroke Grove Sainsbury’s to pick up a considerable number of shoppers; we noticed that the Paddington Train Disaster memorial was fenced off, whether for repair or protection was not clear?
Once over the canal it was a matter of following almost the entire length of Ladbroke Grove with glimpses into the side streets of what had once been edgy and affordable Notting Hill and was now just pricy. With small front gardens many homes opt for the window box options and though we failed to capture it in a photo we were quite taken with a small scale house with two mini camper vans that adorned one window ledge along here.  The side roads offer impressive crescents and homes which took us to the corner of Notting Hill Gate. With a major redevelopment going on the corner we both remembered the previous landmark a large WH Smith’s and wondered where it had gone? 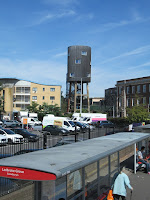 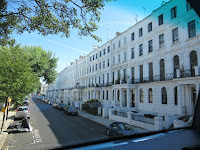 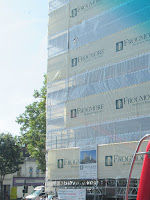 At this point we had a mutual guess as to whether the 52 (people who think we have every route imprinted on our minds from last time do not know our over cluttered and failing memories) opts for the northerly edge of Hyde Park or heads south – I was wrong in opting for the former as we curled round and headed down Kensington Church Street with its ever so discreet antique shops. I was a bit intrigued with Reindeer Antiques – does Santa really pension off his animal employees? Apparently they specialise in Georgian furniture. 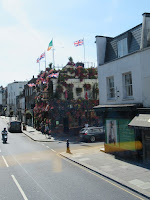 From previous trips down this way we knew the Churchill Arms would be in full OTT bloom and indeed the petunias were overwhelming. ‘A good year for petunias’ said Jo but she says that every year; make of that what you will. 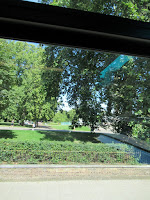 Our journey along Kensington High Street was less painful than sometimes and soon we were passing along Kensington Gardens and Hyde Park – interestingly the trees that edge the park work well as a barrier as it is quite difficult to peer or photograph across the park. The exception of course is for the Albert Memorial that stands proud and very visible from all sides. 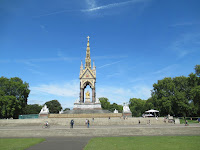 On the non-park side there are some public buildings including the Royal Geographical Society - now there’s a subject that has had to change with the times, even if its building dates back to earlier origins.  Livingstone looks quite comfortable in his niche and thus avoids one of the hazards of public statuary – anointment by pigeon. 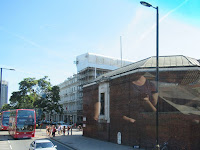 Never a cheap area, the luxury factor increases towards Knightsbridge where the hotels and luxury flats and department stores proliferate interspersed with some high end jewellers. 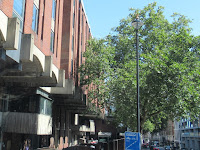 There is also a fair amount of building ongoing and in part traffic disruptive – huge cranes tower behind a façade that the developers are clearly keen to retain, and almost at Hyde Park Corner, on the site of the old St George’s Hospital (Knightsbridge ‘s loss is very much Tooting’s gain) the Peninsula site is making such slow progress we were wondering if the Hong Kong developers might have other things on their minds currently? 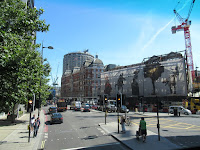 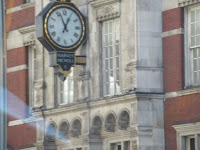 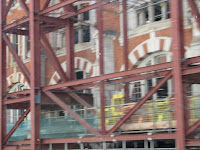 The 52 does an almost complete circuit of Wellington Arch allowing us to admire David’s rear (the Artillery memorial) but we also noted some very neatly clipped hedges and trees that we thought were new? 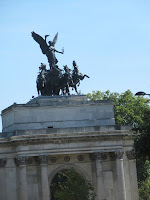 Debating whether the Queen had found some spare cash down the side of the sofas (the topiary is between the Royal Parks and Buckingham Palace Gardens) we proceeded quite swiftly down to Victoria – and the 52 clearly has enough status to be allowed into what remains of Victoria bus station and is not banished to behind the back platforms; it overshot its predicted time of 1 hour by 5 minutes but was a steady pleasure throughout. 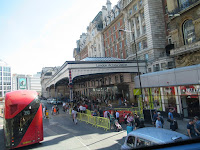