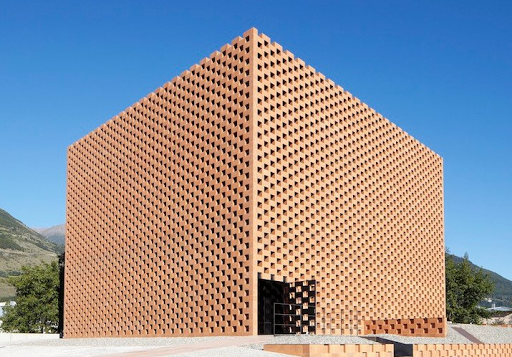 An Italian whisky! This is a first for me, and something tells me it's going to be an interesting one... 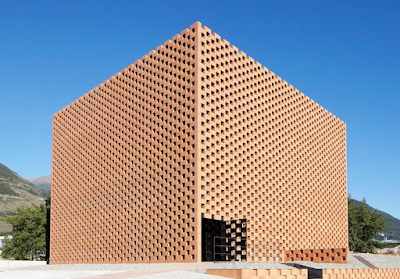 Puni Distillery is the only whisky distillery in Italy, located near the Swiss border in the Italian alpine region in the far north of the country, around four hour's drive north-east of Milan. This family-owned distillery is named after the nearby Puni River, and is housed in the very modern cube-shaped building pictured above (no whitewashed stone here!), which was built in 2010 with production commencing in 2012. But there seem to be a few points of difference in the whisky itself that are a little different from the norm. Puni's whisky is made from a mix of malted barley, malted rye and malted wheat. Yes, rye and wheat can also be malted, but the addition of these two other grains (whether malted or 'green') make this a grain whisky, not a malt whisky, by the Scottish regulations. Italy is not in Scotland of course, and the European Union whisky regulations only state that whisky must be "made from malted cereal grains, with or without whole grains of other cereals" which is very vague, and there is no provision for terms like single malt, malt whisky or grain whisky in their definitions. Puni have chosen to call their product "Italian Malt Whisky", which is obviously fine by the EU definitions, and all of the grain used has been malted, so it does make sense.

The majority of the EU whisky definitions do match those of the Scotch Whisky Association, including the minimum 3 year age and 40% ABV bottling strength, the maximum 94.8% ABV distillation strength and 700-litre cask size, and E150a caramel colouring being the only permitted additive. But those casks are only required to be "wooden", oak is not specified like it is in Scotland and the United States. Many countries around the world have ambiguities like this - and often more - in their definitions and regulations, including Australia & Japan. But many of the quality international producers do choose to follow the Scotch whisky regulations, and it'd be nice to get everyone on a more even playing field, wouldn't it? There's no questioning the massive effect that the use of different grains make to a whisky, with spirits predominantly distilled from rye, wheat, corn and barley being markedly different from one another. I must admit the use of different wood types for whisky maturation would be an interesting thing to explore, and a few "new world" distilleries have started doing just that. But there are already hundreds of different oak species out there, so there's already plenty of room for more exploration and experimentation in that area than seems to be happening at the moment.

Back to the subject at hand. Two of those three different malted grains, the rye and wheat, are sourced locally from northern Italy, while the barley is apparently imported from nearby Austria. The local South Tyrol region was actually part of Austria prior to World War II, to the point where the majority of the population have Austrian names and speak a mix of Italian and Austrian. Aside from the grains used production at Puni is otherwise traditional, being mashed on-site, using wooden washbacks for fermentation and being double distilled in Scottish-built copper pot stills that were built & installed by Forsyths in Speyside. Puni use a number of different cask types for maturation, from virgin oak and ex-bourbon to Marsala and Pinot wine, to PX sherry and refill ex-Islay whisky casks, and some of those casks are actually matured underground in re-purposed WWII-era bunkers. The distillery also benefits from the wide variances in the local climate, from warm temperatures in the mid-twenties in summer to below freezing in winter, which helps give the maturating casks a hurry-up.

The Puni expression we're looking at today is Nero (Italian for "black"), which refers to this whisky being matured in casks that previously held Pinot Nero red wine, which is the Italian term for Pinot Noir, sourced from local wineries. This expression did win the World Whiskies Award for best Italian single malt in 2017, but let's remember that there is only one Italian whisky distillery, and by the most widely-accepted definition of the term this isn't exactly single malt, so let's not get too caught up in that. This sort of situation does highlight the frivolity of some of these international whisky awards, particularly when they're very effective marketing exercises for the entrants and subsequently the awards themselves. Puni Nero is an age-stated (which should be commended) 3-year old whisky bottled at 43% ABV, and is non-chill filtered and naturally coloured. This is the 2016 bottling which is still readily available in Australia for around $140 AUD, with only 3000 bottles released. Let's give it a go... 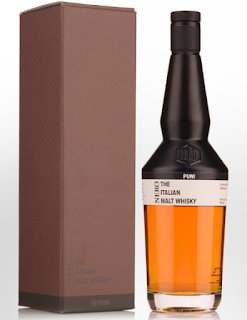 Texture: Light-medium weight, but lightly flavoured. Slight touch of heat on the back end.

Taste: Spicy, quite rye forward here. Toasted grain and a little yeasty rye bread. More gamy and musty red grapes, but much lighter here than it was on the nose. A little powdery dark chocolate as well.

Finish: Short & light. Flashes of coconut and chocolate again, but the rye spices are still the main player. Fades quite quickly with a little musty grape and a touch of prickly heat on the tongue.

Notes: A pleasant drop, night and light and fruity, with a refreshing spice to it. And that's coming from someone who doesn't exactly love grain whisky in most cases. I wonder what proportion of each grain were used in this one? This Puni would make for a good summer's day dram I'd say, and it'll be to the liking of fans of spicy red wines as well. It's a little unfamiliar to the malt drinker, but that's not a criticism. Variety is the spice of life, after all.

Overall it's a good showing from a young and very "new world" distillery, and it's well worth a shot when you're looking for something a little lighter and a little refreshing.