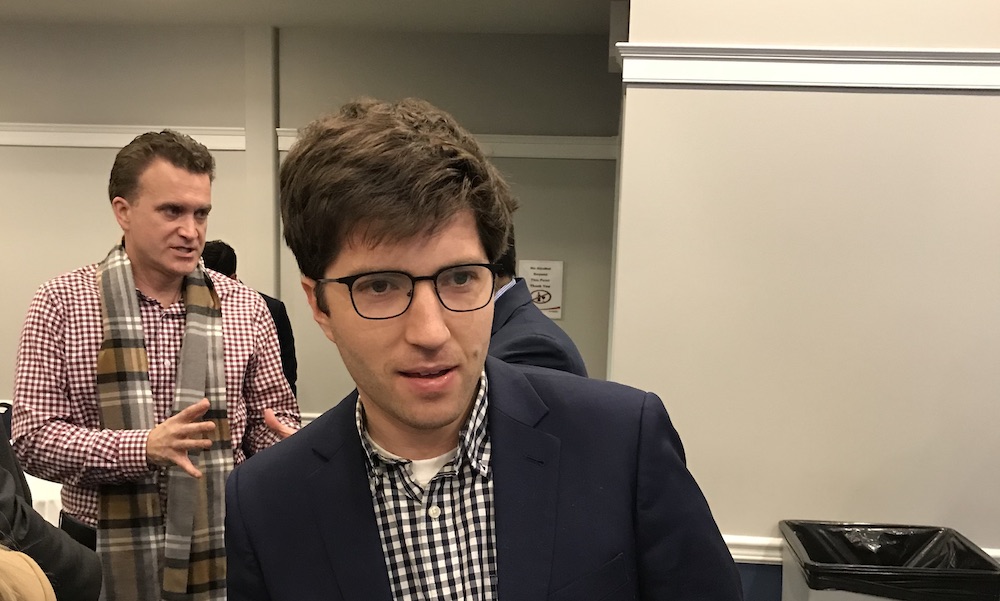 Regardless of exactly how Garnett Genuis’s Vancouver bus advertisement asking how there can be too many children was paid for, the Sherwood Park-Fort Saskatchewan MP well known for his vocal opposition to reproductive rights and the Conservative Party of Canada should both have some explaining to do.

Mr. Genuis boasted about the appearance of the ad in a tweet yesterday, which was the first most people around his riding just east of Edmonton had heard about it.

One of Mr. Genuis’s riding association’s advertisements on a Vancouver bus (Photo: Twitter).

The ad, featuring a photo of three adorable toddlers and an infant, quotes Mother Theresa asking, “How can there be too many children? That is like saying there are too many flowers.”

Critics immediately jumped on the ads arguing their intent was to attack the right of Canadian women to reproductive freedom.

For his part, the 33-year-old MP offered a different explanation, claiming to be countering a “false population control narrative” and standing up for families.

According to the Mr. Genuis, well known for his opposition to reproductive rights, the advertisement was just countering a message that he says appeared on earlier bus advertisements seen in Vancouver. He has also argued that calls to restrict family size are often motivated by racism.

But as one blunt response to that claim put it: “‘Countering the false population control narrative’? Do you think you’re being clever? Everyone knows these are pro-life ads with the intended effect to reduce women’s reproductive rights.”

What really raised eyebrows in Mr. Genuis’s riding and beyond was the statement, clearly visible on the ad, that it was “sponsored by contributors to the Sherwood Park-Fort Saskatchewan Conservative Riding Association.”

This had B.C. residents wondering, “Why is the Sherwood Park-Fort Saskatchewan (Alberta) Conservative Riding Association sponsoring ads on buses in Vancouver, B.C.?” Good question. Maybe its members think the West Coast metropolis is too liberal.

Now, the funding explanation in the ad is somewhat ambiguous, probably intentionally. Does it mean the ads were paid for directly with tax-deductible political donations? Or merely that they were paid for by people who also happened to be contributors to Mr. Genuis’s election campaign?

Certainly, these natural questions gave Mr. Genuis an opportunity to provide a link to his bloviations on the topic in the Post Millennial, the far-right website that appears to exist largely to attack Justin Trudeau, the Liberal government in Ottawa, and ride social conservative hobbyhorses. This has earned it the love of politicians like Andrew Scheer, the former Conservative Party of Canada leader who touted it to supporters after losing last year’s federal election.

In another tweet, Mr. Genuis said “our response was fully crowd-funded.” If so, though, why was the constituency association even mentioned?

This suggests, at least, that Mr. Genuis, whose name is not spelled genius, was trying to be clever.

Remember, about this time last year he was in hot water for raising the abortion issue, along with Alberta separatism, in a flyer poll mailed to his constituents at a time when the Conservatives then led by Mr. Scheer kept insisting the issue was — nudge, nudge, wink, wink — settled.

Perhaps the funding questions about the ad could have been asked back on Oct. 8, when Mr. Genuis clearly signalled his intentions in the House of Commons. “My riding association is fighting back,” he told inattentive MPs and Press Gallery members that day. “We are taking out ads on buses in Vancouver…”

Alas, no one thought to ask, “Say what? How are you paying for these ads? Are any House of Commons funds or resources being used to raise the money? How was the pitch delivered to CPC donors in the riding? Is buying ads in Vancouver appropriate behaviour for an Alberta MP?” And so on.

Oh well, the days are long gone when Alberta news operations kept their own reporters in nation’s capital to keep an eye on the province’s MPs. Why bother? They’re mostly all on the same team anyway.

Likewise, since the Conservative Party of Canada has a new leader who says he’s trying to increase the size of the party’s ever more restrictive tent, this is bound to raise the issue again of where it actually stands on reproductive rights.

Erin O’Toole has billed himself as a pro-choice MP — although his voting record is somewhat mixed on the issue. He’s also said he wants to ensure the Conservative Party reflects the interests of more Canadians than just the social conservatives and market fundamentalists who have increasingly dominated it in recent years.

Mr. Genuis’s gambit into West Coast advertising raises the question of just how serious Mr. O’Toole is about this.

Is he going to make excuses for MPs like Mr. Genuis, singularly focussed on social conservative issues and inclined to get up to embarrassing nonsense like this dog-whistling Vancouver bus ad?

If so, that sounds like an excellent way for the Conservatives to alienate voters in Canada’s largest cities.