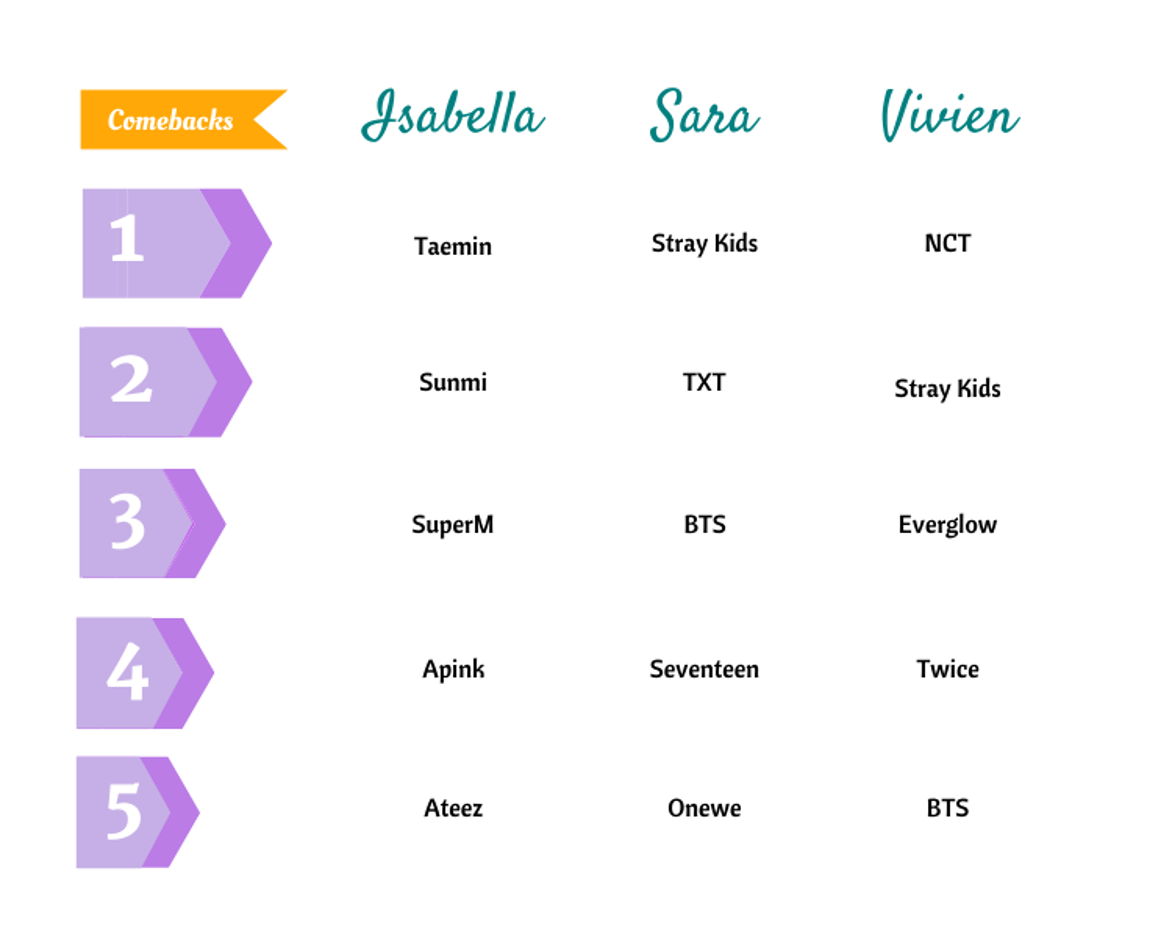 SB End-of-Year Review, 2020: Comebacks Forging Ahead in a Standstill Year

It’s the end of a long and strange year, spent in the confines of our homes and the company of our devices. The dazzling world of K-pop has been a more alluring form of escapism than ever, and so the machine has continued to grind even as we endure a global pandemic. Somehow, we have seen more breakthroughs and successful growth narratives than usual; Isabella, Sara and Vivien discuss the best comebacks to come out of this rollercoaster of a year.

Sara: When I was brainstorming my list, Stray Kids took the number one spot easily. The funky bassline of “Back Door” pulls me into the song every single time, and I appreciate the sparse but impactful layering of the other instruments. I also love the effects of the door creaking open or slamming shut and the outro of this track. Stray Kids brings listeners on a journey in those three minutes, which is captured further in their choreography. Once I saw the full video, I couldn’t stop watching! They open, close, and bang on doors, and I love the sharp movements they make as the bass drops.

Stray Kids appears on your list too, Vivien. What made their comeback stand out for you?

Vivien: “Back Door” was my favourite title track from them yet! I’d enjoyed “Hellevator” and “Miroh”, but “God’s Menu” and “Back Door” saw Stray Kids come into their own, in terms of musical style and how they carry themselves as fully fledged artists. Both were catchy, polished, and refreshingly different, with production that showed they now understand how noise can be used to make music, without it becoming noise. Along with excellent MVs, these made me sit up and take notice of a group I’d felt neutral about for years, and I’m looking forward to seeing where they take things next!

I see their rivals and fellow Kingdom participants Ateez made your list, Isabella! What tipped the scale?

Isabella: Like you with Stray Kids, Vivien, I’d felt mostly non-committal about Ateez — that is, until they released the brilliant “Answer”. This comeback incorporates popular (and somewhat overdone) genres like hip-hop and EDM, but with a sense of bombast that’s completely unique to Ateez. This clear vision is largely thanks to the fact that, unlike most K-pop groups, Ateez works almost entirely with a single team of producers (dubbed Edenary). True to form, Ateez kept the quality high with Zero: Fever pt. 1. I’m excited to see where this talented group, aided by their equally talented producers, will go in the future!

Like Ateez, TXT are heralded as 4th-generation A-listers. Sara, what stood out to you about TXT’s comeback?

Sara: Honestly, TXT did not stand out to me until their comeback with minisode1: Blue Hour. Watching “Blue Hour” (and seeing Yeonjun in a pink mullet?) inspired me to do a deep dive into their discography, and I became intrigued with their exploration of youth. Their sound is more heavily produced, but I think they experiment enough that it doesn’t bog down their music for me. Their balance of light and dark drew me in when I needed it most, plus the dance break of “Blue Hour” was too much fun not to include them on my list.

BTS is the other artist we share, Vivien! What made TXT’s labelmates catch your eye?

Vivien: While they had some amazing achievements this year, it was mainly because they addressed a gradual decline in music quality with their album BE. As a longtime ARMY, Map of the Soul: 7 was my least favourite project yet, with a few exceptions including “Black Swan”. I’d noticed a staggering number of non-Korean writers, and while that’s not a problem in itself, it resulted in generic Westernised music that masked BTS’ core authentic sound. Maybe they felt this too, because with BE they took everything into their own hands, and while it’s still far from my favourite album, there’s a flicker of Bangtan’s old soul there, the heart and passion for music I found so compelling in 2014. How about you, Sara?

Sara: I felt similarly about Map of the Soul: 7! Some tracks I keep coming back to, like “On” and its choreography, but otherwise, I couldn’t grasp the soul of this album (no pun intended). BE seemed more whole to me, and part of that impression came from their incredibly visual lyrics. I also appreciated how active the members were in the creative process for this album, from filming the MV, to fashion, to developing the concept photos. There are few concept photos that consistently draw my attention, but these left me thinking about the overarching idea of this album, how the images visually expressed their lyrics, especially for “Fly To My Room,” and how it all connects to our COVID-19 world.

Like BTS on my list, SuperM is third on yours, Isabella. What did you think about their comeback?

Isabella: My initial review of “One” was already glowing, but over time, I’ve only come to appreciate this comeback even more! SuperM’s 2020 output has been consistently invigorating, sporting the sort of campiness that hearkens back to K-pop’s 2nd generation. As you said earlier, emotional albums like BE are a gentle comfort during this global pandemic; however, I’d argue that because brash excess à la “One” provides a fun escape from these trying times, it’s just as necessary. I also love that the MV stitches together myriad references to Shinee, Exo, NCT 127, and WayV’s past videos, creating a Frankenstein laden with treasures.

Speaking of labelmates, Vivien, I see NCT topped your ranking. (When making mine, it pained me to leave out NCT 127’s “Kick It”.) What impressed you about NCT’s comeback?

Vivien: Well, I went from WayV fan / casual NCT listener to hardcore OT21 (now 23) NCTzen in the space of about two months! “Kick It”, “Ridin’”, “Punch” and “Turn Back Time” were great individual comebacks, so by the time NCT 2020 was revealed, momentum was at an all-time high. SM capitalised on this with the excellent album, Resonance, but personally, WayV’s Awaken The World beats it and every other album I’ve heard this year. More generally, their sound is one of few I find truly innovative right now, and I reckon SM’s best songs are currently being channelled into this group. They’ll rise even higher in 2021, and I’ll be sitting in the front seat!

NCT and Seventeen are good friends; what got them onto your list, Sara?

Sara: I reviewed Seventeen’s “Home;run” in October, and I absolutely loved it! It struck me as very Seventeen — but with an additional level of sophistication. This group never fails to cheer me up, and in this delightful MV they brought an intriguing narrative full of mischief, their characteristic energetic choreography, and a message full of heart. Seventeen didn’t make it higher on my list (if Onewe had come back earlier, they would’ve occupied Seventeen’s position) because none of the songs on ; [Semicolon] really stood out to me. “Home;run”, “Light a Flame” and “Do Re Mi” sparked a bit of interest, but otherwise, I was more attached to the title track and MV.

Taemin was another fall comeback that drew my attention but didn’t stick enough to make my list. Tell us why Taemin took your number one spot, Isabella!

Isabella: We all know that Taemin is one of a kind in K-pop: a distinctive dancer with equally strong vocals, tackling smooth dance pop as well as far more experimental material. Yet, even compared to his impressive track record, “Criminal” still manages to reach new heights. The understated and beguiling chorus is one of the strongest of 2020, the MV absolutely stuns with its rich imagery, the choreography possesses a completely unique flair, and the accompanying album delves into a newly vulnerable side of Taemin. But “Criminal”’s strongest asset is Taemin himself; his sheer magnetism and androgynous voice transform a solid comeback into something truly stellar.

Speaking of androgyny, I’ve just realized that we haven’t spoken about a single girl group yet! Well, let’s rectify that — Vivien, I see Everglow made it to your third slot. What did you find so compelling about them?

Vivien: I loved Everglow’s “La Di Da”, along with their mini-album -77.82X-78.29! I’ve been interested in them since “Bon Bon Chocolat”, but their title tracks afterwards didn’t quite match its quality and trendiness. That changed with “La Di Da” — it’s one of their best title tracks to date! It’s a fun, catchy song with sparkling production and a beautiful MV, and importantly they were also just a step ahead of the curve in bringing the Western synthwave trend — a specific branch of the retro revival resurrected by The Weeknd’s “Blinding Lights” and Dua Lipa’s “Physical” — to the mainstream K-pop market.

Just a month later, Twice returned with a similarly synthwave-inspired track, “I Can’t Stop Me”. I liked this too, but it didn’t pack as much of a black-winged-eyeliner, glitter-and-sequins punch as “La Di Da”, and by that time the synthwave surprise was already feeling less novel. Still, the accompanying full-length Eyes Wide Open was a strong album that encapsulated Twice’s growth over the past few years, with a consistent theme of female empowerment. Twice are role models to girls all around the world, so I enjoyed seeing them mature from the helpless, passive female protagonist they first embodied in “Like Ooh-Ahh” to something more modern and real.

Sunmi also had some excellent retro-inspired songs this year; what put her on your list, Isabella?

Isabella: This year’s disco / synthwave trend has been truly glorious! K-pop has delivered hit after hit — notable examples include Gfriend’s “Mago” and Yukika’s “Soul Lady”, as well as the songs you just mentioned, Vivien. I’ve highlighted Sunmi’s “Pporappippam”, because it’s so refreshing to see a K-pop legend revisit her roots. As a former Wonder Girls member, Sunmi already has years of experience with the retro concept — with “Pporappippam”, she’s not just joining a 2020 trend, but also reaching back to her past. Sunmi’s collab with J.Y. Park, “When We Disco”, only continues the retro fun!

In contrast to Sunmi, my fourth pick, Apink, spent the year taking a step forward in their musical journey. “Dumhdurum” is their latest comeback with a harder-edged sound, as the group shifts away from their earlier “innocent” image. The central synth loop of “Dumhdurum” is one of the catchiest moments of the year. Most impressive, though, is the fact that Apink has executed this stylistic maturation with such aplomb.

And that brings us to Onewe, the last artist on our lists. Sara, what appealed to you about their comeback?

Sara: Like what you saw in Apink’s comeback, Onewe’s album, Memory : Illusion, proved that they are only moving forward as a band. While “Regulus” holds the crown for my favorite Onewe song, “Trauma (Aquarium)” is next in line because of its strong central image, the story in the lyrics, and the musical talent expressed in this song. I enjoyed the band’s first full-length album, ONE, and I thought joining their previously released tracks together clearly showcases their journey as Onewe since debuting with “Reminiscence about All.”

However, I loved the narrative of Memory : Illusion even more. They approach a break-up by remembering moments through powerful imagery, such as an aquarium / the sea, a book, and an eraser. The overarching narrative allows the three songs to flow from one to another. Plus, the increase in drum and guitar solos lets listeners get more of a taste of what Harin and Kanghyun can do, since their voices are seldom present.

2020 hasn’t been the best year, but I think we can agree that the stream of excellent comebacks has helped make it more bearable! The resilience of the industry in the face of huge setbacks has been quite impressive, and with K-pop simultaneously entering a historic era of global popularity, 2021 looks to be as interesting a year as the last.

SB End-of-Year Review, 2020: Comebacks Forging Ahead in a Standstill Year