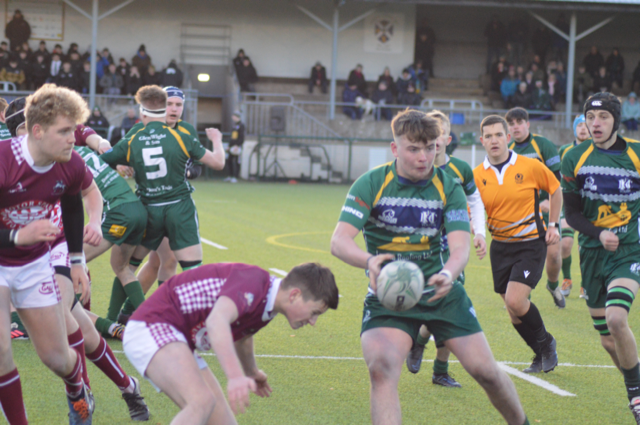 Schools/Youth Rugby: Hawick march on with win over Gala Wanderers

HAWICK YOUTH took another step closer to winning the Borders Semi Junior League title by defeating their close rivals, Gala Wanderers, 25-14 on the 3G pitch at the Volunteer Park in last Saturday’s top-of-the-table clash.  The result, which will give Hawick a confidence lift ahead of the National Cup quarter-finals in January, means they maintain their undefeated record in the league.

In a polished performance of powerful and focussed forward play, Hawick Youth scored four tries, two before the interval by their pacy winger Finlay Douglas that helped his side to a 13-0 lead, and two after the break from their impressive back row players, Ruaidhri Forbes and Hughie Donaldson, the other Hawick points coming from the boot of stand-off Owain Gray with a penalty and a conversion.

“This was a really important league game for both teams so we’re especially pleased with the commitment, discipline and performance of our whole squad,” said Hawick’s team manager Paul McDonald.  “Gala pushed us all the way but I think our line-speed and the pace of our backline made the difference.”

For Gala, who were at odds with the referee’s interpretation of the breakdown, the result put the brakes on a run of three victories.  “We gave away far too many penalties and we made handling errors,” opined head coach Tom Weir.

The visitors, who won the second half 14-12, looked more committed after the break and were rewarded with tries from replacement Logan Kerr and prop Ben Young, both converted by stand-off Russell Kerr, who was one of Gala’s more impressive performers.

Elsewhere in the Borders Semi Junior League, there was a string of cancellations.

Meanwhile, in the National Youth Conference, the much awaited match between leaders Mackie and second placed Boroughmuir was postponed because of travel concerns following the devastation caused by Storm Arwen.

Boroughmuir’s head coach, Scott Anderson reflected: “It seemed the best decision with the weather warnings and Stonehaven having been in the news, too, on the Friday. The game is being rescheduled for weekend of 11th December. It does mean our friendly that was scheduled for Friday 10th at Myreside against George Watsons College will hopefully get rearranged too.”

Boroughmuir face GHA this week in a game that Anderson knows will be a challenge for his side. “They have had some good results this season so we will need to continue to be on top of our game,” he emphasised

At Millbrae, the match between Ayr and Stirling County, which doubled as a Cup play-off,  did go ahead and resulted in a 41-14 win for County, whose tries were scored by hooker Lachlan Forsyth (2), centre Logan Jarvie, wings Murray Shedden and Ross Wells, and stand-off Ben Gibson. Centre Murray Johnston kicked four conversions and there was a penalty goal from full-back David Kyle.

Commenting on what was County’s best win this season, Stewart Milne, the Academy manager at Bridgehaugh, said: “We’ve been fortunate to get some of the squad back to fitness and a lot of the hard work at training is starting to come to fruition. Lots still to improve but the players are working really well. The match was very competitive, very well refereed and we’re very pleased to be moving into the cup quarter finals in the New Year.”

In schools rugby, the effects of Storm Arwen posed a challenge to the fixture programme, but remarkably only one game in the East Conference A was forced to be cancelled, the much anticipated clash between Stewart’s-Melville College and Dollar Academy at Inverleith.  The rearranged date for this match is 11th December.

At Colinton, Merchiston were much too strong for George Heriot’s School in their 61-0 win over the Goldenacre side. Merchiston’s tries came from Olly Palmer, Alex Callaway, Ben Riley, Lachlan Ferguson, Luke Mcarroll, Tom Currie (2), Torin McGregor and Glen Crawford, six of them converted by Matthew DeVilliers and two by Drew McCall Smith.

“We have been working very hard in training on our decision-making in attack, so we were pleased to create so many opportunities and execute whilst under pressure,” stated Roddy Deans, the Merchiston head coach. He added: “We have been building each week and are very excited for the challenge against George Watsons College next week. In all my experiences this game always provides a tough challenge and a close affair, so we expect nothing else this Saturday”.

Watson’s will go into this clash on the back of a 38-6 win against Edinburgh Academy at Newfield where their tries came from a brace apiece by wings Alistair Holmes and David Cathcart, plus single contributions from scrum-half Adam Simmers and full back Jack Brown, who also landed four conversion kicks.

Looking ahead to the match against Merchiston at Myreside this Saturday, Watson’s coach Mike Ker said: “This week is a massive game. We want to finish the conference well, keep the momentum of the last few weeks going and continue to play a wide attacking brand. However, we realise we will be underdogs against a well coached and physical [Merchiston] outfit who have performed well this year in the conference.

“We have a few concerns about our team, not least to our scrum-half Conor McAlpine who didn’t play against Edinburgh Academy. He’s a stand-out performer at schoolboy rugby who is on the right path for bigger and better things. We hope he will make it, but if not he has a very able deputy in Adam Simmers who had a strong game at the weekend.”

Edinburgh Academy’s director of rugby, Chris Martin, took positives from the way his reduced squad performed against a strong Watson’s team. He said: “We actually had only fifteen players available due to injuries, so the boys who stepped up were absolutely superb. I was particularly impressed with the maturity that some of our younger players showed and especially Charlie Lamond at inside centre”.

In the other East Conference A match played, Strathallan showed power and skill in winning 55-14 against Fettes College at Forgandinny. Strathallan will face a much tougher test this weekend when they face Stewart’s-Melville College. Fettes meanwhile are at home to Edinburgh Academy, while Dollar will want to show that a week off has not affected them when they play George Heriot’s School.

Colin Campbell ready to take on Scottish rugby with Macron

The post Schools/Youth Rugby: Hawick march on with win over Gala Wanderers appeared first on The Offside Line.

Schools/Youth Rugby: Hawick march on with win over Gala Wanderers