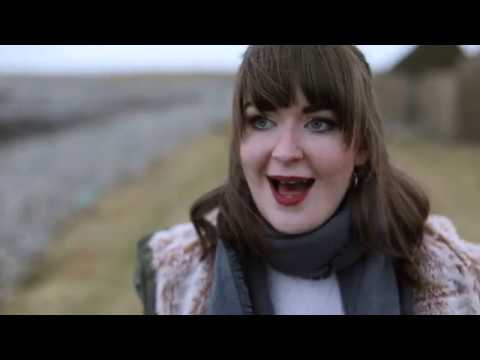 Beat the winter blues with some uplifting Scottish traditional music! Music has been at the heart of Scottish culture for centuries. Never more than now has there been a need to support the talented Scottish musicians that are part of the unique and vibrant traditional folk music scene.

So put on your dancing shoes and get ready for some foot-stomping tunes as you travel through Scotland (virtually) to the sounds of the most exciting contemporary folk musicians and singers.

Close your eyes and make your great ‘Hebridean’ escape. Imagine relaxing by crystal-clear waters on remote golden sandy beaches of the Outer Hebrides with the stunning songs of Josie Duncan, a young folk singer from the Isle of Lewis. Having been immersed in Glasgow’s traditional music scene, her beautiful delicate voice is equally at home in Gaelic, Scots or English.

Her award-winning album The Morning Tempest with guitarist Pablo Lafuente combines old ballads with Gaelic puirt a beul and original compositions. Now working on her solo album, you can join Josie Duncan’s ‘Demo Club’ and hear how it progresses from a voice memo to a fully produced track. You can even commission a song or two – the perfect gift for Christmas!

Want to discover the music of Scotland’s Gaelic Islands? You will love the music of multi-award winning Gaelic singers Mischa Macpherson from Lewis,  Julie Fowlis from North Uist, or Kathleen McInnes from South Uist, all equally unique and stunning. For something a bit different, check out Stornoway sensation Peat and Diesel.

Take a musical journey to the Outdoor Capital of the UK through the music of Ewen Henderson, nicknamed ‘the Musical Prince of Lochaber’. Ewen has been steeped in the traditional music and Gaelic culture of Lochaber from an early age and has a keen interest in the unique history and the Gaelic language and culture of his native area.

His brilliant debut solo album, Steall, features his multifaceted musical talents, from fiddle and Highland pipes to songs inspired by the beautiful landscapes of the West Highlands.

Feel like a “West coaster” at heart? Tap your feet to the cheerful Highland tunes of Iain MacFarlane & Ingrid Henderson (also members of the Glenfinnan Ceilidh Band), energetic duo Eilidh Shaw & Ross Martin from Arisaig, or Gaelic Supergroup Dàimph. Celebrate the unique culture of the Highlands at the Blas Festival online on 20-30 November with an impressive line up of  Scotland’s best loved traditional musicians and singers.

Find your space and refresh your senses in Orkney through the music of Fara. Blending rich harmonies, energetic fiddle playing and driving piano, the Orcadian quartet creates a fiery sound strongly rooted in their island upbringing.

Over the last five years, Fara have toured around the world. This year, they bring you The Orkney series, travelling around the islands and performing Orcadian tunes in the very places that inspired their names. Explore The Gloup & Mull Head Nature Reserve listening to ‘The Moul Head’ by Orcadian composer Davie Eunson or take a stroll to the spectacular viewpoint of ‘Brinkie’s Brae’ in Stromness, made famous by Ally Windwick’s tune of the same name. Don’t miss their debut album Cross the Line and excellent follow up Times From Times Fall.

Hooked on Orkney? Then you will be amazed by the Orkney folk music scene, with award-winning songwriter and guitar player Kris Drever, the foot stomping musicians of The Chair, the high-spirited quartet Gnoss, or the sensational twin sisters duo The Wrigley Sisters.

Did you know that Glasgow is a UNESCO City of Music? The city truly lives and breathes music. Upcoming neo-trad trio Project Smok brings together award-winning musicians Ali Levack (pipes & whistles), Pablo Lafuente (guitar) and Ewan Baird (bodhrán). They formed in 2017 rising from Glasgow’s vibrant live music scene and have been pushing the boundaries between the contemporary and the traditional to create something truly innovative.

Check out the fresh and imaginative music of  Kinnaris Quintet, the fiery tunes of Talisk, or the powerful vocals of Siobhan Miller. Don’t miss Celtic Connections festival, the UK’s premier celebration of Celtic music going online on 15 January – 2 February 2021.

Connect with the nature of the Cairngorms National Park through the music of Jenny Sturgeon. This talented singer-songwriter takes her inspiration in the wonders of the natural world. Her solo album The Living Mountain was inspired by Nan Shepherd’s 1940s mountain memoir of the same name and Jenny’s experience walking in the Cairngorms National Park. The book was described as “the finest book ever written on nature and landscape”.

Through soothing melodies and stunning lyrics, Jenny explores her own personal connection with nature as well as Nans philosophy of simply “being” in the wild. The record also features the Cairngorms natural sounds, from singing birds and roaring stags to wind and drifting snow.

Check out her Living Mountain Conversations podcast with artists, writers and ecologists she encountered making the album and support The Living Mountain grove with Scottish conservation charity Trees for Life.

Check out the superb flute compositions of Hamish Napier from Grantown on Spey, the unique vocals of acclaimed singer Rachel Sermanni from Carrbridge or the genius fiddle strathpeys from Charlie Mckerron of Capercaillie fame.

Get transported to the atmospheric Isle of Skye, listening to Brìghde Chaimbeul (a Scottish Gaelic name pronounced Bree-chu Campbell).

At only 20 years old, the native Gaelic speaker from Skye is a virtuoso of the Scottish smallpipes. She already has 13 years of piping behind her and won multiple awards. Her debut album The Reeling will take you to Skye, mixing the peculiar, beautiful sound of the small pipes with a contemporary feel. Check out her bandcamp channel and social media for new releases, merchandise, workshops and virtual gigs.

Listen to legendary Scottish trailblazers Peatbog Faeries, electronic/trad fusion band Niteworks or renowned Gaelic singer Arthur Cormack. On 26-28 November, you’re in for a treat at the SEALL Festival of Small Halls, bringing big music to small halls around the Isles of Skye and Raasay, which you can stream from the comfort of your own living room!

Nowhere else in Scotland is the folk music scene as unique as in Shetland. The Shetland fiddling style is bouncy and lively and as close in spirit to Scandinavia as to Scotland.

Shetland fiddle player Ross Couper has been dazzling audiences around the world and you you can experience his infectious folk melodies, explosive fiddle grooves and fiery driving rhythms  from the comfort of your sofa. His energetic playing is at the heart of some of the greatest folk bands, including the mighty Peatbog Faeries and award-wining duo Ross and Tom.

Keep an eye on his social channels this winter for his debut album An Den Day Made Tae (out on 11 December) with his brother Ryan on guitar, virtual gigs, trad sessions, fiddle tuition, Shetland tunes book and more.

Check out brilliant fiddler Kevin Henderson (also a founding member of award winning Shetland supergroup Fiddlers Bid), the mighty Haltadans, the lovely quartet Herkja, talented singer Arthur Nicholson, or the young musicians of Fjanna. And get ready for the Shetland Folk Festival in May, often regarded as the granddaddy of folk festivals.

Go wild about Argyll and immerse yourself in Tiree on a musical journey far out in the Atlantic Ocean off the west coast of Scotland. This stunning island has miles of white sands, a rich history, great surfing and fantastic music. Named after the lighthouse sitting on a skerry 12 miles south-west of Tiree, Skerryvore is a Celtic rock band steeped in the west coast tradition of Tiree. They create a unique fusion of folk, trad, rock and Americana for the 21st Century.

From their early days playing ceilidhs in village halls to performing to festival crowds across the globe, 2020 marks the 15th anniversary of the band. They are great ambassadors to their Argyll homeland and you might remember them in the soundtrack of the Wild About Argyll video. Their funky rhythms, blazing bagpipes, accordions and fiddle are guaranteed to make you happy.

During lockdown, they wrote the poignant charity single Everyday Heroes which went to No 1 in the iTunes charts, with all proceeds in aid of NHS staff and volunteers. Don’t miss their new album Live across Scotland.

Duncan Chisholm is one of Scotland’s most accomplished and expressive fiddle players and composers. Born and raised near Inverness, he creates gorgeous and atmospheric soundscapes inspired by the natural beauty of his native Highlands.

The Strathglass Trilogy – Affric, Canaich and Farrar was named after three beautiful glens in Strathglass. It’s an emotional tribute to the ancestral lands of the Chisholm clan, north-west of Loch Ness. His uplifting, beautiful  instrumental music will take you on a journey through ancient Caledonian pine forests, mysterious lochs, and dramatic mountains. His follow up album Sandwood Bay was inspired by the wild and remote Sandwood Bay in the north west Highlands, often described as the finest beach in Scotland.

More recently, Duncan has been sharing his music with the world from his own home under #COVIDceilidh, helping people to stay positive, safe and connected through music.

Listen to the expressive fiddle airs of Lauren McColl from Fortrose, the original compositions of Mike Vass from Nairn, the inventive fiddle tunes of Adam Sutherland from Loch Ness or the explosive sounds of Elephant Session from Inverness. Check out Scotland’s Big Session at Scotland’s Best Music Pub MacGregors Bar, once a fortnight on a Friday. Or learn a few steps to dance along with sophabulous step dancer Sophie Stephenson from Fort Augustus.

Sian’s enchanting atmospheric Gaelic vocals will transport you to the heart of the Hebrides, from the Isle of Skye to the Outer Hebrides.

The three talented singers Eilidh Cormack, Ceitlin Lilidh and Ellen MacDonald create a unique atmospheric sound. Their stunning vocal harmonies bring the work of long-forgotten female Gaelic bards back to life.  Sian means “storm” or “the elements” and their music certainly showcases the strength and beauty of Gaelic songs.

Voted Up and Coming Artist of the Year at the Scots Trad Music Awards 2017, he was twice finalist in both the BBC Radio 2 Young Folk Awards and the BBC Scotland Young Traditional Musician of the Year. His distinctive style and rich expressive playing will take you on an emotional journey and his self-titled debut album, which entered into the Grammys, will lift your spirits.

You can purchase music from artists direct on their official websites or check out their social media channels, Bandcamp accounts or Patreon pages. Buy CDs, tune books and merchandise, take part in exclusive workshops, or even commission a tune just for you – the perfect gift for Christmas!

Fancy learning an instrument or singing in Gaelic? Imagine getting private lessons from the greatest musicians in Scotland! Many teach and are keen to share their passion via 1-2-1 lessons on Zoom or Skype.

You can also support festivals and music venues by streaming live concerts online. Many festivals have now gone virtual and you can join the artists in actual venues from the comfort of your sofa. Check out the Scots Fiddle Festival (20-22 November) or the Blas Festival (20-30 November). On 26-28 November, you’re in for a treat at the SEALL Festival of Small Halls, on the Isle of Skye. And in 2021, don’t miss Celtic Connections, on 15 January – 2 February.

Find out mroe about Bagpipes, traditional music and ceilidhs

The post Scottish traditional music to listen to on a musical journey through Scotland appeared first on The Blog.