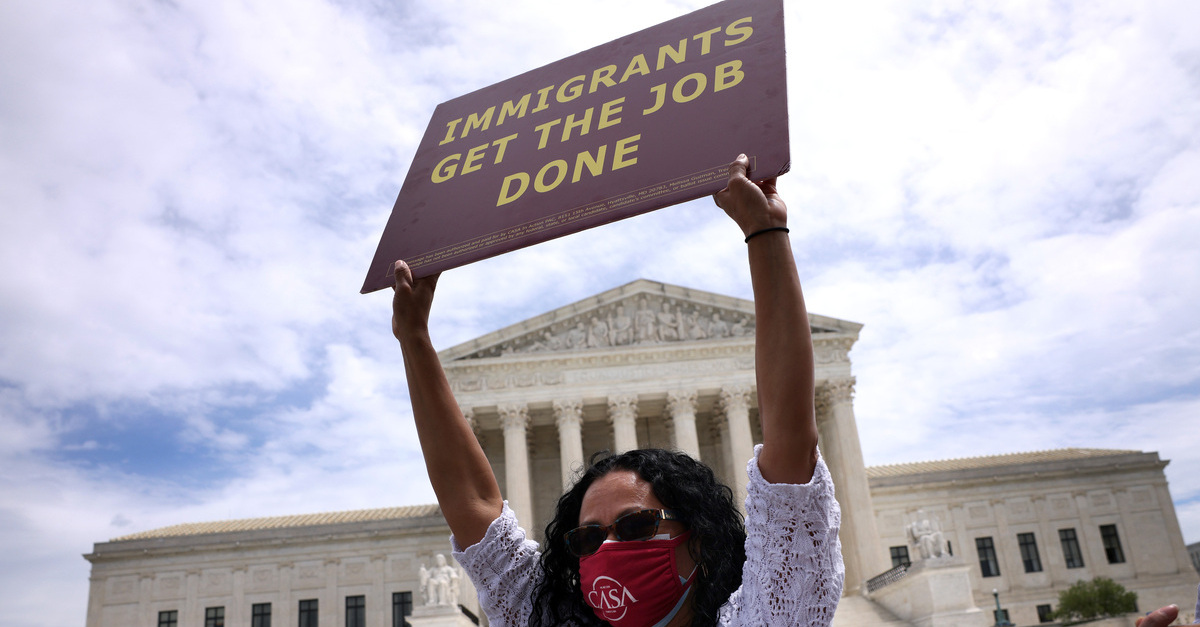 An immigration activist participates in a rally near the U.S. Supreme Court as they demonstrate to highlight immigrant essential worker rights, on May 12, 2021 in Washington, DC. The group marched on Capitol Hill as the Senate Judiciary Committee held a subcommittee hearing on the role of essential immigrant workers in America.

The Supreme Court of the United States heard oral argument in an immigration case on Monday which may set the standard for the role of judges’ discretion in certain cases in which immigrants are requesting green cards.

Stylized as Patel v. Garland, the case involves a process called “adjustment of status,” which allows immigrants physically present in the U.S. to become lawful permanent residents — often known as “green card” holders — without leaving the country first. The process at issue does not create new grounds for obtaining green cards; rather, it allows those who meet the proper criteria to obtain green cards without the intermediate step of leaving and returning to the U.S. The question before the justices is whether an immigration judge has the legal discretion to review.

The plaintiffs are Pankajkumar Patel, an Indian citizen who has lived in the U.S. for almost 30 years, and his wife Jyotsnaben Patel. The Patels have three children.

Pankajkumar Patel applied for an adjustment of status. However, he was denied the adjustment because in the past, he had incorrectly marked “yes” on a Georgia driver’s license application asking whether he was a U.S. Citizen.

Patel was next subjected to removal (or deportation) proceedings before an immigration judge. He again requested adjustment of status, arguing that his response on the Georgia license application had been an innocent mistake. The immigration judge might have agreed with Patel’s defense and approved his request for adjustment on that basis, but the judge simply failed to make the inquiry based on the understanding that judges do not have legal discretion to make an independent decision in circumstances like Patel’s.

The U.S. Court of Appeals for the 11th Circuit sided against Patel, ruling that there is a statutory prohibition against nearly all judicial review of adjustment of status cases. The only cases that the 11th Circuit believes are reviewable by courts are those that raise legal or constitutional questions — as opposed to the far broader category in which a reviewing judge might make a different finding of fact.

Patel now asks SCOTUS to rule that judges do, indeed, have discretion to review a lower denial of adjustment of status. Interestingly, the federal government does not entirely disagree. Although the Department of Justice argues for a slightly different decision-making framework, it argues along with Patel that the 11th Circuit’s ruling should be overturned. Several groups filed amicus briefs supporting the idea of judicial review in these cases, arguing that a ruling depriving courts of the power of review would adversely affect thousands of immigrants with pending applications.

Attorney Mark C. Fleming argued on behalf of the Patels, asserting that the justices should overturn the 11th Circuit’s ruling in accordance with the usual presumption of reviewability. Justice Samuel Alito appeared skeptical, pressing Fleming on whether the proper interpretation of the statutory word “judgment” supported his position in the case.

Justice Sonia Sotomayor returned the discussion to the practical ramifications of the Court’s ultimate ruling.

“Do you how many people applied for adjustment of status that are found eligible but for whom the agency exercises discretion not to grant adjustment of status?” she asked Fleming. He responded that those exact statistics have not been reported, but that the government might be in a better position to answer her question.

Assistant to the Solicitor General Austin L. Raynor argued on behalf of the DOJ, and faced questions from the bench about the difficulty of applying a rule that requires a distinction between some questions that are reviewable by a court and others that are not.

Chief Justice John Roberts and Justice Elena Kagan pressed Raynor on whether the credibility of Patel’s claim that he inadvertently checked the wrong box on the driver’s license application was a matter of fact or a matter law.

Justice Amy Coney Barrett focused her questioning on the difficulty of employing a rule in which courts would have discretion.  “Can you explain how the court is supposed to decide whether the removal would result in extremely unusual hardship to spouse or child or parent?” the justice asked.

Despite the concerns raised by the court, several justices seemed even more skeptical of the position advanced in support of the 11th Circuit’s ruling.  The liberal wing of the court initially dominated questioning as the justices asked pointed questions of court-appointed counsel Taylor Meehan.

Sotomayor characterized Meehan’s position as “want[ing].. to strip both factual and legal jurisdiction” from the judiciary. “Congress knew how to do that and it could have just copied that language,” Sotomayor noted before pointing out, “yet it used distinctive language altogether.” The justice ended by remarking that “at best, the statute is ambiguous,” and that any ambiguity should be resolved in favor of the resumption of judicial review.

Meehan offered the justices some relevant statistics, commenting that the issue at hand affects only “a very small percentage” of adjustment of status applicants. She said that 213,000 adjustment of status applications have been granted this year, and that of the 10-15% that are denied, there is “good reason” for Congress to have expected the applicants to exhaust their administrative remedies before seeking review of a court.

Justice Sotomayor was clearly unimpressed with those statistics, as she asked Meehan: “So we shouldn’t care too much, because it doesn’t affect a lot of people?”

Sotomayor then offered up just some of the ways a decision to eliminate judicial review can immediately disadvantage an applicant, citing work authorization and pathway to citizenship as just some examples.

Justice Neil Gorsuch ended the questioning by positing an inquiry that he prefaced by saying, “I know you’re not going to like the question.” Gorsuch asked Meehan to choose between Patel’s argument and the DOJ’s position, giving each a grade. Meehan answered that both approaches are problematic and would cause problems in future cases.

On rebuttal, Raynor offered the example of a doctor who is in the U.S. legally on a work visa, then applies for and is denied adjustment of status. Because the doctor is not subject to removal proceedings, there is nothing further he can do as an administrative remedy.

“The only way for him to get review,” Raynor explained, “is not under the 11th Circuit’s vision of the statute, but under ours.”