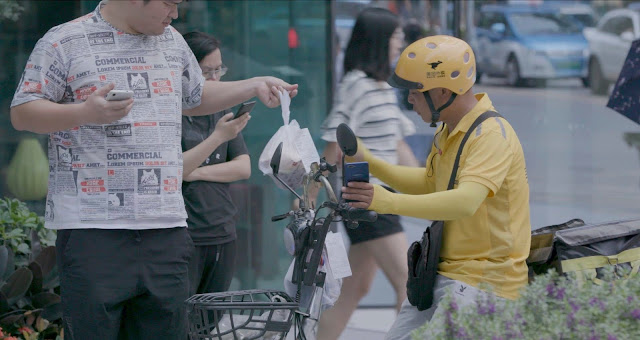 "There is a cost to convenience."

DOXA Documentary Film Festival
UBC professor and filmmaker Shannon Walsh personifies the many perils and economics of being a part of the ever-growing gig economy in her engaging global documentary about the new labour movement in The Gig is Up. Her film about contemporary capitalism excels in putting such a massive worldwide issue of where modern freelance work is moving while balancing it with the human cost of the people on the ground.

Part of the appeal of gig work is flexibility, freedom, and opportunity. However, there's a social price to this kind of convenience within such unreliable markets and industries without the protections afforded to full-time stable employment. Walsh tells us how massive changes in economies are already shifting in terms of how technology is bringing us these services in both hidden and seen ways.

The Gig is Up also explores the underclass of workers we don't see doing "ghost work" and how we value (or don't) their contributions to maintaining society. In fact, what's best about Walsh's documentary is just watching a diverse group of people from all over the world, who really want to work and mostly enjoy working, do their work. However, we soon learn how corporations are repositioning the startup costs of their businesses to freelancers without any of the benefit or investment in infrastructure.

Walsh provides an engrossing conversation about the structures and exploitation behind the apps we use every day to run our lives. There are actual people beyond these services and a much greater context on where we are headed including the likely pitfalls on the horizon. The Gig is Up tempers its strong views by contrasting different voices of workers and what their goals are. It tries earnestly to differentiate the value of a product and a person's labour.

The Gig is Up screens online as the opening film of the 2021 DOXA Documentary Film Festival online and is available to stream from May 6th to 16th with a Live Q&A featuring Walsh on May 7th. It also screens at the 2021 Hot Docs Festival online until May 9th and live in-person as part of the DOXA Drive-In at the PNE Amphitheatre on May 13th.