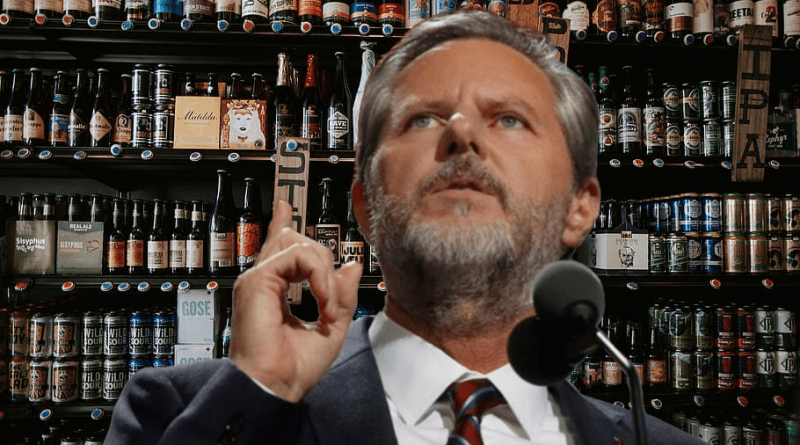 Less than two weeks after Liberty University launched a 10 million dollar lawsuit against their former President, accusing him of conspiracy and breach of contract by sullying their reputation with his filthy yacht behavior, sexual escapades with wife Becki, a habit of “liking” bikini-clad images of his former students, and alleging that he failed to disclose “the issue of his personal impairment by alcohol,” Jerry Falwell Jr. showed up at a multi-family gathering celebrating the 2021 class of seniors, and made his way to the stage.

Grabbing a microphone while appearing visibly intoxicated and slurring his speech, Falwell told the people gathered that he was out with his wife Becki when he heard about the comedy show from his daughter who is a junior at Liberty.

Crashing the party, he congratulated the students and invited students back to his house, telling them “I just want to invite all the seniors to our farm on May 8. We’re going to have the real Liberty graduation.”

He then added afterward: “If you’re not a senior but you date one, you can come, too.”

After the invite, he noted that his daughter was “probably so pissed at me right now,” but encouraged students and attendees to spread the word “as fast as you can” about the event on social media, telling them “we gotta move quickly.”

According to RNS, who interviewed him after the April 30 invitation, he laughed it off, saying that he was just joking about it being the “real party” and that he was inviting them because he wanted to “thank the students because they’ve shown me so much love through all this ordeal. Everywhere I go, they’re so forgiving. They’re so loving. And I want to reciprocate by having them out to my farm.”

When pressed whether or not his actions were appropriate, given his sordid history with some of the students, plus the current action against him which resulted in him resigning in disgrace, he was unapologetic, arguing, “I live right here, and I’ve got a big farm, and I got a bunch of students that I love and that love me, and I’m going to do it…I don’t care whether anybody likes it or not.”

This is not the first time that he’s appeared looking flush and inebriated. Not only was he out of it when he appeared with pants unzipped at the yacht party, but he called in a radio show a few days later trying to explain it away. Just five days after he stepped down from Liberty, his wife called 911 because Falwell had called down while intoxicated and there was blood everywhere.

According to witnesses who were at the party, alcohol was not being served there, and he would have arrived in that state.