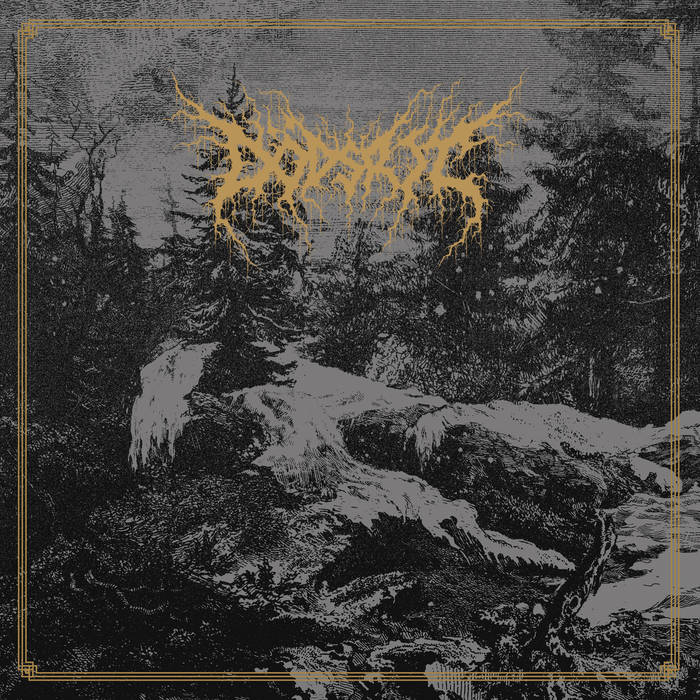 If extreme metal were a big map pinned to a wall and you got a running start and hurled the contents of a bucket of paint at it, the scattered blots would give you something like the following collection of songs and videos — though one of the splashes lands off the map altogether (I put that one dead center in this playlist, surrounded by everything else).

I’m leading off with “Shallow Graves“, because it so thoroughly swept me off my feet right from the start, thanks to the thrill of its opening riff, the pulse-pounding impact of the racing drums, and the grandeur of the panoramic cascades. The song changes, moving through a variety of rhythms and tempos as well as variations in the riffing that alters the moods, though the vocals are blisteringly intense at all times. 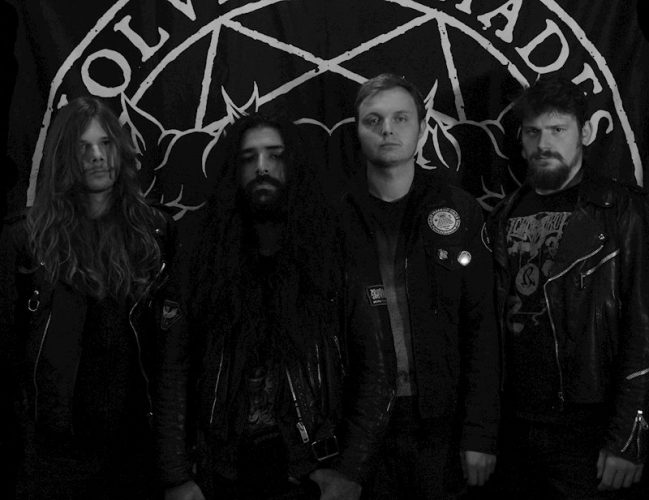 The drumming bounds and blasts, rumbles and cracks, stalks and pounds, and the swirling melodies channel bleakness and sorrow as well as simmering turmoil, fiery distress, and a kind of tragic glory. The bass is also heavy enough to vibrate your core.

The song comes from this Swedish band’s new album Mortal Coil, which will be released on May 28th by Wolves of Hades (vinyl, CD) and The Hell Command (cassette). 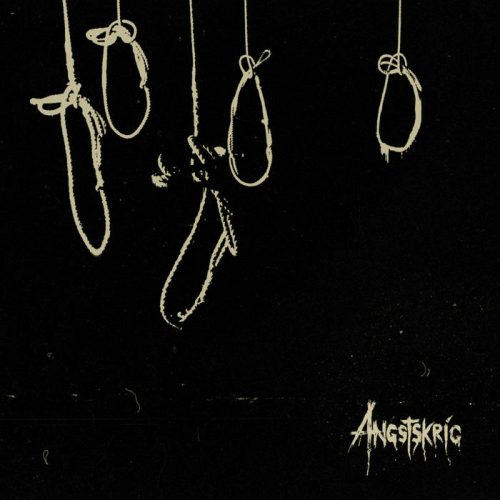 What I’ve chosen next is a video that’s been out in the world since December, but I only just discovered it. I fell for the song immediately, and reacted to the video with equal enthusiasm.

The song, “Lucifer Kalder“, is a big rumbling juggernaut fueled by highly infectious guitar pulses and overlaid by scathing vocal vitriol. It becomes both more grim and more feverish, and as icing on the cake it’s capped by a spectacular, fret-melting solo courtesy of the band’s guest Frédéric Leclercq. The video is also a ton of fun to watch, including the part where this masked, black-clad duo just stand motionlessly for a little bass solo.

Once I latched onto this song I discovered a much more recent video for the album’s title track, “Skyggespil” (“shadow play” in English). It also includes a guest solo, this time by Attila Vörös (a brazen and shrieking one), and it also proves to be addictive, though (like the video) it has a more wintry Nordic mien — though it includes both bursts of more viciously attacking momentum and moments of chilling mystery. (Speaking of mystery, I really want to know what they’re carrying in those burlap bags.)

Skyggespil is set for release on May 28th (via Despotz Records). 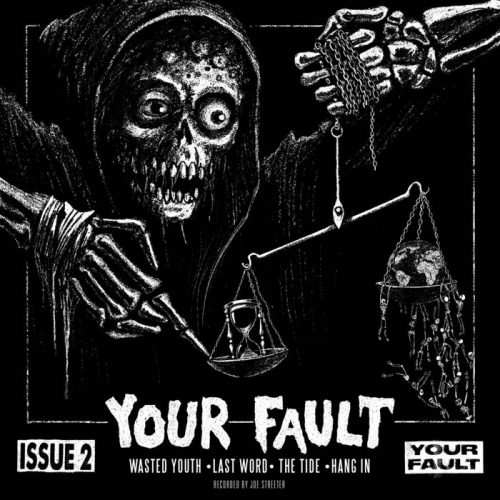 Next up is a brain-scrambling new video for a song off issue 2, an EP released in December by the Massachusetts metallic hardcore band Your Fault.

The song, “Wasted Youth” is a bleak, heavyweight bruiser that groans and heaves, hammers and skitters, and eventually goes into a deranged seizure. Pairing all that heavy-and-hellish instrumentation with larynx-ruining screams in the vocal department just makes the experience even more viscerally intense — which is not to suggest that it won’t also get your head moving, because it definitely will. 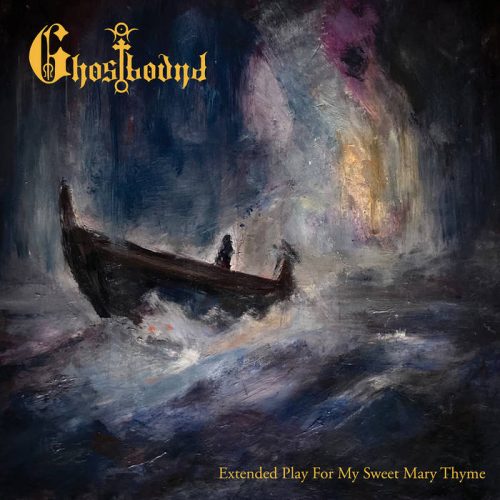 Now we come to the departure from extremity that I said I’d put dead center in this playlist. It’s a new-ish video for a song called “And We Are Already At Sea” from a new Ghostbound EP that was released near the end of March.

Perhaps in part because of the post-punk elements of the song, Alec Head‘s singing reminds me of Morrissey‘s in the days of The Smiths, and that’s one reason why the song so captivated me, but not the only thing. The bright, ringing guitar harmonies and gleaming sweep of the music create a heart-swelling vibrancy and sense of wonder, while the jolting chords and compulsive rhythms trigger reflexive movement — and near the end the music catches fire in an ebullient fever. The video is not only tremendously inventive but also a great companion for the song.

The rest of the songs on this sea-faring EP are equally captivating, in part because they each have their own personalities and stand-out features, and because they undergo unexpected and riveting changes. “Ada, Age of Eight“, for example, features sky-high vocals, electrifying soloing, a passage of symphonic yet soulful grandeur, and a finale of harrowing dissonance and haunting guitar reverberations.

I’ll relent from the temptation to offer further track-by-track comments and just urge you to give this a complete listen, even though it’s a divergence from the usual subjects of our attention around here. 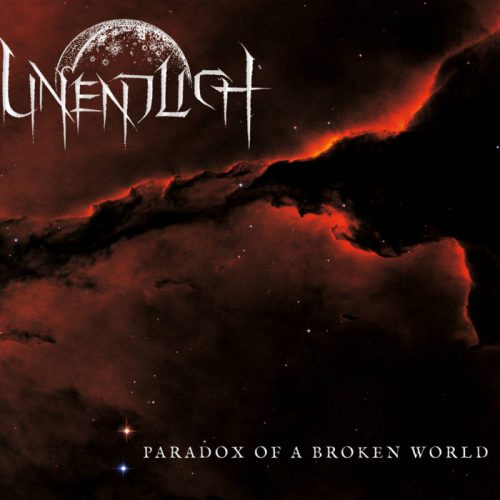 For those of you who were surprised at the inclusion of that Ghostbound EP, we’ll get you back on track with this next song — which explodes in a goddamned firestorm. The blasting drums go at 1000 bpm, the vocals are incinerating, and the riffing is a frantic, searing presence within a grand conflagration of sound that sweeps overhead. When the drums convert to a battering cadence, the riffing becomes more crazed, and when the drums tumble the melody displays a kind of strange ebullience.

The music continues to transform from minute to minute, becoming jittery and jolting, blaring and chiming, and unhinged in its savagery. The entire panoply of sensations is thoroughly gripping, right through the closing reprise of that explosive opening assault. Pure adrenaline overload….

“Wisdom of Suffering” comes from this Maryland band’s new album Paradox of a Broken World, which is set for release on July 9th (and I can’t wait to hear the rest of it). 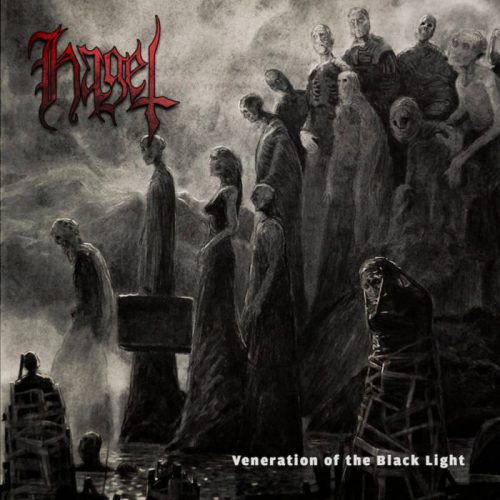 This next song by the atmospheric black-doom band Hagel from Monterrey, Mexico, is eerie and sinister to its core, but also capable of giving your pulse-rate a big kick in the ass. The vocals are utterly monstrous and hateful, and the rhythm section hit hard enough to cause organ rupture. At times the song made me think of classic Greek black metal, but it also pours out doom-stricken misery like congealing blood from a skull chalice, and glittering piano keys enhance to the song’s atmosphere of supernatural sorcery.

It turns out that the song, “Decalogue of Misery“, first appeared a year ago, but I’ve just noticed it because of the announcement that it’s part of a debut album named Veneration of the Black Light that’s now set for release on May 21st by Personal Records. 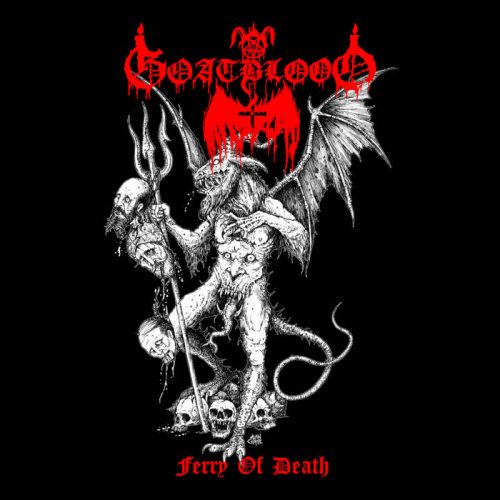 Having nearly reached the end of what I thought I could manage to write about in this collection, it dawned on me that I hadn’t yet included any death metal. And right about then I found this new song by Goatblood. It’s the title track to their new EP Ferry of Death (coming out on April 24th through Dunkelheit Produktionen), and there’s certainly enough death in it (albeit charred death) to check off that box.

The song also wins the prize for heaviest and most disgustingly distorted guitar tone in today’s collection. The track is primitive and pernicious. It staggers like a giant wounded beast but also hammers like pistons, with riffing that becomes a roiling mass of disgusting infection. There are little bits of wailing, slithering melody in the midst of all this caveman brutality and suppurating foulness, as well as belly-deep roaring vocals that add to the horrors. Enjoy!