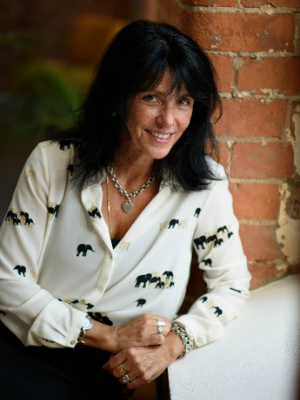 As I matured through the corporate world, I saw that many organizations that don’t succeed in L&D are valuing what you know versus what you share,” says Sharon Claffey Kaliouby. “The learning approaches we’re focusing on are a catalyst for change, in creating opportunities to learn collaboratively to facilitate the business goals.”

As a leader in the field of learning and development (L&D), Kaliouby speaks to her life-long love of learning, why paradoxically breaking our educational conditioning is inherent to professional success, and the quandary of the L&D leadership gender gap.

Learning is About Sharing, Not Just Knowing

Named one of the Top 50 Leaders in Learning & Development in 2019 and honored as Learning Professional of the Year in 2018 by The Learning & Performance Institute, Kaliouby is passionate about helping organizations to drive their goals forward by building individual and organization-wide capabilities through education.

“You can spend your entire life doing something that everybody else thinks you should do,” she advises her own daughters. “Or you can do something you totally love and are passionate about, and feel truly alive. That’s the direction you should always go. Stick with your inner gut and don’t let anyone change your mind.”

Kaliouby worked in-house for nearly twenty years before making an intentional move to Learning Pool, a pioneering full-service customized e-learning provider working across a large international client base, from companies to NGOs to higher education.

Kaliouby speaks emphatically about reframing what we value in and how we experience learning: “As we go through our educational system, and almost anywhere in the world, there is one thing that collaboration is usually called: cheating. Collaboration in the school system is called cheating, so we’re educated not to collaborate.”

In academia, success often means not sharing your knowledge but that flips the moment we exit formal education. She notes women are disproportionately represented among top students but not top executives. The early displaced value on autonomous success can also stunt institutional development.

“Innovative organizations are sharing cultures who want employees to share their success and knowledge with other colleagues. You’re not elevated in the organization based on how much more you know than others, but how much you share the knowledge,“ observes Kaliouby.

Learning that Values Your Participation

With Learning Pool, the L&D objectives begin with asking what learning is going to be most directly valuable to the core organizational goals. The strategic approach is that learners not only comprehend the content, but are also involved in their education, with their participation being a factor in the measure of their learning success. Sharing (such as comments in an online forum) becomes weighted by the richness of knowledge the individual holds and shares, rather than their title.

Kaliouby is increasingly motivated by Learning Pool’s Learning Experience Platform (LXP) Stream, which is designed to enable the self-determined learner to find and to access particular courses they need or want for themselves. She points out that the rush to compulsory online education in the past eighteen months widely replicated the classroom rather than customizing education for the positive capabilities of this medium, and this has potentially created resistance to online learning among a whole generation of students. But at the same time, that challenging experience may compel reflection from those students, based on what they truly needed, that compels developments yet to come in the L&D space.

Going Back to Being Human and Being Learners

When it comes to remote working, ‘upskilling’ and ‘reskilling’ are part of the hot themes right now, and with Covid-19, the L&D field has moved towards the human side of business in many ways – such as skilling up on EQ, capacity for empathy and holistic communication skills.

“Some people that were hired as a CEO in 2018 were not equipped to be the chief empathy office of 2020 or 2021. But what’s nice is the human equation is now being valued, as much as learning data analytics in the scientific backgrounds were highly valued,” notes Kaliouby. “We need soft skills now because we’re all in crisis mode, but I hope it’s more than a trend.”

From her perspective, we’re circling back to the 1990’s when family and kids were invited into the office or gatherings. Whereas in the 2000’s, the 9/11 and financial crises put sustained employment into more jeopardy, and it became safer emotionally not to know each other so personally. With Zoom, we’re invited back into witnessing colleagues in their lives outside of work, and this impacts learning too.

“Now, we want learning to be about the whole person. When you’re learning something in your organization, to better the business goals, you also want to be building for yourself too,” says Kaliouby. “You’re building knowledge that’s going to make you a different, more insightful or more aware person, regardless of what the topic is.”

She notes that for the first time, a lot of people have the space and bandwidth to take up guitar or language lessons online, for example, rather than just be entertained. We are in some way becoming learners again, who wish to be effective in all spherical aspects of our lives.

Why Are There Too Few Women Leaders in L&D?

In 2013, Kaliouby became the co-founder of #WomeninLearning, which actively promotes women in learning and leadership – supporting an awareness of gender equality and an environment committed to a more diverse future. Bringing great talent into an industry is not the same as threading that talent up to leadership, and the gender gap at the top of L&D is astounding considering it’s a predominantly female field.

2019 research data showed that while women are coming into the learning field as 2/3 of support roles, and many assume women lead the field, they actually comprise less than 1/3 of senior authority roles at the leadership level. Compared to a male-dominated field like finance, Kaliouby notes, “It’s even worse news because we have more women in the learning sector, and we’re still flipping it: there’s more men than women leaders.”

#WomeninLearning has raised the conversation, even in the context of her own household: “I see my daughter, who is in the workforce, sharing her salary with her friends and speak adamantly that she can’t understand why the guys over there that didn’t do as well in school are making more money. They’re stating, ‘we’re not going to stand for this and we’re not going to stand for diversity of thought not to be valued’.”

Due to a recent company acquisition, Kaliouby has had the opportunity to become more familiar with Higher Education, and finds the approach to managing gender dynamics intriguing: “In Higher Education, the women actively state they don’t care about the title, but they want to earn equal pay. I think in the corporate world, we focused too much on wanting the right title, but if we’re never going to catch up on the salary, that’s to the side.”

Not only does the notion of not having equal room for women in leadership (“space for one”) work against women helping to bring other women up, but Kaliouby notes that the ‘confidence gap’ has a real basis in hiring trends: “Women are hired on their experience not their potential, and men are hired on their potential,” she says. “And that is the biggest disaster in regards to the gender gap in learning.” Women self-select themselves out of applying for a job if they do not have the exact background and this is even more limiting (we can’t get there if we are not even applying for the roles).

She notes that 94% of C-Suite women have all played a sport, and playing sports builds both a grit and resilience, as well as learning what you’re particularly skilled at, and what you’re not.

So she recommends picking up a new sport: “If you pick up something brand-new, you’ll know what it’s like to start and be an entry level person. You’ll know that awkward feeling, the ability not to fully understand your full map, and you might develop another angle of empathy as well.”

A two-time member of the USFA National gold medal women’s sabre fencing team herself, Kaliouby recently began a couple of new sports, including pickle ball. She accredits her athletic background for giving her a perseverance that has served her professional journey.

A Lifelong Appreciation of Self-Development

“I could have been a full-time student forever. That was always my desire, she says. “I do feel like I’m a lifelong learner now.”

When reflecting back on her passion and love for learning, Kaliouby feels the valuing of education in her Irish Catholic family home in Boston imprinted strongly upon her. She witnessed her father get his diploma while employed as a Policeman, and he emphasized to her that the one thing someone can never take away from you is your intelligence. He went on to become a university professor of criminal justice. Though she lost him young, her own passion for learning today carries on his legacy of the drive to realize further capacities and visions that are seeded within oneself.

Both of her daughters, top achievers academically, carried on the family legacy of valuing education and learned Arabic growing up (with mom auditing class with them as well), as their father is Egyptian. In addition to continuing her sports participation with fencing, pickle ball and more, learning sign language is the next personal stretch that Kaliouby has her eyes set on.

Learning Pool offers innovative learning platforms not only including the LXP Stream, but also a Learning Management System and a Learning Record Store (LRS) titled Learning Locker (one of the most downloaded LRS’ in the world). Learning Pool also offers off the shelf courseware (as well as custom courses). Kaliouby is most proud of the Corporate Social Responsibility courses made available for ALL at no cost on their website – including courses focused on climate change, mental health, stress, anxiety and the uncomfortable truth of racial inequality.