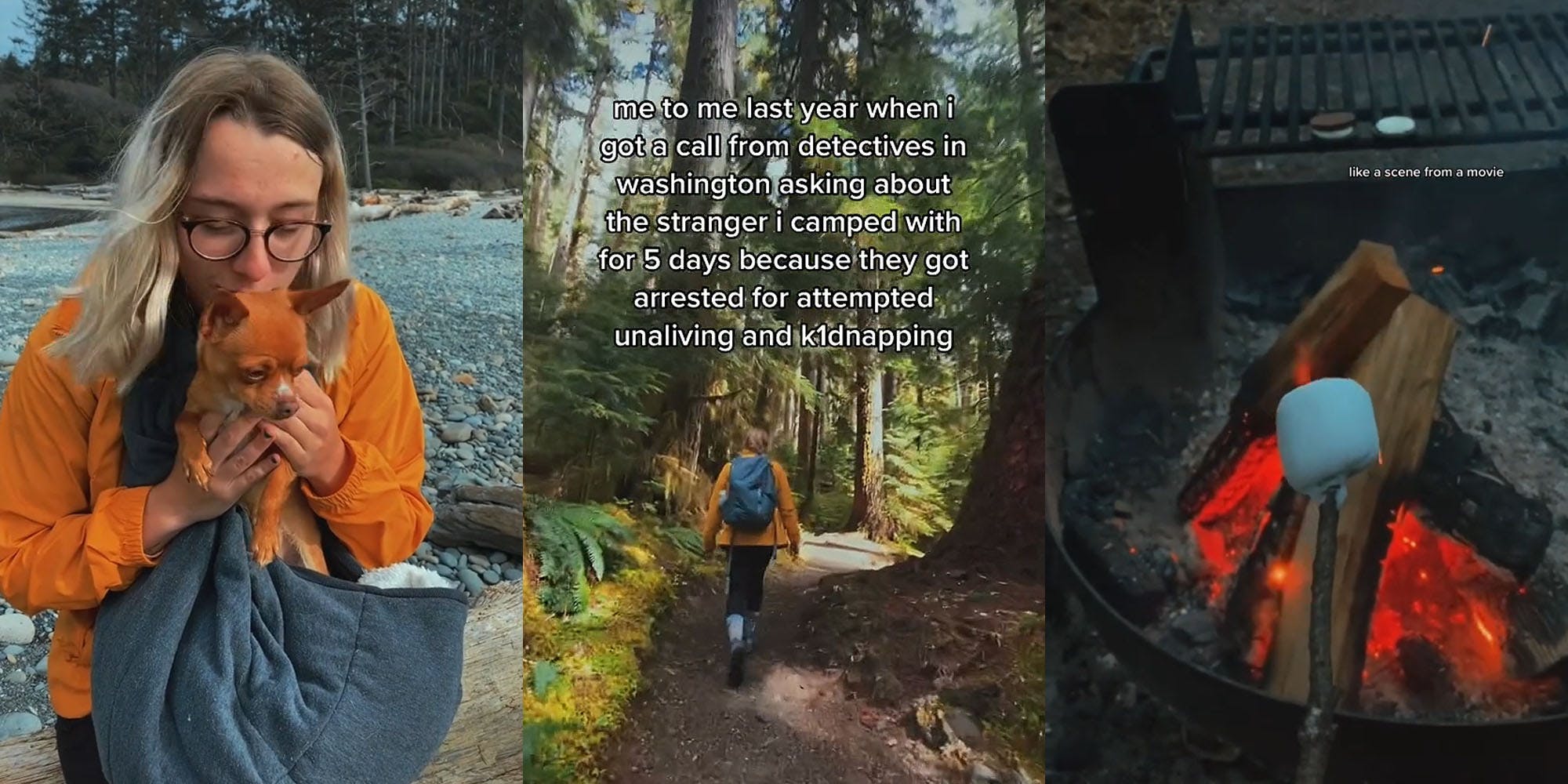 ‘She was seriously unhinged’: TikToker says she camped with a stranger for 5 days who was later arrested for kidnapping and attempted murder

A TikToker claimed she camped for five days with a stranger along the Washington-Oregon border before later finding out that the stranger was arrested for kidnapping and attempted murder. TikTok user Emilie Hofferber (@emilie.hofferber) shared the story of her encounter with the stranger via several viral videos.

According to Hofferber, she and her friend Sara were hiking in Washington state last year when they bumped into a stranger and her dog. At the time, Hofferber says that she got weird vibes from the stranger because of the “subjects she would talk about” but was too polite to say anything. The creator says the stranger ended up tagging along for the rest of the trip and would refuse to leave. However, the stranger’s behavior would allegedly raise red flags for Hofferber for the rest of the journey.

“At this point, I thought maybe I was being too judgmental of the stranger,” she says. After staying with the stranger and Sara for one night, Hofferber got a hotel room alone for one night. She joined them again the next morning.

“This is where the story starts to take a turn,” she says in the video.

Hofferber shares that the three start their journey up the Olympic Coast. While shopping for camping supplies, the stranger allegedly told Hofferber that she didn't have a way to access her money despite claiming to have a well-paying job. The woman also allegedly claimed that her ex-partner had hired someone to steal her dog and was chasing her around the parking lot at the time.

“I saw none of this and don’t think it actually happened,” Hofferber says in the video. While drinking beers at a nearby beach, the TikToker claims the stranger began acting extremely intoxicated after one drink. The woman then allegedly starts calling her dog by a different name.

“We wanted to camp and because I was apprehensive of the stranger I tell the group we should camp in the developed national park campground in Olympic,” she shares. “I still felt off and wanted to make sure we were around other people.”

That night after her friend went to bed, Hofferber claims someone in a cowboy hat approached her and the stranger asking if they want to “party with a stranger.” After declining, both women decided to leave the area.

“You don’t know this but I have a fully loaded automatic [gun] on my hip right now,” the stranger allegedly told Hofferber. “I’ve been on the run from a person for six months and I'm running for my life.” The woman then allegedly became hysterical.

After calming her down, the trio purportedly decides to leave but Sara’s car wouldn’t start. The TikToker says they desert her friend’s car and drive toward Forks with the stranger following behind. During the car ride, Sara allegedly shared that when her and the stranger were hanging out alone, she felt ill and the stranger offered her strong sedatives as medication.

“I have reason to believe the stranger is not who she says she is,” Hofferber told her.

They reserved a shared hotel room in Forks where Hofferber allegedly begins interrogating the stranger about her identity, she says.

“I needed answers and I need them now,” she continues in the video. “As she’s telling me these stories I find so many inconsistencies. At one point in the story, her entire tone changes and she looks at the ground and begins muttering people's names saying that they deserve to die.”

“At this point, I've decided she is seriously unhinged, and am scared to do anything that would upset or disturb her,” Hofferber says. After a couple of “uneventful” days, Hofferber claims they were successfully able to get rid of the stranger as soon as she left to “run some errands.”

After this encounter that left Hofferber allegedly feeling unsettled, she reached out to detectives about the stranger. She then says they claimed the stranger had been arrested for kidnapping and attempted murder.

“The lesson to be learned is to set better boundaries and don't do things you’re uncomfortable with,” Hofferber says in her last video. “You never know if a stranger can be nuts.”

The Daily Dot has reached out to the TikToker via Instagram direct message.

Update 6:06pm CT, May 22: Hofferber told the Daily Dot that she first reached out to the detectives about the stranger. She also noted that it was not the stranger's ex-husband who allegedly hired someone to steal her dog, but another ex-partner.

The post ‘She was seriously unhinged’: TikToker says she camped with a stranger for 5 days who was later arrested for kidnapping and attempted murder appeared first on The Daily Dot.

‘She was seriously unhinged’: TikToker says she camped with a stranger for 5 days who was later arrested for kidnapping and attempted murder