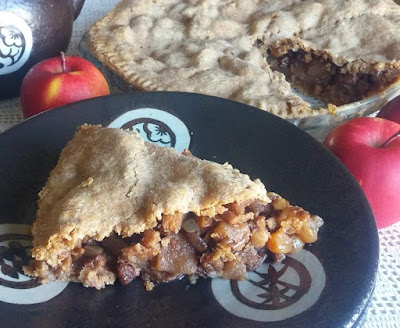 I found this recipe in a cook book from 1904, where it was described as "Shteffun or Baked Apple Pudding". It turned out it came originally from an older, English kosher cook book from 1874, where it was described as Dutch Apple Pie.
The idea of meatless mincemeat is now standard, but even in the 1970s, when I first started to play around with mincemeat, it was pretty universal that it at least contained suet. I, and most of the modern mincemeat cooking world, quickly discarded it as excess to requirements. However, I believe this is one of the very first recipes intended to be mincemeat-like, but without added animal fats (or meat, even, although it was disappearing from it even then). Since suet was used in the crust, I'm not quite sure why this was an issue, but I suppose it did give cooks the option of putting it in a butter-based crust for a dairy meal even if the authors said nothing about it. I went with my favourite dairy-based crust but then I don't worry about keeping kosher.
After all that, when I first read the recipe I missed that it was supposed to be rich and mincemeat-like, and took it as an apple pie with a few enhancements. I decided I liked that idea better, and used more apples and less candied peel, raisins, and nuts than the original recipes called for. I was really happy with the results, although I also had to concede that no, I don't like cakes or pies to have chunky nuts in them, no matter how much I like cakes, pies, and nuts. Next time, I would leave them out but it's up to you; put them in if you do like them in your pastries.
I also left out the sugar, feeling that the dried fruit and candied peel supply plenty, but taste your mixture and add a little if you like. I thought it was fine without. As always with apple pies, it's good to use a mix of varieties for some to be soft and juicy and some to stay chunky.
8 servings
2 hours - 1 hour prep time

Make the Filling:
7 or 8 large apples, several varieties
2 tablespoons lemon juice
1/4 cup light raisins
1/4 cup dark raisins or currants
1/4 cup mixed peel
1/3 cup finely chopped nuts (almonds, hazelnuts, or pistachios)
3/4 teaspoon cinnamon
1/8 teaspoon ground allspice
1/8 teaspoon ground cloves
Peel, core, and slice the apples. Put them in a pot with the remaining ingredients. Bring up to a simmer and cook, stirring occasionally, until the apples have softened and reduced in volume. Add a little water if they seem like sticking, but don't let them get too soupy (it will depend quite a bit on the varieties being used). When they are ready, remove them from the heat and keep them aside until ready to fill the crust and bake. This can be done up to a day in advance; keep refrigerated until needed.
Make the Pastry & Bake:
2 1/2 cups whole spelt flour
2 teaspoons baking powder
1/2 teaspoon salt
2/3 cup unsalted butter
1/4 cup buttermilk
Preheat the oven to 350°F.
Put the flour, baking powder, and salt into a mixing bowl and mix. Grate in the butter. Stir in the buttermilk until it forms a stiff dough. Cover and let rest for 10 minutes, then divide into 2 pieces of about 60% and 40%.
Roll out the larger piece of dough on a lightly floured sheet of parchment paper. Transfer it to a 10" pie plate. Roll out the remaining dough to fit the top. Put in the filling. Transfer the rolled out top to the pie, and pinch the edges sealed. Cut some holes in the top for steam to escape.
Bake for 1 hour at 350°F until golden brown. Let cool before cutting.
Last year at this time I made Slow Roasted Duck with Gravy.
Source: seasonalontariofood